Kenya Airways will boost capacity to China and switch its Nairobi-Bangkok-Hong Kong service to instead transit via Dubai from Apr-2013 as the airline seeks to take advantage of growing Chinese interest in Africa’s economic growth prospects.

The airline's overall Nairobi-Dubai frequency will increase from daily to 10 times weekly. The carrier will also add three weekly frequencies on its Nairobi-Bangkok-Guangzhou service moving to a daily service.

Kenya Airways CEO Titus Naikuni said China has been looking for economic opportunities in Africa and the daily service will facilitate movement of traders and goods between these regions, noting: “This daily service will contribute towards sustainable development in Africa by linking it to the rest of the world".

This, combined with an extensive codeshare agreement with Etihad, means Kenya Airways is well positioned to advance its 10 year growth plan and position Nairobi as the Eastern African hub over Addis Ababa, particularly addressing China as well as Indian markets.

Kenya Airways offers about 1,500 seats on the Nairobi-Dubai route using a Boeing 767-300, increasing to nearly 2,200 in Apr-2013. The carrier competes against Emirates which operates about 4,000 seats on the route.

Between the UAE and China, Kenya Airways will join seven other Middle Eastern and Chinese carriers. The market is dominated by Emirates which offers about 14,200 one-way seats per week. 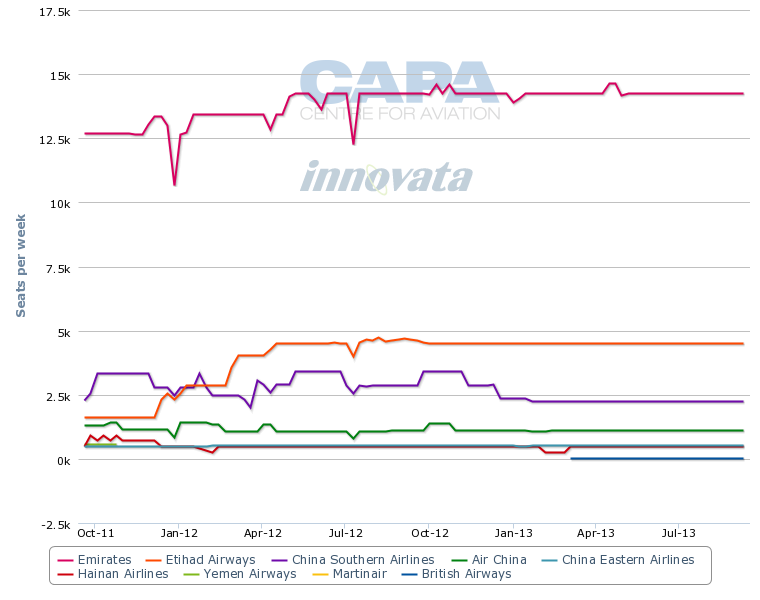 Between Dubai and Hong Kong, Kenya Airways will come up against Emirates and Cathay Pacific who together operate about 9,700 seats against Kenya Airways’ approximately 650 seats. 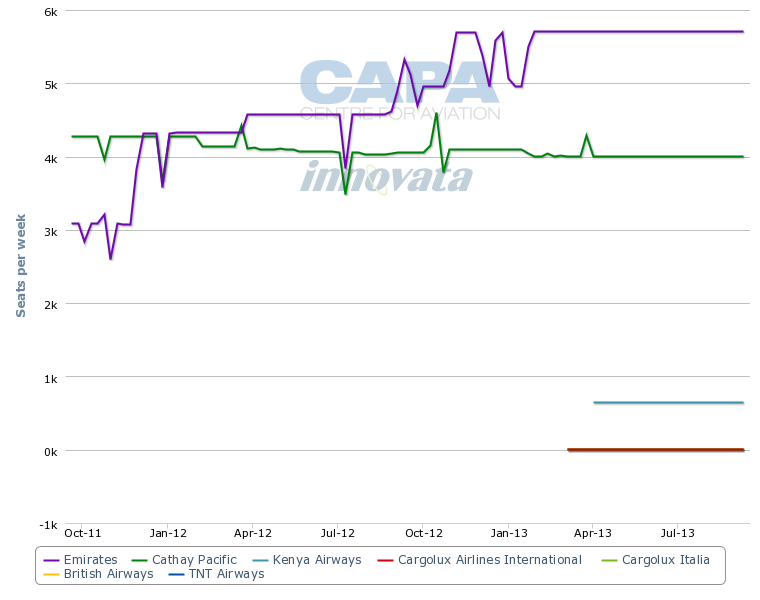 Kenya Airways has the Nairobi-Bangkok route to itself, but was competing in a crowded market between Bangkok and Hong Kong where Cathay and Thai Airways hold sway offering a combined 26,000 seats.

Increasing frequencies to daily on Bangkok-Guangzhou will elevate Kenya Airways into a distant third place with about 1,500 one-way seats per week behind Thai and market leader China Southern Airlines. 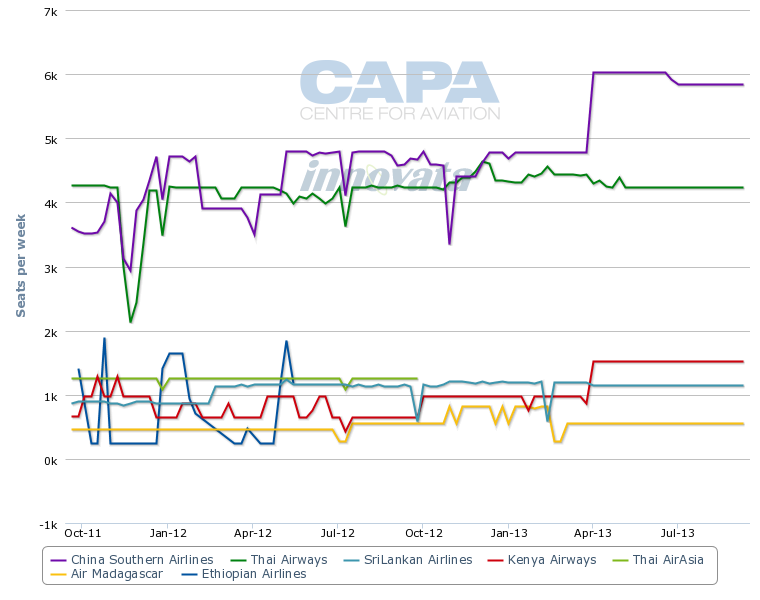 The changes coincide with the start of an unrelated reciprocal codeshare agreement with Etihad that paves the way for greater collaboration and cost savings that will boost Nairobi’s challenge to Addis Ababa as the gateway to Eastern Africa when it takes effect from 01-Apr-2013.

As part of the deal, Kenya Airways will launch a new three times weekly Nairobi-Abu Dhabi service from about Jul-2013 to improve connections in support of Etihad’s current daily service. The alliance is the latest from Etihad to cut across marketing alliance boundaries: Kenya Airways is a member of SkyTeam, complete with a 27% equity investment from Dutch national carrier KLM. Etihad and SkyTeam leaders, Air France-KLM concluded a "strategic alliance" in Oct-2012.

KLM has also held a cornerstone stake in Kenya Airways since 1995 and is the carrier’s biggest  shareholder after the Kenyan Government which holds 29%.

Etihad is likely to be interested in taking advantage of Kenya Airways’ extensive access across the sub-Saharan region, including Abidjan and Accra in the west, Johannesburg in South Africa and Dar es Salaam in the east, all of which are served by United Arab Emirates rival Emirates, as well as Qatar Airways.

Etihad could also bolster Kenya Airways’ Asian network which is limited to Hong Kong, Guangzhou and Bangkok using its own metal. Etihad could add to that Beijing, Shanghai and Chengdu in China, Seoul in South Korea, Manila in the Philippines as well as Kuala Lumpur, Singapore and Jakarta in Southeast Asia.

But Kenya Airways will look to its Chinese SkyTeam partners, China Airlines, China Eastern, China Southern and Xiamen to provide the traffic feed in China through codeshare agreements.

Kenya Airways already codeshares with China Southern on the Dubai-Guangzhou route. The airline expanded its footprint in Southeast Asia by signing a reciprocal codeshare agreement with fellow SkyTeam member Vietnam Airlines in Nov-2012. The agreement covers daily services between Nairobi and Bangkok and on to Hanoi and Ho Chi Minh City in Vietnam.

Etihad could also enhance Kenya Airways’ access to India, adding to its Mumbai and Delhi services; Etihad operates to nine points in India. Kenya has a reduced but still substantial expatriate Indian community dating back to the 19th century. The UAE flag carrier is currently in discussions to acquire a large minority stake in India's Jet Airways, which would further strengthen the value of such a link.

Kenya Airways also has its sights set on adding another two destinations in the Indian subcontinent.

Tourism traffic could also be available from Australia, where Etihad is in alliance with Virgin Australia. If the agreement extends to Australia it will replace a previous codeshare Kenya Airways had with Qantas between Bangkok and Sydney which was cancelled as a result of Qantas’ alliance with Emirates. (Equally, as the Qantas/Emirates codeshare rolls out, Qantas may seek to use Emirates' metal to exercise Australian rights to Kenya.)

Kenya Airways expects a 25% reduced profit for FY2013 after posting a first half loss, but plans to expand its way out of difficulties

Kenya Airways is Africa’s fourth largest carrier and among the few consistently profitable African airlines, but it issued a profit warning in Nov-2012 for the FY2013 expecting full year profits to be lower by more than 25% on FY2012.

Kenya Airways CFO Alex Mbugua expected the second half of the financial year to be “much better” but the carrier would not be able to recover the KES6.55 billion (USD77.8 million) lost in the first half compared to the same period in FY2012.

The airline is pursuing an aggressive and ambitious 10-year growth plan which revolves around building its Nairobi hub as an African gateway for traffic to and from Asia, particularly China as well as India.

The strategy is nothing if not ambitious and includes a target of flying to every African capital city by 2014.

Kenya Airways’ African network currently spans 44 destinations, almost exclusively in the sub-Saharan region, with strong links between its hub in Nairobi and Western Africa. In the other direction, its northern Africa access is limited to Cairo. 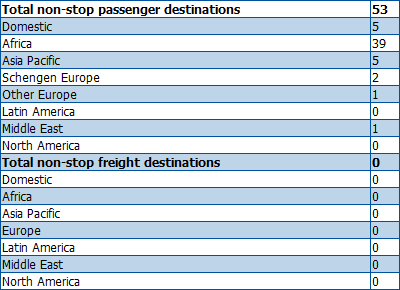 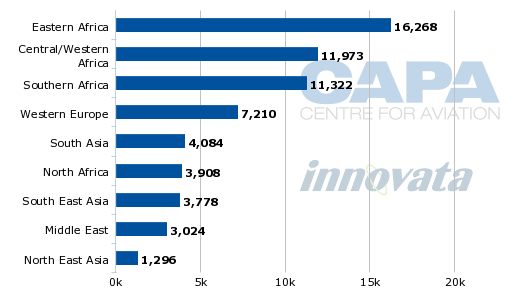 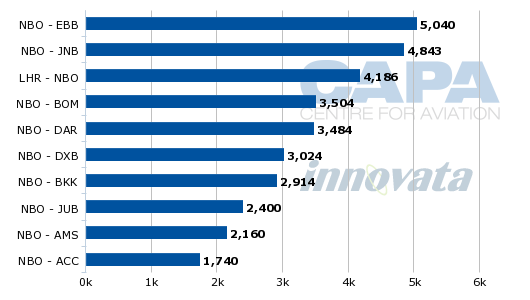 Kenya Airways enjoys a little over half the total share of Kenya’s seat capacity offering about 87,500 one-way seats per week. 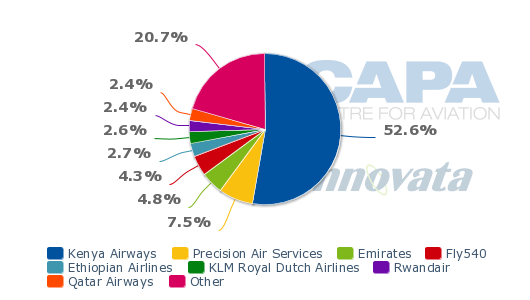 Both KLM and Air France are important parts of Kenya Airways' strategy, having grown the number of destinations to Kenya available from Amsterdam Schiphol and Paris Charles de Gaulle airports.

KLM is expanding its African network to 15 points and MD Erik Varwijk said in Jul-2012 that: “KLM sees great growth opportunities in Africa” having launched service to Luanda in Angola and Lusaka in Zambia in 2012.

Kenya Airways operates a fleet of 43 aircraft and has 11 aircraft on order direct from manufacturers, including nine Boeing 787-8s with delivery dates between 2013 and 2019. The carrier reportedly also secured financing for a 777-300ER in 2012 and plans to expand its fleet to 76 aircraft by FY2017. It then plans to acquire at least 43 more aircraft over the following five years.

Kenya Airways received its first Boeing 737-300 passenger-to-freighter converted aircraft on 20-Mar-2013. A second 737-300 will be converted and delivered to the airline in Jun-2013. The conversions allow the carrier to grow its cargo business and will initially operate on the routes of Entebbe, Brazzaville, Yaounde, Mwanza, Luanda, Antananarivo, Kigali, Kinshasa and Douala.

Kenya Airways fleet as at Mar-2013

But despite their local rivalries, Kenya Airways and Ethiopian Airways have a mountain to climb to overcome the massive advantage of the Gulf carriers. Dominated by Emirates and its strong Asian links, Etihad and Qatar Airways too are able to funnel traffic between east, west and south into Africa over their United Arab Emirates hubs, all the time strengthening their network power.

Middle Eastern airlines have more than doubled their capacity into Africa in the past 10 years. By way of contrast, European carriers – historically the long-haul gateway providers – have added just 18% over that time.

Kenya Airways is also expanding its influence in the African market and the value of Nairobi as a continental hub by aligning itself with smaller carriers. This includes promoting greater cross-border cooperation and fostering economic development among nations which jealously guard their independence, despite the clear evidence that this has been a fundamental cause of their problems.

In Dec-2012 Kenya Airways and RwandAir announced plans to form a strategic partnership and build stronger relations including improved synergies in scheduling, reservation systems and a combined FFP. The partnership will also strengthen the airlines' cargo, maintenance and flight training operations.

At the AFRAA AGA in Nov-2012 in Johannesburg, a number of smaller carriers called for greater support from the continent’s big four, Kenya Airways, Ethiopian Airlines, South African Airways and EgyptAir, to help develop the entire industry.

Air Namibia is another airline with which Kenya Airways has shown interest in a partnership that would benefit trade and tourism between those two countries, as well as providing mutual value to the two airlines. 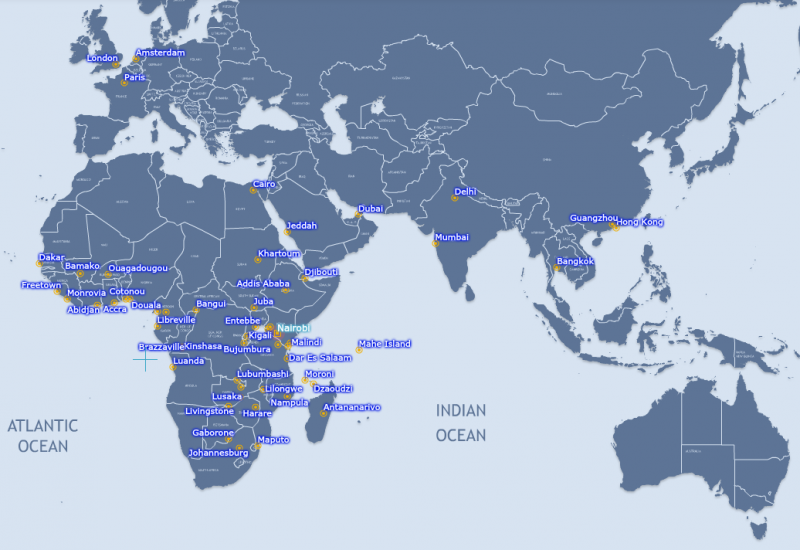 Kenya Airways is well placed to progress is growth plans aided by a potentially lucrative codeshare partnership with Etihad which enhances access to all points eastward. The partnership should result in a significant increase in traffic to and from its Nairobi hub and will allow the carrier to fast track its plans to offer more services to Asia. For Etihad too, this represents an important foothold in the valuable and generally more stable Eastern Africa.

Fears of widespread violence following Kenya’s general elections on 04-Mar-2013 have so far been averted despite the election of Uhuru Kenyatta as president, beating prime minister Raila Odinga by a slim margin. Mr Kenyatta has been summoned to appear before the International Criminal Court in The Hague, charged with crimes against humanity for his role in orchestrating post-election tribal violence five years ago in which more than 1,100 people were killed.

The election result is meanwhile being challenged by Mr Odinga through the courts which must decide by 30-Mar-2013 whether to confirm Mr Kenyatta as president or whether a new election needs to be held.

The decision has the potential to lead to widespread upheaval in the country, damaging its booming economy and Nairobi’s ambitions of becoming a continental gateway. But, after the previous experience, much greater caution is apparent, hoping to avoid further disruptions.