Juneyao Airlines partners with Air China and China Eastern – is it a candidate for Star Alliance?

China's privately-owned Juneyao Airlines is seeking a broader path. Thoughts of partnerships have progressed from ambition to reality, with Juneyao interlining with Singapore Airlines and more recently forming reciprocal codeshares with both Air China and China Eastern. Despite a not insignificant fleet of 30-odd A320 family aircraft, Juneyao remains relatively unknown. That will change as the carrier seeks deeper international partnerships. The Shanghai-based carrier has already caught the eye of Star Alliance, which has a void in its network since the 2010 exit of Shanghai Airlines following that carrier's acquisition by SkyTeam's China Eastern.

But for now, independence of a global alliance seems to be the objective for Juneyao. There are a number of independent airlines to have leveraged a strong domestic network to become friends of many, and not just from one alliance.

The codeshares with Air China and China Eastern are different, with little route overlap. China Eastern is top dog in Shanghai, but Juneyao has more Shanghai slots than China Eastern could ever hope to gain by growing organically. Likewise for Air China, which is trying to build up its Shanghai presence to compete with China Eastern. These are duelling ambitions and Juneyao is in the prize. No doubt it has already received a quick lesson on managing partners.

Since its establishment in Sep-2006, Juneyao has built up a 9% capacity share in Shanghai when amalgamating figures for the city's Hongqiao and Pudong airports. Although this sets it behind the big three, 9% is not insignificant, especially considering Shanghai's airports are slot-restricted. There is no opportunity for a competitor to have organic growth to claw in to that 9% market share.

Juneyao's share of the total domestic Chinese market in Jul-2013 is about 1.8%. 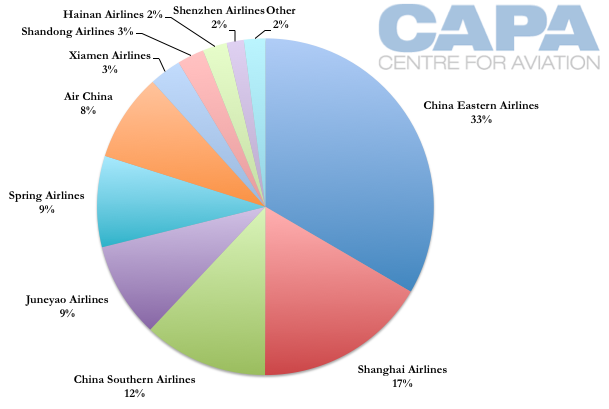 Would Juneyao fit into the Star Alliance?

Juneyao is about three-fourths the size of China Southern in Shanghai, and Juneyao is also bigger than Air China in Shanghai, which at first blush makes it a larger partner for domestic connections from international Star carriers. 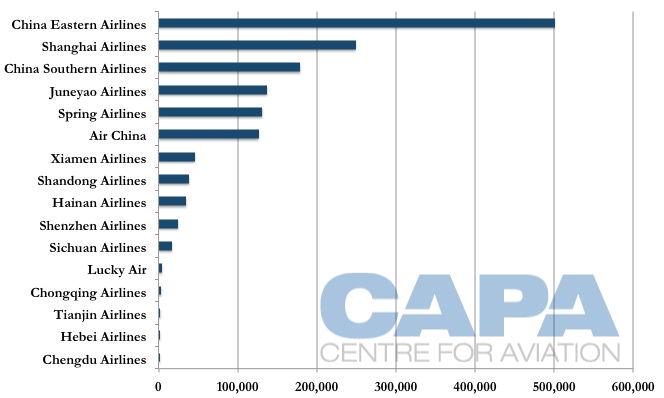 Juneyao is disadvantaged by being a relative new entrant in China's domestic market, meaning it has not been able to secure as many slots at Shanghai's convenient near-downtown airport of Hongqiao.

About 59% of China Eastern's group domestic capacity in Shanghai (including Shanghai Airlines) is from Hongqiao while Juneyao has 52% of its capacity from Hongqiao. Juneyao's growth will increasingly be concentrated at Pudong, where there is slightly more room with slots, and a forthcoming slot expansion programme will increase that.

The silver lining is that Juneyao's large and growing capacity at Pudong would be attractive to Star as Juneyao could facilitate onwards connections without passengers needing to change airports. Pudong is home to most international flights, including all long-haul services, while Hongqiao is primarily a domestic airport, save for very limited flights from key regional Asian cities like Hong Kong and Tokyo.

Star might be interested in boosting its overall Chinese presence (it has Air China and Shenzhen Airlines), and adding Juneyao would increase Star's domestic capacity by 10%. Star's overall share of the domestic Chinese market would increase only from about 21% to 22.5%. 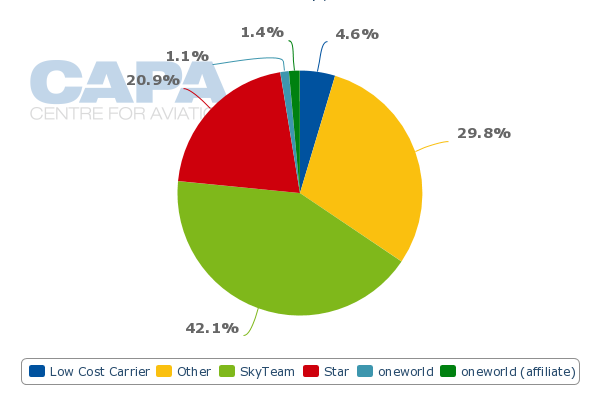 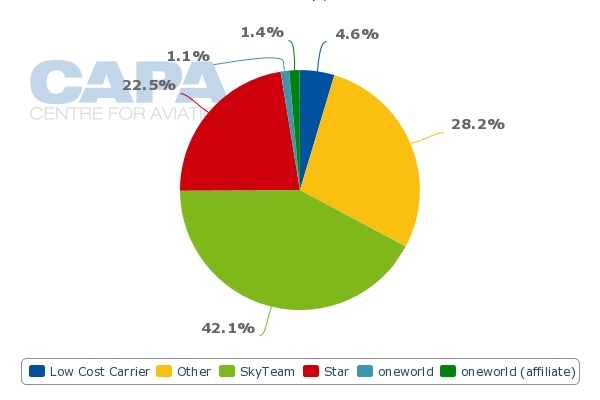 But of more immediate interest to member airlines is feed within China. Shanghai Airlines had been a member of Star Alliance until it was acquired by SkyTeam's China Eastern and left Star to join SkyTeam in 2010. Star had been advantaged in having a carrier based in China's two key cities of Beijing and Shanghai. In 2010 at the time of its withdrawal, Shanghai Airlines had only 33% of its Shanghai capacity in Pudong whereas Juneyao in Jul-2013 has 48% of its Shanghai capacity at Pudong.

Juneyao seems to have lined matters up in its favour: it has attracted the attention of the mighty Air China, China's flagship carrier that has a strong hand in Beijing's policy and is also Star's lead member in China. But it is early days and Juneyao so far is betting on the independent path. Carriers in other countries with a strong domestic market hold like WestJet, Gol, Virgin Australia and JetBlue have shown the success that comes from working with a suite of partners rather than those in any single alliance.

Private airlines, with their lean structure, are a good bet for growth – if allowed

Juneyao may be successful if small, but its future looks positive: China's private carriers are lean as they do not suffer from the baggage of mergers or classic inefficiency syndromes that emanate from being a state-owned enterprise. Juneyao and others are capable of high growth, pending the right relationships with all-yielding regulators. Juneyao had astronomically high growth late last decade, but in the last two years has slowed annual growth to "only" 20% or so. But this is still higher than China Eastern's domestic growth in 2011 and 2012 of 6%. 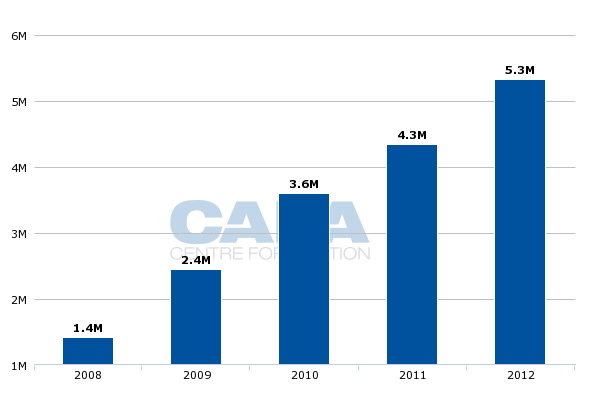 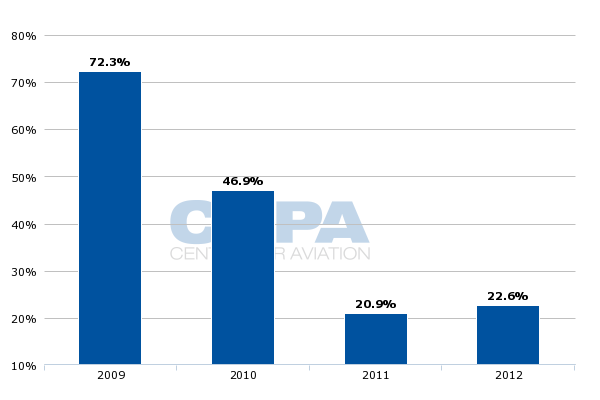 The growth is also less than Juneyao planned; the government controls aircraft imports and in recent years has sought to put the brakes on private carriers to prevent them from taking too much market share from the state-owned companies. Juneyao and Spring's deliveries earlier this year were slowed, apparently for this reason. Preliminary figures for 2013 show growth to be up 20-40%, despite a more sour mood at China's clunkier and government airlines. 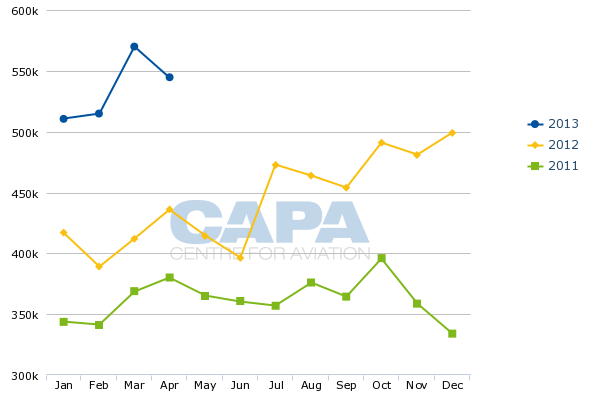 Juneyao should find itself enjoying a warmer government reception after growing closer to Air China and China Eastern with codeshares on each. But there will be sways: Air China has more Beijing clout whereas China Eastern has more Shanghai clout. Juneyao's simultaneous partnership with both Air China and China Eastern is seemingly conflicting - although logical when considering broader factors. Air China was a more logical partner as it and Juneyao could combine their smaller status and grow scale whereas Juneyao would have been a smaller contributor to China Eastern given China Eastern's presence in Shanghai. But China Eastern was not about to stand by watching as its rivals joined up, so was able to use its weight also to partner with Juneyao, balancing the strategic developments.

Juneyao's codeshares with Air China and China Eastern do not cover as many key trunk routes from Shanghai, mainly because Juneyao has been kept off them. Only recently it managed to secure a Shanghai-Beijing service, but not at an ideal time and with no scale compared to China Eastern and Air China. 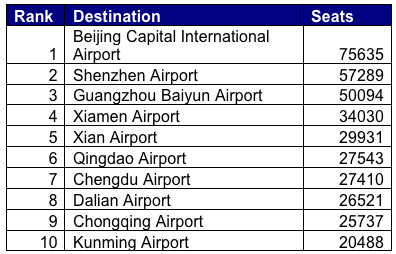 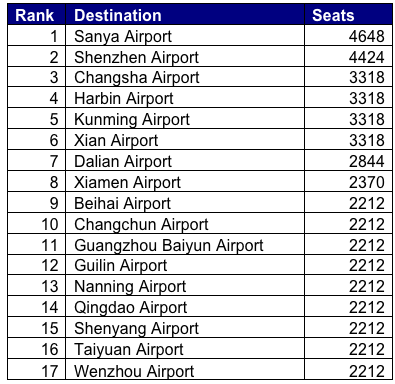 Air China and China Eastern are both codesharing on Juneyao's Tianjin and Yichang services, but that is the extent of overlap. All codeshares, so far, are only on Juneyao's domestic network and not its burgeoning international services.

An initial statement from Air China and Juneyao says they would also codeshare from Shanghai to Chongqing and Chengdu but these schedules have not been loaded as of Jul-2013. The two have flagged additional pairs could come in the future. With the exception of Yichang, where Air China with Juneyao's code will have the same number of frequencies as competitors, Air China will be the underdog, although the Juneyao codeshare helps it narrow the gap and even, in some cities, rise above other competitors (with the codeshare on seven of Juneyao's Shanghai-Guilin weekly flights, Air China can offer more frequency than China Southern's seven weekly flights).

Three of the cities have been brought to a double daily offering because of the codeshare.

Juneyao's codesharing on Air China is light with only one city, Guiyang. Juneyao's combined offering with the Air China codeshare will allow it to sell more frequencies than Shanghai rival Spring. Although Spring is a LCC, the two compete for similar business.

China Eastern is generally using the Juneyao codeshare to increase its already strong presence: with Juneyao's codeshare China Eastern will have 147 weekly flights to Xi'an (another China Eastern hub); its next competitor will have a pithy 14. Baotou will become a monopoly. China Eastern has done well; this level of domination would not be allowed in countries with stringent anti-trust regulators.

Juneyao codes on more China Eastern than Air China flights, and for various reasons. There are competitive interests, such as coding on seven of China Eastern's weekly Harbin flights, supplementing Juneyao's 28. That gives Juneyao a total offering of 35 – more than Shanghai competitor Spring's 28. Juneyao has 14 weekly flights to Taiyuan but will also code on 14 China Eastern's flights, giving it a wide gap over the only other competitor in the market, Hainan with seven weekly flights. In other markets Juneyao's flights are all or primarily from one Shanghai airport while China Eastern's are from the other Shanghai airport, increasing flexibility.

A complex partnership with adequate solution

The end result of this strategic development is that the competitive focus remains on the big airlines.

China Eastern on a given city-pair sells its own capacity, plus that of Shanghai Airlines, as well as China Southern and Juneyao. So, the big get bigger.

But Juneyao does not come away empty-handed: it receives a nice lift from traffic feed as a result, which could be a platform for future growth with foreign airlines. Juneyao can also gain a revenue advantage over local competitor Spring, whose foray into ancillaries will create a large revenue stream in due course.

And, although Juneyao's growth with Air China may be influenced by China Eastern, for now the solution is adequately workable, although probably could not be classified with that oft-used Chinese phrase, "win-win".

The complexity of these mere codeshares underscores the difficulty of larger air transport matters in China, from China Southern's A380 deployment struggles, to oneworld's attempt at finding a mainland member, to overdue reform of airspace.

Until these artificial barriers are lifted, we can expect to see a patchwork of often-incoherent strategic moves, as all airlines seek to work within the existing constraints to achieve workable outcomes.