Jetstar Group CEO Bruce Buchanan stated the airline is still looking into other airport options in northern Australia, despite the Qantas Group recently reaching a new pricing agreement with Darwin International Airport. According to Mr Buchanan, Darwin is one of the carrier’s most expensive airports and it expects it to become even more expensive in the next few years.

He stated the new agreement is “not what I'd call a fantastic outcome but we realise that in an environment where there's one provider of these services, we could continue to argue for years and years and years or we can say we understand the situation we've got and we've decided to negotiate a path that at least lets us deploy the existing aircraft we have committed in Darwin”. Due to the airport’s high costs, the carrier is unable to properly achieve its “virtuous circle” concept, in which it aims to increase capacity utilisation to decrease unit costs.

Despite the lack of infrastructure choices in northern Australia, Jetstar remains committed to its concept for a northern hub. The LCC has considered constructing its own airport in the Northern Territory to bring competition to the region, but has been unable to receive approval from the Australian Government. Mr Buchanan stated the carrier will now have a “serious think” and resume talks with the Northern Territory Government and Northern Territory Airports regarding “our internal competitive dynamics for capital” as there are a number of other “opportunities” wanting the carrier’s aircraft and future capital.

Jetstar now plans to operate up to nine additional weekly services to/from Darwin, with the first new service to commence during Dec-2010, with an increase in Darwin-Denpasar frequency. The carrier added that it plans to launch Darwin-Manila multiple weekly A320 service early next year, subject to regulatory approval. Additional domestic growth for Jetstar from Darwin will include new services from Adelaide, Sydney and Melbourne delivering more than 3000 additional weekly seats to Darwin, with the carrier to operate more than 70 weekly services from the Territory hub by early 2011. The expansion from Darwin is aligned to the LCC’s pan-Asia strategy to enhance its route network between Australia and Southeast Asia. In the 12 months to Jun-2010, the carrier handled 930,000 passengers through the Darwin hub, double the prior year’s number of international travellers entering Australia on Jetstar.

Following Mr Buchanan’s comments, Darwin International Airport CEO Ian Kew admitted the airport is more expensive than other Australian airports. However, Mr Kew argued the carrier is receiving value for money at the airport, as it offers “very good infrastructure facilities” and “excellent services” and is open 24 hours. The airport is in discussions with all other airlines at the airport on a new pricing regime and hopes to conclude talks “shortly”. Darwin Airport now plans to invest approximately AUD98.3 million into further enhance facilities over the next 10 years, including a AUD33 million terminal expansion. The airport last year cancelled plans for a AUD60 million terminal and airport infrastructure upgrade project, claiming Jetstar refused to pay a further AUD2.50 per passenger in airport charges on top of the AUD14.00 it was already paying. Jetstar responded stating charges were only part of the issue that led to the suspension of the expansion plans.

Darwin Airport’s passenger and landing charges are certainly among the most expensive in Australia, up there with the country’s biggest airports by traffic, Sydney and Melbourne Tullamarine. Cairns Airport, from which Jetstar operates a number of its Japan services, also has especially high passenger charges compared with the country’s other smaller airports. 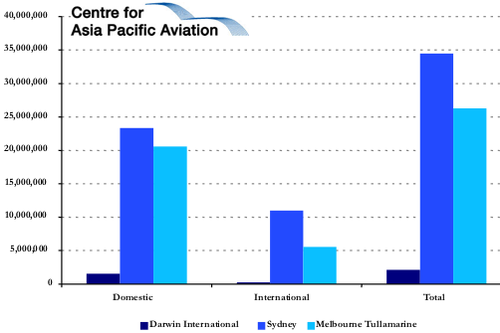