Two Canadian airlines that have been attempting to become airborne for years, Jetlines and Lynx, appear to be finally making their debut in 2022.

But the odds of their success remain tough to predict.

Although numerous start-ups worldwide have chosen to launch during the pandemic, Canada is a unique market, and there is little doubt that the country’s largest incumbent airlines will defend their status.

Jetlines readies for launch with slight changes in its model

Jetlines’ origins date back to at least late 2013, and the company has targeted numerous launch dates throughout the time since. In 2014 it announced an order for five Boeing 737 MAX narrowbodies.

The airline has also altered its strategy throughout the years.

At the time Jetlines planned to launch service in the summer of 2018, its network strategy was based on seasonal travel patterns in Canada, and the company named two secondary airports – Toronto Hamilton and Waterloo – as its initial bases.

Now, at the beginning of 2022, Jetlines is targeting a launch early in the year with Airbus A320ceo narrowbodies, and the airline projects growth to a fleet of 15 aircraft by 2025. Those aircraft will be configured in a single class, economy configuration.

Previously, Jetlines has billed itself as an ultra-low cost carrier (ULCC), but its current marketing language is more vague. It will start operations as a tour operator, with flights into sun destinations in the US and Mexico.

The airline is also establishing Canada Jetlines Vacations and is partnering with its former parent company, Global Airlines Crossing, in jointly marketing GlobalX Air Tours flights from Toronto Pearson to Miami and Fort Lauderdale for an eight-week period beginning in February 2022.

Once Jetlines gains all the necessary regulator approvals for its own launch, it will operate those routes with its own aircraft. It also plans to operate scheduled airline services.

Lynx adds more ULCC competition from a base in Western Canada

The charter operator Enerjet has also been working to establish a ULCC since the middle of the past decade, and now has emerged with the new brand Lynx. The start-up has declared that it is “Canada’s new ultra-affordable airline.”

The airline is sticking with the ULCC business model and has firm orders and lease agreements for 46 737 MAX aircraft scheduled for delivery during the next seven years. Lynx expects to take delivery of three aircraft early in 2022.

Its roster of executives includes CEO Merren McArthur, who has served as CEO of both Tigerair Australia and Virgin Australia Cargo. Its founder and chief operations officer is Tim Morgan, who also was a founder of WestJet.

Lynx will be based in Calgary, which is the home of Canada’s second largest airline WestJet.

Data from Aviation Week’s CAPA show that those routes are already well served. Air Canada and WestJet operate on all the pairings, and the ULCC Flair also offers service on most of the routes, with the exception of Calgary and Vancouver to Kelowna.

Is there space in Canada for two new entrant airlines

Flair is growing rapidly, and recently outlined an ambitious fleet expansion from 12 Boeing narrowbodies to 20 by the summer of 2022. Its vision is to have a fleet of 50 aircraft by 2025.

Additionally, Porter Airlines is slated to begin adding 30 Embraer E195-E2 aircraft to its fleet this year and will deploy those jets from Ottawa, Montreal, Halifax and Toronto Pearson International airport.

As Canada’s smaller airlines race to expand and capitalise on what they believe is pent-up demand, the obvious question is can the market support such rapid growth?

In the short term, many of Canada’s airlines are opting to cull their schedules as the Omicron variant of COVID-19 continues to spread rapidly and upends airline operations.

Over the longer term, the question is whether Canada can support two large airlines, three ultra-low cost airlines, and a new airline whose business model straddles low cost and vacation packaging.

But Lynx and Jetlines continue to believe that stimulation opportunities exist in Canada’s market as the recovery, likely delayed by Omicron, continues.

There is also the possibility of overcapacity in the market place as these start-ups move closer to launch. Data from CAPA and OAG show that Canada’s domestic ASKS will rise approximately 16% above 2019 levels in late Jun-2022. In pandemic terms Jun-2022 seems far off in the distance, and there is always the possibility that future variants of the coronavirus will crimp demand. 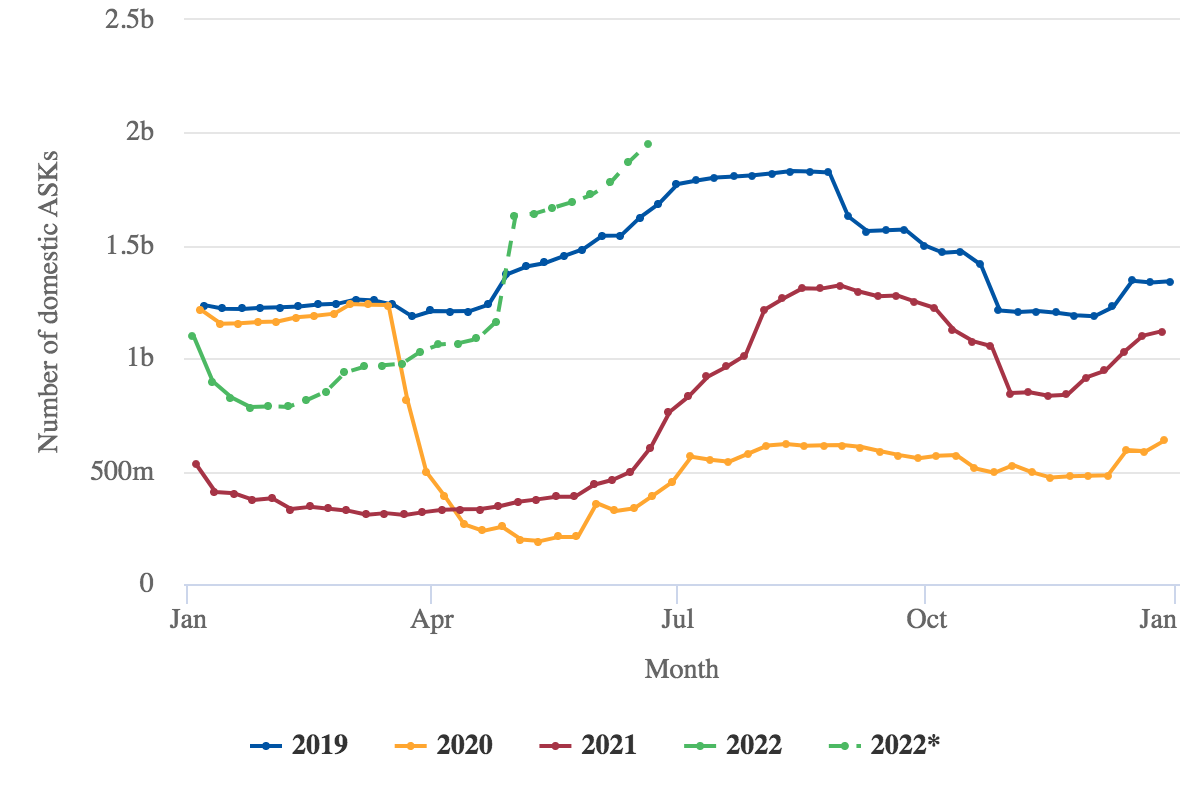 * These values are at least partly predictive up to 6 months from 24-Jan-2022 and may be subject to change.

But if capacity levels remain at current projections the recovery in yields will slow, and make it tough for Canada’s operators to reach pre-pandemic performance in some financial metrics this year.

The market will dictate the fate of Canada's new start-ups

After years of working to enter Canada’s aviation market, the debuts of Jetlines and Lynx appear to be a reality. Each airline has ambitious plans to grow rapidly and believes that there is room to reach those growth targets.

But ultimately market forces will decide the fate of each airline, and if their ambitions can be met.