JetBlue continued the trend of most US carriers turning strong financial performances during 3Q2013 as its profits grew 57% year-on-year to USD71 million driven by a demand environment the carrier deemed as healthy.

The carrier is still battling some cost inflation as FY2013 unit costs excluding fuel and profit sharing are projected to rise between 2.5% and 4.5%. JetBlue stresses it is taking measures to battle the unit cost inflation, noting its sharklet programme for its Airbus A320 fleet to lower fuel burn and fleet changes that include the deferral of 24 100-seat Embraer 190s to support a fleet of 60 of the smaller jets.

Even as JetBlue is taking steps to whittle away at unit cost pressure it has experienced for the last year, the carrier is fielding questions about how it intends to proceed with margin expansion and if it will hit its return on invested capital targets.

Accompanying JetBlue’s nice bump in 3Q2013 profits was a 10% rise in top-line revenues to USD1.4 billion. Despite a 8% jump in operating expenses to USD1.3 billion, JetBlue during the quarter bolstered its operating revenue by 35% to USD152 million and increased its operating margin by 1.9ppt to 10.5%. 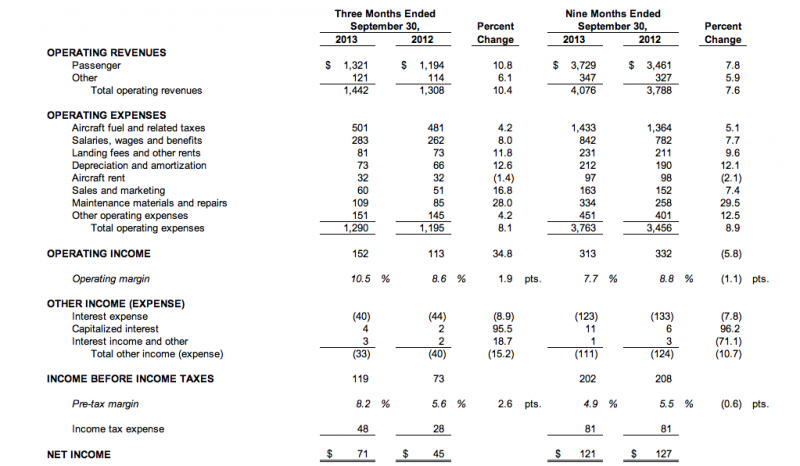 On a unit basis, JetBlue’s results were equally impressive as passenger unit revenues increased 5.4% year-on-year during 3Q2013 on 5% yield growth. The increase in yields was supported by a 6.5% jump in average fare to USD164.

JetBlue does not break out unit revenues by regional entity, but CFO Mark Powers did note in an earnings discussion with analysts that revenues in Latin America and the Caribbean outpaced the system average.

The carrier’s passenger unit revenues increased 5% in Jul-2013, 3% in Aug-2013 and 9% in Sep-2013. Mr Powers attributed the strong revenue performance in Sep-2013 to strong close-in booking demand in JetBlue’s short-haul markets from its Boston focus city, “reflecting the success of our efforts over the past year to de-seasonalise the network and increase corporate travel”.

At the end of 2Q2013 JetBlue explained that it would adjust its capacity downward slightly (back to previous estimates issued earlier in 2013) for 3Q2013 mainly during the lower-demand shoulder period which typically begins in September. In previous years JetBlue has often increased capacity during that time to de-peak from the busy summer season and target more corporate travellers.

The unit cost pressure JetBlue has been battling for the past year did not abate during 3Q2013 as unit costs excluding fuel and profit sharing increased nearly 5%. As has been the case, maintenance was the major culprit – accounting for roughly 50% of the increase. During 2013 the major maintenance challenge has been engine expense on the GE CF34 engines powering the Embraer 190s. JetBlue has now fashioned a power-by-the-hour agreement with the manufacturer to smooth out the expense.

Mr Powers and JetBlue CEO Dave Barger laid out the pillars of the carrier’s cost-reduction strategy going forward. A large component is a fleet rejig that entails deferral of 24 E-190s from 2014 to 2018 to 2020 to 2022. Conversion of 18 current model A320s to A321s and an incremental order for 15 current model A321s and 20 A321neos. The re-engined neos are scheduled for delivery beginning in 2018.

The larger-gauge 190-seat A321s (in standard configuration; a subfleet of 11 A321s is being configured with a premium cabin) are estimated to have a 10% to 15% lower unit cost than the 150-seat A320 currently operated by the carrier.

On its current Airbus fleet, JetBlue plans to retrofit 110 aircraft with sharklets starting in 2015. The carrier estimates a 3% fuel savings from the installation of the drag-reducing devices on the A320’s wingtips.

The various fleet changes should reduce JetBlue’s aircraft purchase obligations by USD200 million through 2016. However, the carrier did admit a capex increase of USD1.8 billion after 2018 as a result of latest changes to its fleet plan. Mr Powers explained that the Embraer deferrals essentially offset the 15 incremental current model A321s JetBlue has ordered. 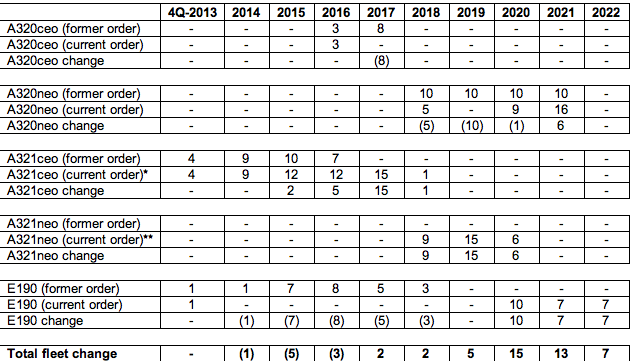 Obviously all those changes do not even begin to take hold until 2015, so JetBlue executives were queried as to how they intend to tackle annual margin expansion after sitting in a 7% operating margin range for roughly the past three years. Mr Barger remarked that 2013 is essentially a tale of two semesters as JetBlue had a sluggish 1H2013 driven by the maintenance cost pressures and weaker than expected demand.

He believes the momentum of 3Q2013 will carry into 4Q2013 and that bodes well for operating margins during 2014. Mr Barger did not offer specific margin guidance for 2014, but highlighted JetBlue’s network strength in Boston, New York and South Florida as certain markets reach maturity.  He also believes growing ancillary revenues could drive margin growth as JetBlue continues to leverage its “Even More” product suite (which should generate USD165 million in revenue for FY2013) and readies for the impending launch of on-board Wi-Fi.

The carrier is planning more two-way codeshares, which should also drive increases in partnership revenue. It currently only has a two-way codeshare with Emriates while its all of its other codeshare partners are one-way deals. Mr Barger stressed there are plenty of levers to pull to increase margins on an annual basis.

JetBlue believes it is too early to declare ROIC for 2013

JetBlue management was also queried about its stated goal of increasing its ROIC by roughly 1ppt annually. During 2012 JetBlue’s ROIC was 4.8%, and Mr Barger remarked that it was somewhat too early to state if the carrier would meet its return targets in 2013.

He again referenced the carrier’s weaker performance in 1H2013. JetBlue would not be the first to miss targets in that metric as Southwest Airlines has previously tempered its expectations of achieving a 15% ROIC.

Using similar language as Southwest Airlines in describing the outlook for 4Q2013, JetBlue executives remarked that the unit revenue outlook for Nov-2013 is “choppy” since the busiest travel days of the year after the US Thanksgiving holiday will slide into Dec-2013. But that should make unit revenue performance in Dec-2013 even stronger as the post Thanksgiving period combined with the regular holiday bookings should result in a strong performance for the month.

Even as JetBlue recorded strong 3Q2013 results and looks to improve its fortunes in 2H2013, the looming capital expenditure of USD1.8 billion after 2018 and the carrier’s lack of commitment to ROIC improvement appears to be raising some questions within the investment community.

The carrier assures it is laying the foundation to sustain momentum for the long haul, and its consistent profitability should allay some concerns. With the upcoming debut of its new premium product Mint and the scrutiny its unit cost challenge have garnered, JetBlue may need to issue stronger assurances that all of its efforts and investments will create sustained profits for the long haul