North and South American airline stocks soared higher on Thursday (22-Jul-2010), after another day of improved financial results from carriers, including JetBlue, Continental Airlines and Alaska Air. Shares were also boosted by gains in the wider market, with the Dow (+2.0%) advancing on further better-than-expected earnings.

JetBlue (+8.5%) was the day’s biggest gainer after reporting a net profit of USD30 million for 2Q2010, compared to a profit of USD20 million in the previous corresponding period.

Capacity is expected to increase between 6-8% in the third quarter and for the full year.

Continental Airlines net profit on the up

Continental Airlines (+3.7%) also reported improved earnings during trading, with a net profit of USD233 million for 2Q2010, compared to a loss of USD213 million in the previous corresponding period. Its per share result of USD1.46 diluted earnings, or USD1.60 per share excluding merger-related costs and other special charges, beat average analyst expectations of USD1.51, according to Thomson Reuters.

Operating profit also rose for the period, totalling USD328 million, compared to a loss of USD154 million in the previous corresponding period.

Based on expectations of continued momentum in every segment, UPS has increased its guidance for 2010 adjusted earnings to a range of USD3.35-3.45 per diluted share, a 45-50% increase year-on-year.

Elsewhere, AirTran (-1.3%) and Allegiant (-0.7%) were the only two carriers to end trading lower, following disappointing results released the day prior. 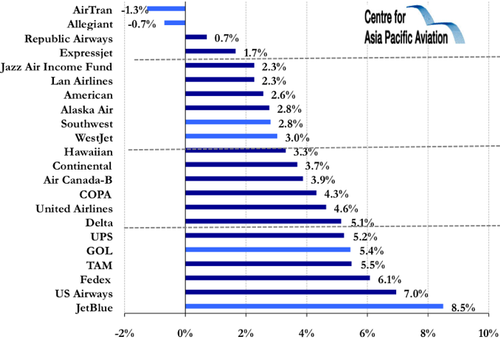