JetBlue down on share issue, WestJet, US Airways lose, while Delta, AirTran up solidly

JetBlue (-14.7%) lost further ground after yesterday's announcement of a share issue, WestJet (-8.6% - see below) and US Airways (-4.2%) also lost significant ground. Meanwhile, Delta (+4.8%) gained well in a negative market and AirTran (+10.9% - see below) clawed back a very solid gain as oil prices turned down again.

See also the discussion of Southwest and JetBlue unit revenues for May-2009.

Sentiment on Wall Street was ambiguous yesterday, starting off looking very negative, but pulled back by the day's end to end only down by 0.75%. Bu the early falls spooked European and currency markets, causing the US dollar to make some gains - with which, 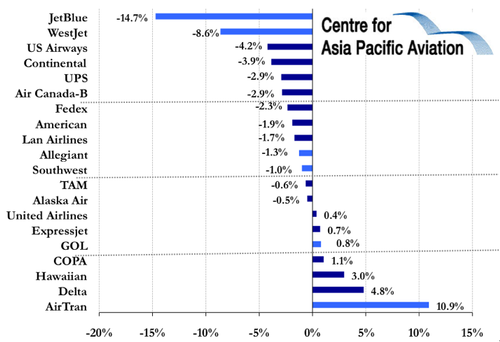 Reporting weak May traffic data, WestJet CEO, Sean Durf,y had a sombre outlook for yield expectations for the second quarter of 2009: "A continued weakened economy and aggressive pricing are leading to reduced fare levels, making it a difficult quarter. RASM in the second quarter is showing significant declines, with an anticipated drop of 16 to 18 per cent year over year."

However, " While these challenges are comparable with what the North American airline industry is experiencing, we believe we are better positioned than most to return to stronger RASM results when the economy begins to rebound."

Despite not so good traffic results for May, AirTran sailed up strongly on an upgrade by Bank of America analysts, from "underperform" to "buy" - and buy they did.