Setting aside the impact of a provision for possible claims related to historic flight delays, the Dart Group increased its underlying operating profit by 3% in FY2015. This was driven by its leisure travel segment, which now aggregates its leisure airline Jet2.com and its package holidays business Jet2holidays.com and accounted for almost all of the group's profit.

However, operating margin slipped slightly, both for the group and the leisure travel segment, as costs grew a little faster than revenue. It is no longer possible to ascertain whether the causes of this lay with the airline or the package holidays business (or both), since they no longer report separate results.

We do know that the holidays business has grown in importance to the airline and supplied one third of its passengers in FY2015. Jet2.com is one of Europe's most seasonal airlines, with a seasonal peak weekly seat capacity (Jul-2015) nine times that of its lowest weekly seat capacity (Jan-2015, source: OAG). This strong summer leisure focus risks means that the airline and the group have a lot of their eggs in the same basket.

For FY2015 (year to 31-Mar-2015), the Dart Group reported a 9% drop in net profit to GBP33 million, in spite of revenue growth of 12% to GBP1,253 million. The net result was adversely affected by a one-off provision of GBP17 million in connection with possible compensation claims under EU rules for historic flight delays, partly offset by positive revaluations of derivatives and foreign currency balances.

The underlying operating profit, which excludes these items and better reflects the performance of the business, grew by 3% to GBP51 million.

The Group's balance sheet continued to enjoy robust health, with debt of only GBP9 million and a net cash balance of GBP294 million at the end FY2015 (up 16%). Its gross cash (including money market deposits) of GBP303 million is equivalent to 88 days of revenues (45 days if GBP149 million of restricted cash is excluded).

In FY2015 the Dart Group managed a fifth straight year of increasing operating profit (excluding the flight delay provision). However, since revenue growth of 11.9% was modestly outpaced by operating cost growth of 12.3%, the operating margin dipped by 0.4ppts from 4.4% in FY2014 to 4.0% in FY2015. 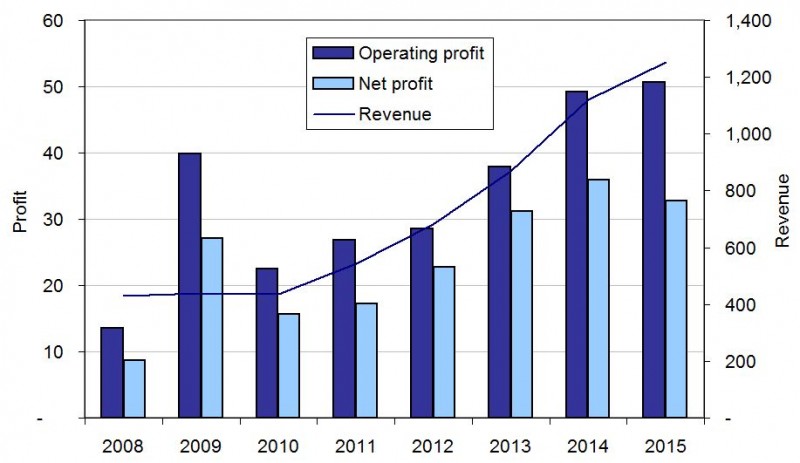 The Dart Group has changed its segment reporting so that the previously separate segments leisure airline (Jet2.com) and package holidays (Jet2holidays.com) are now reported as a single business line. The other segment in the Group, distribution and logistics (Fowler Welch) is an entirely separate business, with a generally less volatile level of profitability. Fowler Welch made an operating profit of GBP3.7 million in FY2015, virtually unchanged from the previous year (GBP3.6 million).

The package holidays business was established only in FY2009 and separately reported from FY2011 to FY2014, during which time its share of the operating profit of what is now the leisure travel segment grew steadily. 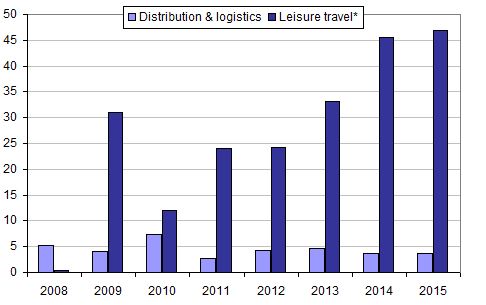 The leisure travel segment also dominates Dart Group's revenue, accounting for 88% of the total in FY2015. Leisure travel revenue grew by 14%, while distribution and logistics revenue fell by 1%.

Leisure travel segment operating profit was up 3%, but margin slips

The leisure travel segment (Jet2.com and Jet2holidays.com) reported an underlying operating profit in FY2015 of GBP47 million, just 3% higher than in FY2014 in spite of the 14% increase in revenue. Its operating margin fell by 0.5ppts to 4.3% as the segment added GBP135 million in revenue, but only a little more than GBP1 million in profit.

As for the Group as a whole, leisure travel has not managed to return to the peak margin achieved in FY2009, when the segment's operating profit was 9.5% of revenue. Its margin has been in the 4% to 5% range most years since then (although it reached 6.0% in FY2011). 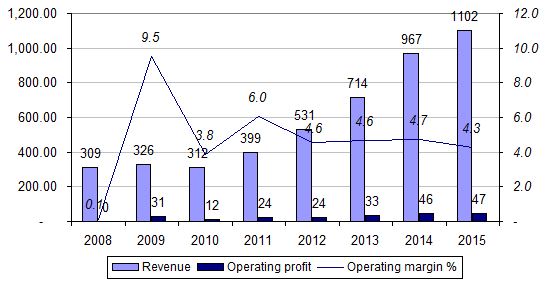 One third of the airline's passengers were also purchasers of package holidays from Jet2holidays.com.

The company attributed its high load factor to an integrated approach to revenue and demand management between the airline and the tour operator, in addition to the higher proportion of flying to the Canary Islands and the Eastern Mediterranean. 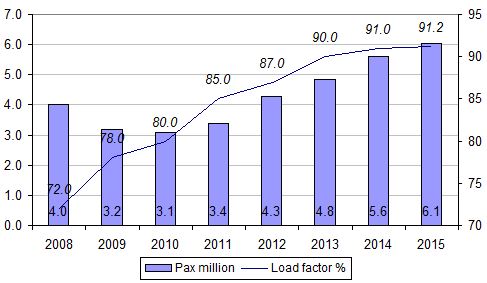 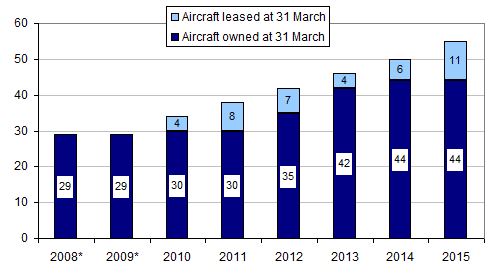 Jet2.com revenue per passenger up 3%

These factors also helped to increase Jet2.com's revenue per passenger, which grew by 3%, although this was slightly less than the 4% increase in average passenger trip length (calculated by CAPA from CAA data). 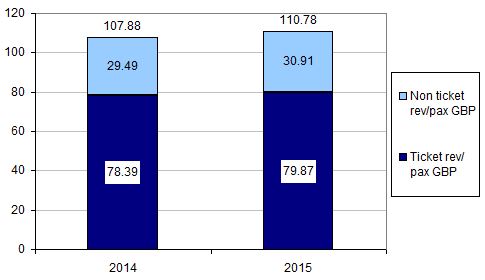 The decision to cease the separate reporting of the results of the package holidays and leisure airline business reflects the growing integration of these two parts of Dart Group's business.

Jet2.com proportion of passengers travelling on package holidays with Jet2holidays.com 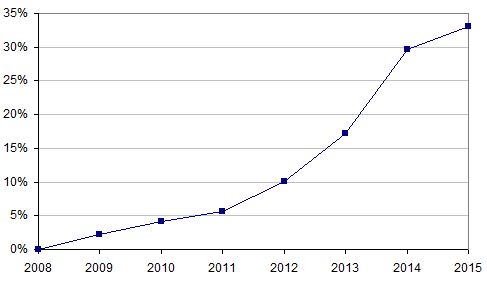 Sales to the holiday business are now a very important part of Jet2.com's business model, but the rate of increase is slowing. Rather than doubling, the growth in holiday customers was 'only' 20% in FY2015. Moreover, incremental holiday sales accounted for 11% of the annual increase in Jet2.com's passenger numbers in FY2011, rising to 54% in FY2014, but this proportion dropped to 39% in FY2015.

The holidays business has been good for Jet2.com, but magnifies the risks of exposure to leisure

The inception and subsequent expansion of the package holidays business has been a successful move for Dart Group and Jet2.com. However, although the relationship between the tour operator and the airline is far from unravelling, Jet2.com's growing reliance on its sister business makes increases its exposure to volatile leisure markets, in particular during the summer season.

This was highlighted a year ago, when the company warned that demand for leisure travel in its markets was less buoyant looking in summer 2014 than it would have hoped at the time. For FY2016, the group says it is "optimistic" that its financial performance "will exceed current market expectations".

Nevertheless, the impact on Jet2.com and Dart Group of any general downturn in demand for leisure air travel would be intensified by weaker demand for its holiday products.