Jet fuel spot prices have risen for a second consecutive week - and quite sharply - as underlying crude prices picked up (WTI +7.2% over the week) on higher than expected US inventories and an easing of the gloom on Wall Street. 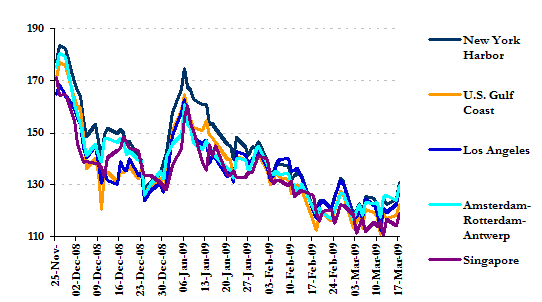 The International Air Transport Association (IATA) is meanwhile preparing to release a revised industry loss forecast next Tuesday, as premium traffic in the new year continues to be much weaker than anticipated.

Asian carriers are expected to be hardest hit by the downturn, with a big revision expected to IATA's forecast (in Dec-2008) of a USD1.1 billion combined loss in 2009. Director General & CEO, Giovanni Bisignani stated, "the shocking slowdown in Japan, the region's largest market, and China, the region's fastest-growing, makes this forecast look optimistic".