Jet Airways shares soared 13.2% on 04-Dec-08 as the broader Indian market got a lift from an unexpected fall in the national inflation rate to a seven-month low. This gives the Indian central bank more room to move to stimulate the slowing economy. A 100 basis point cut in interest rates is now broadly expected within the next four weeks.

Meanwhile, Virgin Blue's shares went the other way, falling 10.8% yesterday. ABN-AMRO issued a ‘sell' rating on the stock and cut its target price to AUD0.25 per share (from AUD0.75) on concerns that economic headwinds will slow domestic travel over the next six to 12 months. The broker stated fuel hedging policies also limit the benefits of a falling oil price. ABN AMRO stated, "November has already seen some softness in demand and the next six months are unlikely to be much better...as Australia will see a recession in 2009". It added V Australia's launch on 28-Feb-09 "could also not come at a worse time, with international demand weak".

Virgin Blue CEO, Brett Godfrey has meanwhile warned consumers and regulators to be vigilant about competitive issues flowing from the proposed Qantas-British Airways merger. Mr Godfrey told The Australian, "in the absence of too much detail, vigilance is the key". Virgin Blue's shares opened 1.6% lower today at AUD0.295 per share. 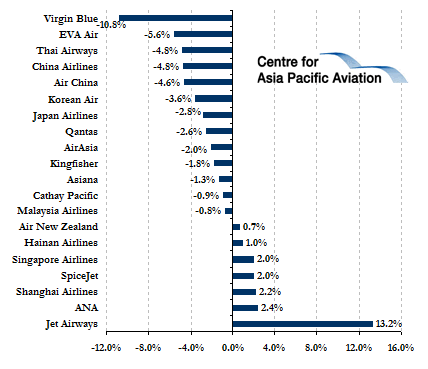