Shares in Jet Airways rose 6.2% on Friday as rumours circulated the company intends to announce further jobs losses. The airline decided to release a statement that failed to rule out further cuts, noting, “the implications in terms of fleet and personnel requirements, both operational and supporting staff, will be established as the details are being drawn up as we go ahead” (see full release below).

Kingfisher’s shares rose 6.3%. India’s governing coalition led by the Indian National Congress has been decisively returned to power, but faces major challenges in reviving the fortunes of the aviation sector, especially the plight of Air India. See the upcoming edition of the Monthly Essential India for a full election wrap and outlook for the sector.

Elsewhere, China Southern surged 11.4% on Friday, while Singapore Airlines closed steady (after surging in morning trade) as investors digested the ramifications of its move to give away its stake in SATS to shareholders as an ‘in specie’ dividend. The carrier's latest traffic report for April will influence trading today.

Qantas closed down 1%, while Virgin Blue added 1.9% in a soft market. 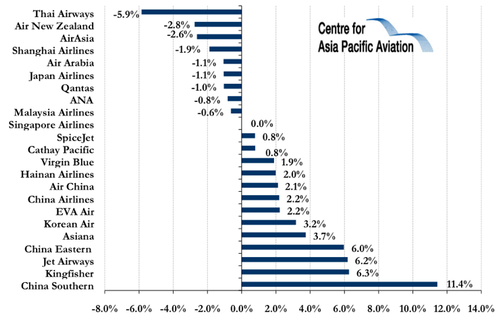 The worldwide economic slowdown has had an adverse impact on all businesses and in particular on the aviation sector.

In India, in addition to the economic slowdown, the aviation sector has been further impacted by, on the one hand, the excess capacity being operated by the carriers , the high crude oil prices that prevailed for a large part of the last financial year, coupled with the depressed demand for both Business and leisure travel which added to the woes of the industry .

Jet Airways, the country’s leading private carrier, has been implementing several measures to meet the challenges of the economic slowdown. It has undertaken a comprehensive cost restructuring exercise which included the withdrawal of operations on uneconomic routes, downsizing of capacity on some international routes so as to more closely align the capacity offered to the demand on the specific markets, restructuring and cutback in capacity on domestic routes, leasing out of excess capacity not required by the Company, putting a freeze on recruitment and on capital expenditure, pruning down executive perks and temporary reduction of management salaries, closing down of international crew bases and reduction of overhead expenses by closing down ticketing offices and resultant termination of leased premises, and as a last but necessary measure trimming down any excess workforce .

The restructuring of the Company’s operations and activities, both on domestic and international routes, will continue to be an on-going process with a view to reviving the economic health of the Company. The implications in terms of fleet and personnel requirements, both operational and supporting staff, will be established as the details are being drawn up as we go ahead.

Simultaneously, the Airline continues to explore all avenues of enhancing its business through alliances and code shares and through a review of its systems and processes to improve productivity and emerge from this period as a stronger more resilient organisation.