J D Power’s annual survey of airports in North America has become a rating standard over the years.

The 2022 survey reveals traveller satisfaction levels yo-yoing between 2021 and 2002; improving when there were hardly any passengers, and then crashing again when they returned.

Close analysis suggests that some aspects of the survey are beyond the control of the airport, while others are strangely overlooked.

The survey cannot differentiate between public and private airports because there are very few of the latter, but it does provide other useful data.

Now in its 17th year, the study is based on 26,529 completed surveys from US or Canadian residents who travelled through at least one US or Canadian airport, and it covers both departure and arrival experiences (including connecting airports) during the previous 30 days.

Travellers evaluated either a departing or arriving airport from their round-trip experience.

Interestingly, air traveller satisfaction with North American airports increased considerably during 2021, which was the second year of the COVID-19 pandemic, even reaching an all-time high in a year when passenger volumes were still just a fraction of the historical average.

In 2022, a year in which global passenger volume clawed its way back up to 90% of pre-pandemic levels and labour shortages caused a record number of flight cancellations, the high satisfaction scores have fallen back to previous levels.

Overall satisfaction was down 25 points (on a 1,000-point scale) in 2022 as passengers encountered fewer flights, more crowded terminals (what do they expect?), and sparse food and beverage offerings.

Moreover, nearly one quarter (24%) of travellers said they did not make any food or beverage purchases at the airport at all, because they were too expensive.

Some rating aspects fall beyond the airport’s remit

These aspects are what one would expect to be selected, but they do overlap with areas an airport might have limited or even zero control over – security being one of them.

It would perhaps be appropriate to include specific reference points such as: efficacy of signage; provision of flight information, be it by electronic or verbal means; and the standard of washroom facilities.

In the light of events during the last three years, another category might be how well prepared the airport is for a future pandemic, or even the return of the present one in another guise.

Some airports have incorporated health-related measures in new-build terminal facilities (Pittsburgh for example is notable for this), but it is within the bounds of possibility for any airport to introduce such measures within existing infrastructure.

The environment is strangely omitted

Perhaps the most striking omission is that of an environmental rating (as such matters are assumed to be of great significance to air travellers in this era, and certainly to influence ‘satisfaction’ levels).

Some passengers commented specifically on parking facilities, and J D Power noted big declines in traveller satisfaction regarding the parking lot, where a shortage of space has caused satisfaction with surface parking lots to decline 45 points from 2021's rating.

But if parking has become an issue to this extent, does that not suggest that satisfaction with public transport alternatives should be included specifically?

It is also to be wondered why there is no category for airports with less than 4.5 mppa. They do exist in the US and Canada.

In Europe and Asia such airports are usually kept going by low cost carriers and that can be the case in North America as well, although not to the same degree.

They are the airports with the least income and other financing to draw on for infrastructure investments.

Sometimes they do a remarkable job, sometimes not.

There follows below an overview of J D Power’s findings, on an airport by airport basis.

With a maximum of 1,000 attainable points, the highest score among the ‘mega’ airports (33 million or more passengers per year) was 800 points, which was earned by Minneapolis-St. Paul International Airport (MSP). 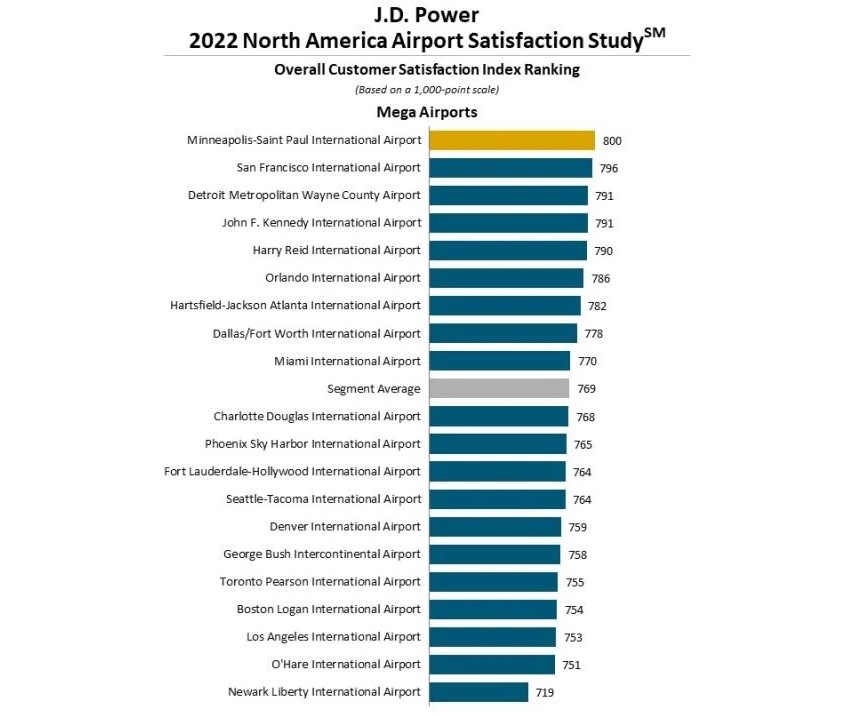 It is interesting that Detroit, one of America’s most run-down cities, should have scored so highly.

It could be a case that passenger expectations were low there – which can be the case – or equally, that the airport authority has worked hard to improve the airport, or both.

The New York & New Jersey Port Authority would have been pleased to see New York JFK in such a high position, given the criticism that the New York airports generally have come in for in recent years (but see Newark Airport, below).

All the main airports there have benefitted from public-private deals to build new terminal infrastructure.

The top three ‘large airports’ are in the south

In the ‘large’ airport category (10 million to 32.9 million passengers per year), the top scorer was Tampa International Airport (TPA), at 846 points.

The top three airports are in the southern half of the country, from east to west.

John Wayne was one of the first US airports to commit to environmental protection action – more than 30 years ago. 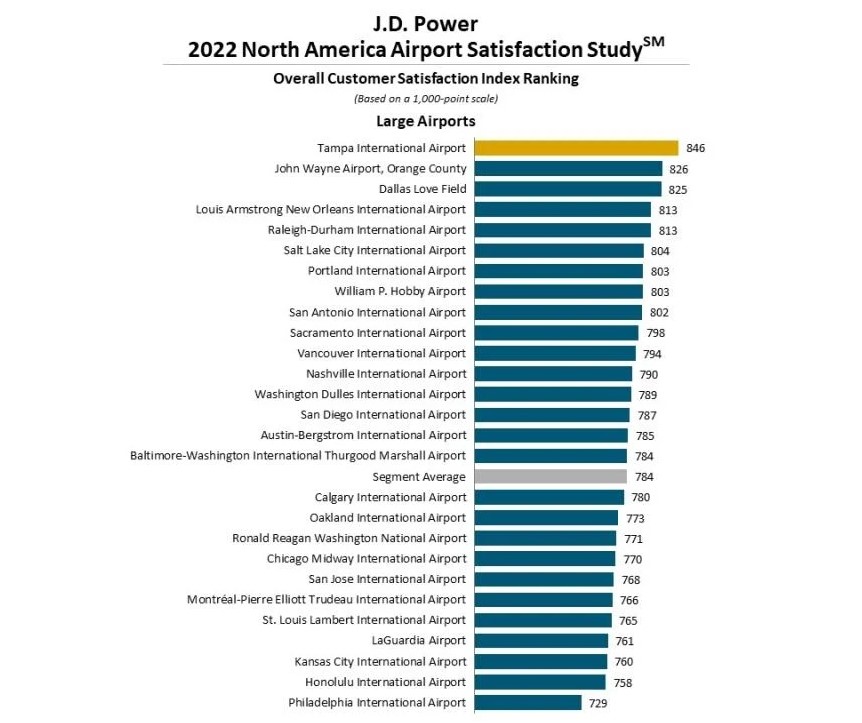 In the ‘medium’ airport category (4.5 million to 9.9 million passengers per year), the winner was Indianapolis International Airport (IND), with 842 points. 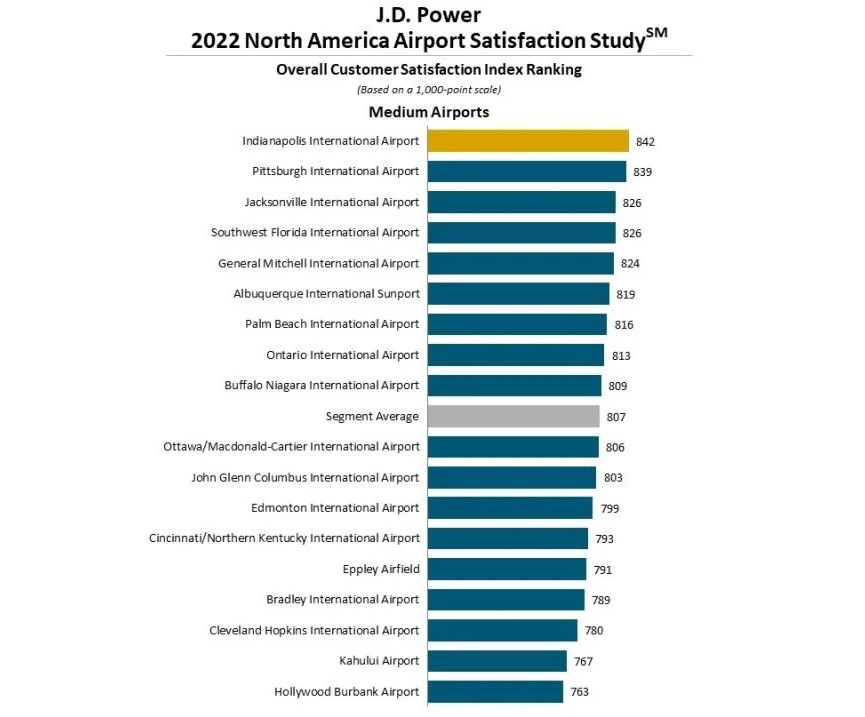 Returning to the mega airport category, the three worst-ranked airports were Newark Liberty, Chicago O’Hare and Los Angeles International, in that order (1,2,3). Those airports represent the three largest city conurbations in the US, although New York JFK was the highest ranked, as reported earlier.

Newark got the lowest score of any airport in any category.

In the large airport category the worst were: Philadelphia, Honolulu and Kansas City international airports (again, 1,2,3).

In the medium airport category: Hollywood Burbank, in the northern part of Los Angeles; Kahului Airport on the Hawaiian island of Maui; and Cleveland Hopkins International Airport in Ohio.

There is no discernible geographical pattern, but the Hawaii authorities would be dismayed to find two of their airports in the bottom three in two separate categories.

Large airports tended to score higher than those in the mega category, which might suggest some dis-economies of scale at the upper level.

In the mega category: Toronto Pearson, Canada’s largest, was fifth from bottom. That might have been a good result, taking into account the horrendous delays and cancellations there in the early part of 2022 especially, which is covered by the survey.

In the large category: the highest scoring Canadian airport was Vancouver, placed at 10 points above the category average. Calgary and Montreal were below that average.

In the medium category: Ottawa and Edmonton airports were placed just below the segment average.

No meaningful conclusion can be gained from those results.

Comparisons are not possible between private and public airports, but airport authorities come out on top

What the survey cannot say is how better or worse private sector-operated airports ranked compared to the public sector ones, because there are few of those in either country.

The only one of consequence in the US is the San Juan airport in Puerto Rico, and Puerto Rico is technically an unincorporated territory.

In Canada the John C Munro Hamilton International Airport near Toronto would have made for a useful comparison, but with less than one million passengers in 2019 – there was no category for it.

But there is some comparative ownership ranking data to be extracted.

A 2008 economic productivity study in the Journal of Urban Economics analysed a global set of 109 airports.

It found that the most productive airports were those with partial or total control by private investors, with the second-best set-up being airports operated by airport authorities.

After that came airports operated by city, county, or state/province governments – and bringing up the rear were airports operated by multi-purpose port authorities (of which there are several in the US, New York-New Jersey, Seattle-Tacoma and Massport [Boston] being three of the better-known ones).

Though both distributions are consistent with the journal article’s findings, the differences are small and likely not to be statistically significant.