US airline stocks suffered another day of falls on Wednesday (23-Jun-2010), after the Dow (+0.1%) ended trading relatively flat. The market fell earlier in the day on news of an unexpected drop in existing housing sales in May-2010 and the Federal Reserve stated “financial conditions have become less supportive of economic growth”.

Jazz Air Income Fund (+0.7%) was one of the few gainers of the day. Air Line Pilots Association (ALPA) stated during trading that it has reached a tentative agreement with Jazz Air. ALPA's executive council will review the tentative agreement on 24-Jun-2010. If approved, staff are likely to be advised of details of the contract next week and vote on the agreement in early Jul-2010. The union stated it is happy with the agreement. Pilots have been working without a contract since Jun-2009.

American Airlines (-2.5%) declined the day after the Federal Aviation Administration (FAA) stated it found structural cracks on the engine pylons of at least two American Airlines B767 aircraft during recent checks, with the FAA stating the cracks could have caused the engines to dislodge from the aircraft. FAA commented that it was "working with the carrier and the manufacturer to identify the source of the cracking and to develop remedies", adding: "We are also considering additional action, including requiring more frequent inspections of the engine pylon area." Boeing stated it may issue a change to the recommended inspection interval for the part. Meanwhile, the FAA has advised American Airlines to re-inspect 56 of its 73-B767 aircraft fleet. The carrier stated the inspections have not caused any major disruption to operations. 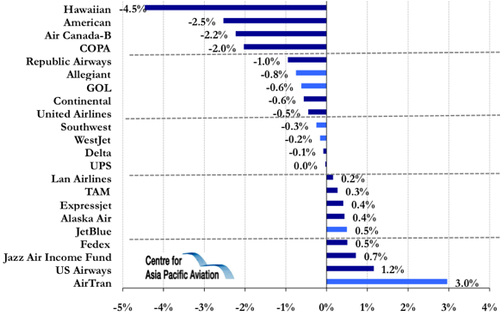