Canadian and Latin American carriers’ stocks were mixed on Monday (31-Mar-2010) as the US market remained closed for the Memorial Day public holiday. The majority of carriers made little movement for the session. Oil prices gained 0.9% to USD74.64 per barrel.

Canada’s TSX Index (+0.8%) gained after Statistics Canada reported the country’s GDP grew at an annualised rate of 6.1% during 1Q2010 - well ahead of the market expectation for 5.8% expansion. Higher commodity prices also pushed the market higher.

Jazz Air Income Fund (-0.2%) slipped after Jazz Air flight attendants, represented by the Canadian Flight Attendants Union, voted to support a strike mandate if contract negotiations with the carrier do not progress. The union stated the carrier’s flight attendants will strike from as early as 16-Jun-2010 if a new agreement is not reached.

Elsewhere, GOL (+0.2%) and TAM (+0.1%) made only minor gains for the day. GOL last week received approval to commence regular services between Brazil and Barbados, operated by its VARIG brand. The carrier plans to launch Sao Paulo-Bridgetown service on 26-Jun-2010. 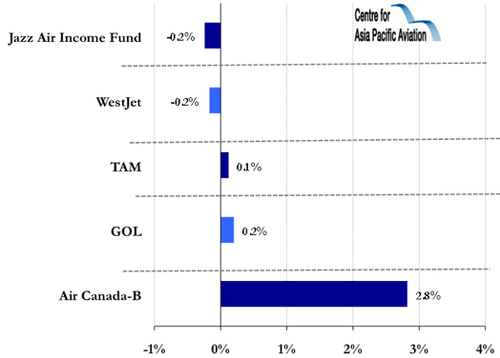