Shares in Japan Airlines and All Nippon Airways (ANA) fell 1.6% and 2.7%, respectively yesterday as the Nikkei 225 index slumped 2.4% on worries over the spread of swine flu and profit taking.

Japan confirmed another 118 cases of the virus on 18-May-09, taking the country’s total to 125. Officials in Japan have closed more than 2,000 schools and kindergartens in an attempt to slow the spread of the virus. This is sure to impact airline demand in the risk-averse Japanese travel markets in the coming weeks. Stay tuned to Asia Pacific Airline Daily for more updates.

Qantas was steady yesterday, while trans-Tasman rival, Air New Zealand, gained 0.9% as the airline announced a pay freeze affecting around 1,000 staff, as April traffic data revealed a plunge in yields.

Jet Airways, Kingfisher and SpiceJet surged by 18.1%, 12.8% and 11.2% yesterday as the re-election of the Singh administration brought renewed hope about economic reforms to drive the Indian economy forward. 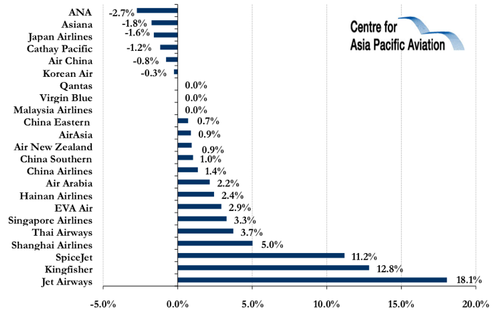