Asia Pacific aviation has entered a dark chapter, with billions in state cash and bank borrowings being directed to the support the beleaguered sector. Japan Airlines is to receive JPY100 billion (USD1 billion) in emergency loans from the state-backed Development Bank of Japan and a syndicate of Japan's three biggest banks. JAL’s shares eased 0.5% yesterday.

Air India’s application for a USD250 million capital infusion and USD557 million soft loan from the Indian Government could progress soon with the re-election of the government. Civil Aviation Minister, Praful Patel, suggested an IPO for Air India could be imminent, although it is difficult to see how the government could attract any buyers without simultaneously easing restrictions on foreign airline investment in local carriers. Shares in Jet Airways, SpiceJet and Kingfisher Airlines jumped 6.3%, 8.1% and 10% yesterday, respectively, at the prospect.

Thai Airways’ board recently approved plans to seek USD1 billion in loans for short to medium term funding. Thai plans to refinance USD435.5 million in maturing debt and seek USD580.9 million in loans in the short term. The carrier stated it has “four to five financial institutions” offering to assist it in improving its liquidity, and plans to establish a committee to enter negotiations with the banks. Separately, Thai has awarded BNP Paribas and Calyon a contract to arrange USD600 million in European ECA financing for six new A330 aircraft. Thai’s shares dropped 4.3% yesterday.

Air China and the Macau Government has launched a USD75 million rescue of Air Macau, after the SAR carrier’s net asset value plunged into negative territory. Air China’s shares slumped 6.9% yesterday. China Eastern and China Southern are also on the lookout for more government cash, despite significant top-ups in Dec-2008 and early 2009. Their shares closed 5.5% and 7.1% lower yesterday, respectively.

Hainan Airlines also disclosed it requires USD3.5 billion in fresh capital in 2009 to fund its huge fleet orders. This will most likely come from further provincial/municipal financial support and bank loans. Its shares were 0.7% lower yesterday. 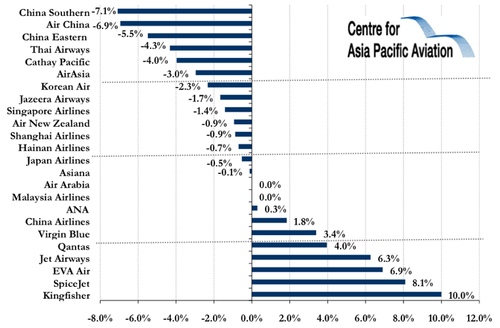