If adopted, the move would see the JAT-operated terminals at Haneda Airport, which has been a predominately domestic airport up to now, handle significantly more higher spending international passengers. See related report: Tokyo Haneda hub bombshell.

MAp (formerly known as Macquarie Airports and whose shares fell 0.4% yesterday) must be ruing its decision to sell its strategic stake in JAT.

In Europe, shares in Spanish construction company and owner of UK’s BAA, Ferrovial, gained 2.1% following the UK Department for Transport’s plan to introduce new measures to improve the resilience of its major airports.

BAA is expected to benefit from the decision, as it will allow the airport operator to raise funds more easily. While the plan will mean an increase in the cost of financing development projects, the Special Administration regime will be replaced, ensuring airports remain open even if their owners were to file for bankruptcy.

Shares in Fraport, operator of Frankfurt Airport, fell 1.3% following the release of its Sep-2009 traffic results. Passenger numbers across the operator’s portfolio of airports fell 1.7% year-on-year, led by a 4.7% decline at Frankfurt Airport. Both passenger and cargo traffic declines at Germany’s largest airport widened in Sep-2009: 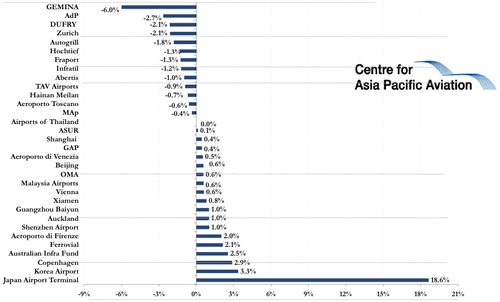