JAL’s shares surge as credit is boosted; Asiana’s debts to be frozen

Japan Airlines’ shares started 2010 with a 31% surge, following news that state-owned Development Bank of Japan would double the airline’s credit line to USD2.2 billion and amid speculation that the company may shortly close a new agreement with Delta Air Lines (this was subsequently denied by JAL and American Airlines).

The carrier’s shares slumped 30.9% last week to end the year at a record low, following concerns the carrier was facing financial difficulties and could be facing bankruptcy.

JAL’s share price rebound helped the Nikkei Stock Average close at a 15-month closing high on Monday, also aided by the stronger US Dollar, which buoyed Japanese exporters’ stocks. Shares in Skymark Airlines and ANA were up, by 5.6% and 5.2% respectively.

Asiana Airlines’ shares gained 4.4% yesterday, on news that the Korea Development Bank (KDB) and other financial firms are likely to freeze debts of Asiana Airlines and Korea Kumho Petrochemical Co  (both Kumho Asiana Group units) for one year, to enable the restructure of the units.

The financial firms also plan to appoint financial auditors to oversee the money management and restructuring of the two units, while taking equity and other assets held by the firms as collateral when providing fresh loans. Asiana Airlines reportedly holds an estimated USD3.3 billion in debt. 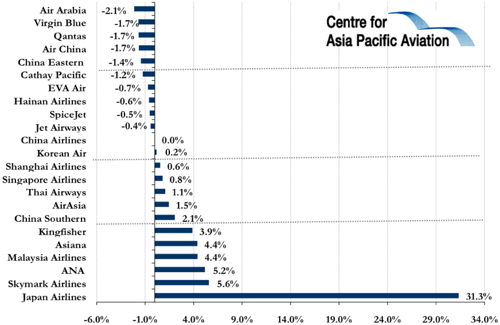