JAL’s share price slumped 45% to a record low and reached the trading limit on 12-Jan-2010, as investors rushed to sell JAL shares on speculation it would file for the country’s sixth largest bankruptcy. Despite JAL's falls, Japan’s Nikkei 225 stock average rose to a new 15-month yesterday.

In other JAL news, the carrier reported a 12.0% slump in domestic and a 5.8% reduction in international passengers in Dec-2009, for combined 3.2 million, while load factors slipped 5.5 ppts domestically to 52.0%. International load factor results were more positive, up 8.7 ppts to 70.4%. 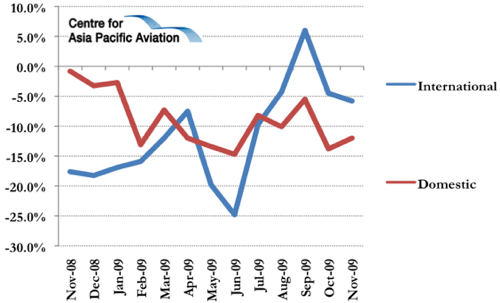 Also in North Asia, Cathay Pacific (shares up 0.6% yesterday) ended 2009 on a positive note, with stronger passenger demand leading to an improved load factor and yield at the highest level of the year.

Cathay’s General Manager Revenue Management, Tom Owen, commented that the “encouraging result” was driven by extracting “better quality demand” in its Economy cabins, and a “continuation of a gradual rise in volume from premium passengers compared to the lows seen earlier in the year”.

Mr Owen conceded that the core problem for 2009 was the “precipitous drop in yields, due to the premium demand collapse and intense pricing pressures in the Economy cabins”.

In the freight segment, cargo volumes increased notably in Dec-2009 (up 25.0%), for a “very strong” month, with the carrier commenting that the “backlog of freight in the key Hong Kong and Shanghai markets helping to stretch out the peak”. The cargo load factor in the month was also the highest of the year, in part due to the capacity reduction, which helped to push up yield. See related report: Christmas delivers for Hactl and AAT; notable pick up in Hong Kong cargo in Nov-2009 and Dec-2009 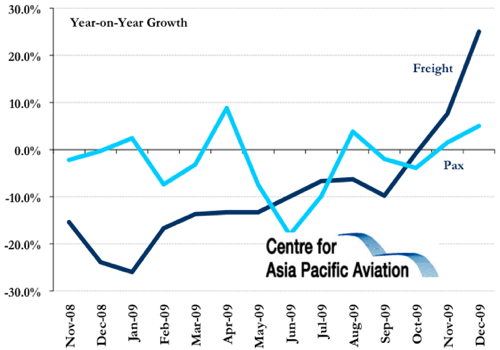 Jet Airways “confident” it is on growth curve; expects further pax and yield growth in 2010

Jet Airways’ shares gained 1.2% yesterday, as the carrier’s CEO, Nikos Kardassis, upon the release of the carrier’s Dec-2009 traffic highlights, stated the carrier is “confident it is on a growth curve”. 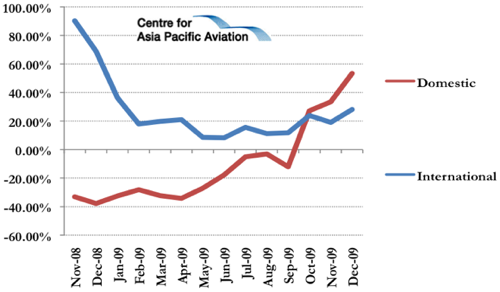 He continued, “our continually improving results in November and December 2009 serve to further re-confirm this”, adding that as business and leisure travel "continues to improve in tandem with the global economic scenario, we expect a further growth in network-wide passenger numbers and yields”.

Full details of these and 30 other reports are available in today's edition of Asia Pacific Airlines Daily. 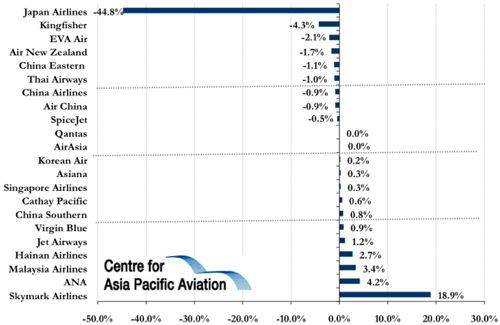