JAL's shares slumped almost 18% during intra-day trading yesterday, to a historic low (since post Japan Air System trading began in Oct-2002) of JPY141 per share, before ending the day down 15.8% at JPY144.

The benchmark Nikkei stock average advanced 1.7%, after being closed between Monday and Wednesday due to public holidays.

Philippine Airlines stated it expects “dark clouds” ahead, with the carrier expecting continued revenue reduction in 2QFY2009, similar to the 12% decline experienced in 1QFY2009.

The carrier, which is suffering from continuing yield contractions and weak load factors, added that it is also “facing the spectre of extremely weak passenger traffic and cargo demand amid the protracted world economic meltdown". The carrier stated it has seen “no sign of an immediate economic recovery”.

Jet Airways shares were down 0.4% yesterday, on the same day the carrier confirmed that its shareholders approved its plans to raise up to USD400 million by diluting equity through a private placement of shares, or through the sale of global depository receipts (GDRs), American depository receipts (ADRs) or foreign currency convertible bonds (FCCBs). The share sale will result in the dilution of shareholdings of the promoters who hold 80% in the company.

OAG stated capacity on intra-Asia scheduled services was up 8% in Sep-2009, although capacity to/from Asia was down 2%.

Capacity within and to/from the Middle East were both up by double digits, rising 18% and 13%, respectively. OAG added that global capacity rose for the second consecutive month in Sep-2009 (capacity up 1.4%, despite a 0.6% frequency reduction). 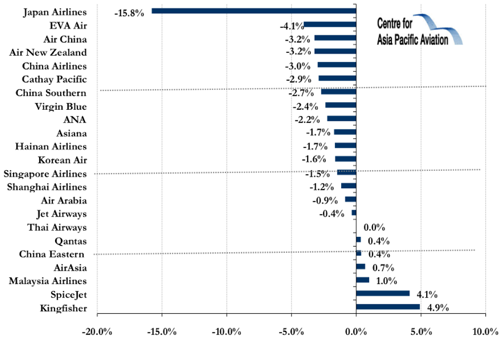