Japan Airlines’ shares slumped 28.6% on Monday, to close at another new all-time low of just JPY5 on the expected eve of a bankruptcy filing for the struggling carrier.

The carrier lost more than 90% of its value over the last week and 93% so far this month, and now has a market capitalisation of approximately JPY13.7 billion (USD150 million), or equivalent to the price of one B787.

Shares of China Eastern Airlines gained 1.1% in Hong Kong trading and 5.1% in Shanghai (the most since 05-Nov-2009) after the airline stated it expects to swing to profitability in 2009. In a filing to the Hong Kong Stock Exchange, China Eastern stated it expects net profit for the year of USD2.0 billion, due to favourable fuel hedging from lower fuel costs and a recovery in the local aviation industry.

Air China Ltd meanwhile jumped 4.6% in Shanghai trading to CNY11.09, the highest close since Jun-2008, but was down 0.3% in Hong Kong trading, as the carrier announced it would receive CNY1.5 billion (USD219.6 million) in grants from the Ministry of Finance, which will support its proposed acquisition of the stake it did not already own in Air China Cargo Co Ltd (from Beijing Airport).

Also in North Asia, Asiana Airlines’ shares remained unchanged yesterday, despite reports that Kumho Asiana Group’s creditors plan to agree to reschedule the debts of Asiana Airlines (and Korea Kumho Petrochemica) next week, as part of restructuring efforts for the struggling company. 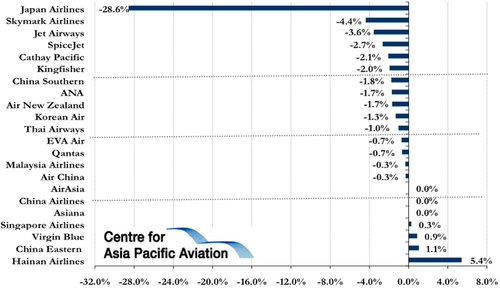