JAL plans to deploy its B787 on a new Tokyo Narita-Boston route from 22-Apr-2012, as well as on existing routes prior to that. JAL's low density option follows a decision from launch customer and operator All Nippon Airways (ANA) to configure its long-haul international B787 fleet with only 158 seats, or 28 fewer seats than JAL.

Both ANA And JAL will have a lower configuration density than Boeing’s "typical" three-class configuration plan of 242 seats, as stipulated in a Mar-2011 Airport Compatibility Brochure for the B787. LOT plans to outfit its B787 with 252 seats, and United 219 seats. 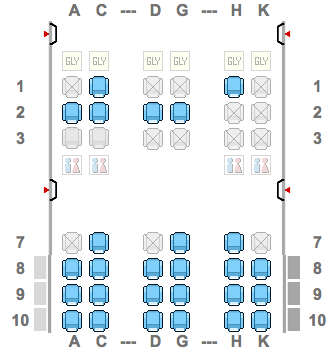 The economy cabin starts after business class and goes until doors 3. In the zone there is one row of two seats on either side with no centre seats, and then seven row of 2-4-2 seats. After doors 3 there is again one row with no centre seats and then nine rows of 2-4-2 seats. There will be galley space around doors 3. Finally there is one row of 2-4-2 seats aft of doors 4, an uncommon layout but one that could maximise seating by decreasing galley space. The extra row is also offers JAL additional exit row seats with enhanced seat pitch the carrier could sell or reserve for elite frequent flyers. Lavatory location and numbers on the aircraft is not clear. Although JAL indicates there will be lavatories aft of rows 3 and 29, the numbers indicated (four and eight respectively) are too high. 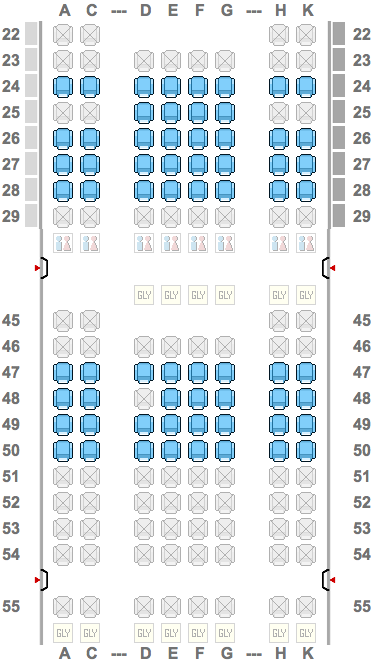 For IFE, JAL will install the MAGIC-V system in economy class. No details on the business class IFE system have been provided, although it will likely be the same version.

The Tokyo Narita-Boston route will commence on 22-Apr-2011 with oneworld member and joint business agreement partner American Airlines. The initial four-weekly flight will increase to a daily service on 01-Jun-2011. JAL president Masaru Onishi said the Tokyo-Boston route would be possible “by making full use of the efficiencies of the revolutionary 787 as well as capitalizing on our closer relationship with American Airlines”. American Airlines will codeshare on the service and JAL will work with major Boston carrier and American Airlines partner jetBlue for onward connectivity, suggesting partnerships are just as important as the B787’s operating costs.

Read more: B787 routes so far do not push operating envelope

JAL has 35 B787s on order, all -8 variants. The aircraft fills a niche between the carrier's B767-300 and B777-200 fleets, effectively giving JAL a B767-sized aircraft with a B777-200's range. The B787's length is approximately 57 metres, 2m longer than the B767-300's length of approximately 55 metres. The B767-300 seats 237 passengers in a two-class configuration. The significantly higher density of the B767-300 despite the aircraft being shorter and narrower than the B787 can be attributed to its deployment on short- and medium-haul routes where seat pitch does not need to be as great as on long-haul flights. The B787 is wider and can accommodate one or two extra economy seats per row than the B767-300. JAL's B777-200ER – seven metres longer than the B767-300 and also wider than the B767 and B787 – typically seats 268 passengers in a two-class configuration, including nine-abreast in economy, a wider layout that adds approximately 22 seats than if economy was in a B787's 2-4-2 configuration.

Also in the Japanese market, ANA has configured its long-haul international B787s with 158 seats across two cabins. The exceptionally low-density configuration can be attributed to 46 business seats (fully flat Sicma Skylounge business class seats) configured in spacious alternating rows of 1-2-1 and 1-1-1 (compared to a typical 2-2-2 or even 1-2-1 throughout configuration) and the 112 seats in economy (33 to 34 inch seat pitch) arranged in a standard eight-abreast 2-4-2 configuration instead of the nine-abreast option available to airlines and which Boeing uses as a "typical" configuration.

ANA’s initial regional and domestic B787s will be configured with 264 seats (12 Sicma Majesty business class seats and 252 economy), the densest B787 configuration confirmed to date, which will be reduced to a 222-seat configuration for regional services.

(Above and below): Boeing