Qantas gained 4.8% yesterday as Asia Pacific stock markets surged after Wall Street's strong lead. The carrier took delivery of its fourth A380 yesterday, enabling it to increase A380 services to London and Los Angeles next month.

Qantas, which is scheduled to receive two additional A380s in 2009, and three in 2010, is currently in talks with Airbus regarding potential deferrals of post-2009 A380 deliveries.

Japan Airlines' shares also gained yesterday, rising 2.4%. The carrier is reportedly considering reducing its workforce by approximately 5,000 employees, equating to approximately 10% of its total workforce, in the three years to Mar-2012, through attrition and other measures, with the move to reportedly reduce costs by more than USD1.6 billion.

China Airlines' (CAL) shares also gained yesterday (+0.3%), with the carrier’s stock climbing 6.6% so far in 2009. CAL Chairman, Philip Wei, in an interview with Bloomberg, stated the carrier was profitable in 2Q2009, after six consecutive quarters of losses, as hedging gains offset an operating loss.

CAL's shares will be suspended from trading between 27-Aug-09 and 14-Sep-09, as it is buying back and cancelling approximately 31% of its stock, in a move designed to increase the carrier’s net value per share. The company may reportedly issue new shares after selling USD305 million of bonds in a private placement.

However, Citigroup marginally increased its target price for the stock, stating, “we view that Jet’s management is taking the correct measures of: a) leasing of surplus aircraft, non-renewal of expired leases, b) rationalisation of network, and c) cutting manpower and other overhead costs. These, coupled with lower oil costs (compared to one year ago), imply Jet’s operating profitability will improve significantly over FY2010-FY2011”. The brokerage stated it expects the carrier’s operating cash losses to continue in FY2010, resulting in a need for the carrier to refinance its debt repayments. 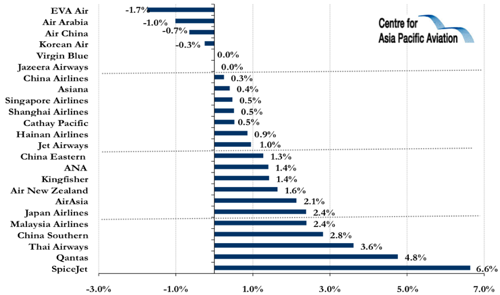