Even in the heyday of the Soviet Union and the Ottoman Empire few could have anticipated that Moscow or Istanbul would head the table of the busiest transport stations in Europe, meaning, in this case – airports.

But that is the case in the first half of 2021 according to statistics recently released by ACI Europe, with those two cities providing the top five airports between them, and with St Petersburg and Antalya joining them to make it seven out of 10 for Turkey and Russia.

As CAPA has often emphasised these last few months, it is the continuation of domestic services in countries, with a big demand for them, which has led to this situation.

Or at least, mainly that domestic demand, as international vacation travel and transit have also played their part too.

London or Amsterdam – 'wherefore art thou'? ACI Europe has just released a list of the busiest airports in Europe (passenger numbers) for 1H2021 (Jan to Jul).

Separating them are the two main Moscow airports, Sheremetyevo and Domodedovo with 15 million and 11.8 million passengers respectively.

Paris Charles de Gaulle (6th) and Frankfurt (8th) airports also make the cut, having been the second and fourth busiest respectively in 2019, while Madrid, which was the fifth busiest in 2019, makes ninth place in 1H2021.

London Heathrow falls out of the Top 10

The most noticeable absence is that of London Heathrow Airport, which was Europe’s busiest in 2019. 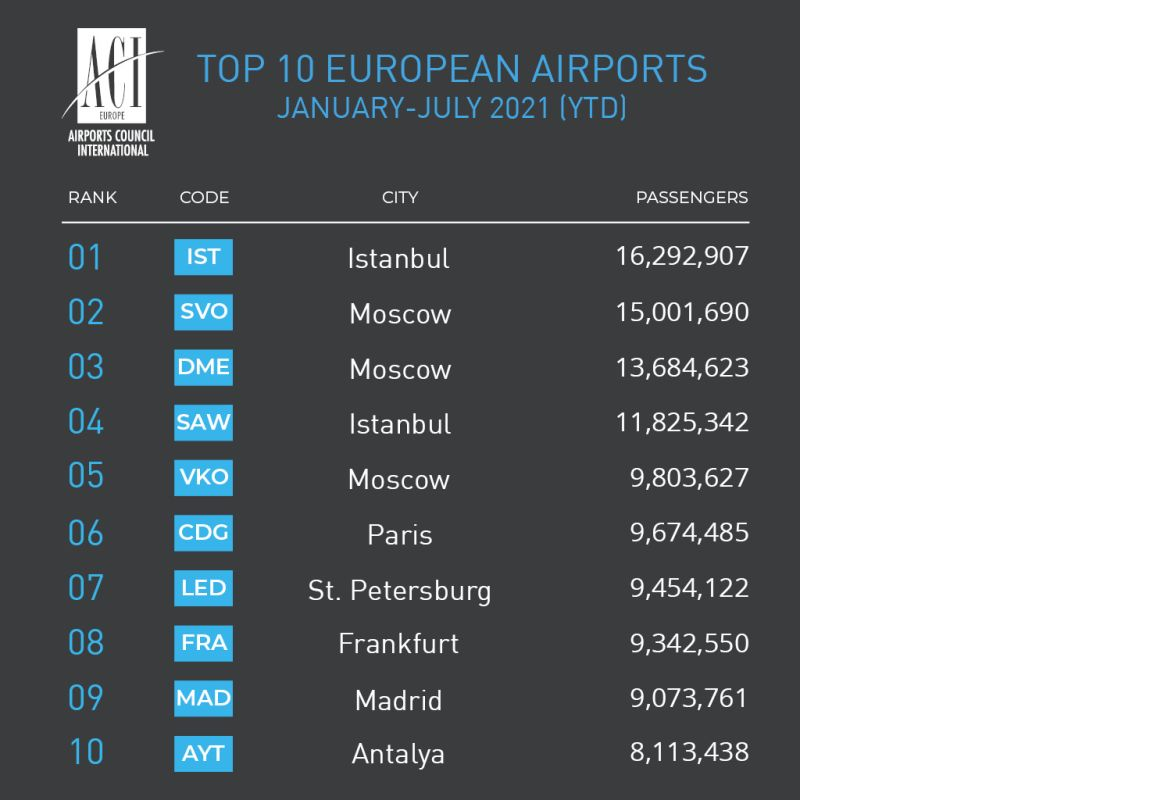 The unfolding of the pandemic ensured that the table began to change in nature during 2020 as different regimes reacted in different ways in terms of the regulation of travel; this was allied to localised ‘lockdowns’ most of which, thankfully, no longer apply in most of Europe, although they are still in place in some other parts of the world.

A distinct pattern had begun to emerge from Mar-2020 onwards, when the first lockdowns were instigated, so that those airports usually at the top of the table had already racked up a quarter of the year’s passengers before the restrictions began to take effect.

As the year progressed, though, airports such as de Gaulle and Heathrow were disproportionately affected.

In the full year 2020 Paris Charles de Gaulle’s passenger volume fell by 70.8%, and that of Heathrow by 72.4%. The biggest loss incurred by any airport in the 2020 ‘Top 10’ was that of Madrid, partly because of an intense, protracted lockdown there, partly because of the loss of tourist traffic in the main season, and partly because of a reduction of Latin American traffic – that region was badly affected by the pandemic, and Madrid was the main European gateway for it.

One airport that remained in the top 10 in 2020 but has dropped out so far in 2021 is Barcelona, where there is the intention that it should become an alternative hub for Spain as a whole, although that proposal has met with local resistance.

Apart from Istanbul, other airports in the east of the continent were beginning to move up the rankings in 2020, and notably the three Moscow airports, Sheremetyevo (fifth), Domodedovo (eighth) and Vnukovo (10th).

The former two are well known internationally but not so much Vnukovo, which has become a leading low cost airport for the Russian capital, even though there is a ‘designated’ Moscow airport for such activity (namely Zhukovsky).

2021 started with a clean sheet in the sense that there was no ‘false dawn’ of two to three months of normal capacity and traffic followed by an Alpine ski jump-style descent as there was in 2020.

The chart below, which measures European seat capacity over the years 2018-2022*, is indicative of the contrast between the two years. 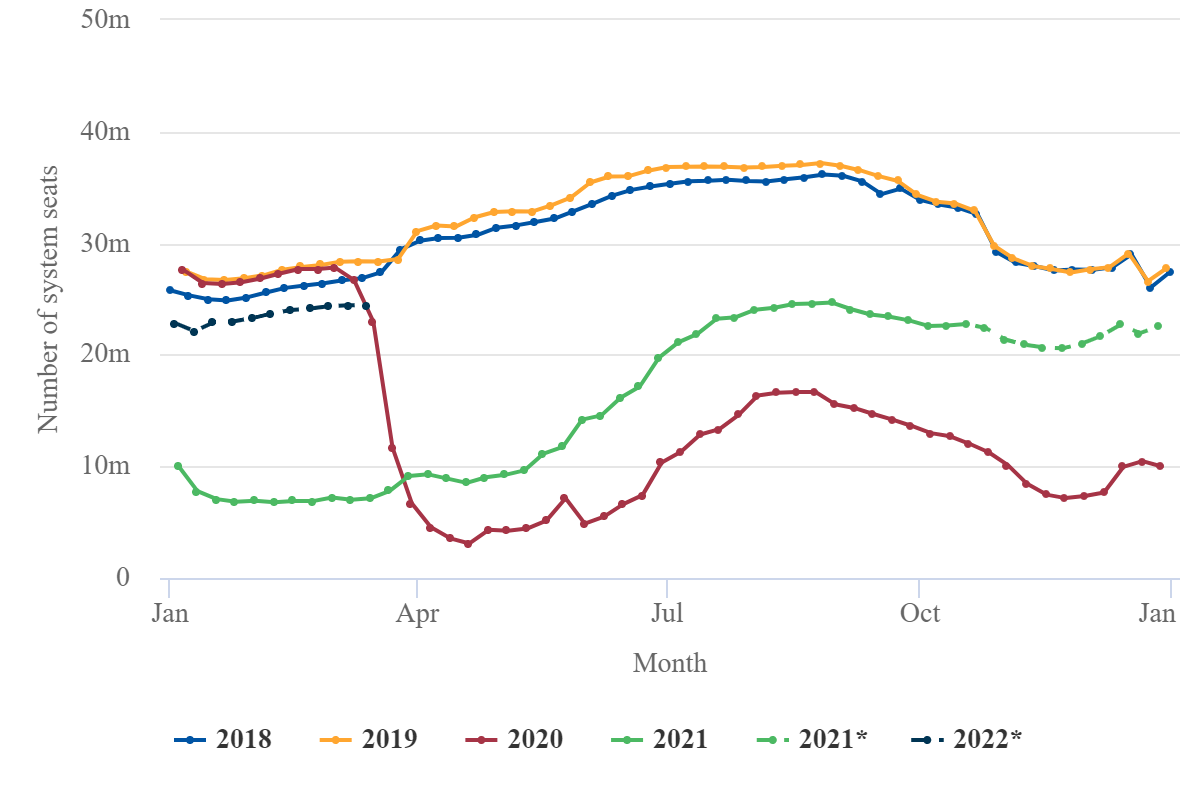 It is evident that capacity, which was matching that of 2019 precisely, fell off a cliff in Mar-2020, only beginning to rise significantly again in July and then tailing off again towards the end of the year, to finish up where it had been in April (2020).

In contrast, 2021 began with overall capacity at the Apr-2020 level, remained constant for three months and since then has risen steadily in a way which suggests that – allowing for unanticipated developments – it will continue to hold fairly steady until the end of the year.

The 2022 projection (wavy dark line) is just that, and based on previous years. There is no confirmation as yet that the year 2022 will start off with capacity close to 2019 levels.

While there is a significant difference between domestic capacity across Europe in 2020 and 2021, and considerably more so than there is in international capacity, that difference is far greater in the case of Turkey and Russia respectively, two countries whose comparatively strong performance owes much to their domestic markets and little to the international ones.

Turning firstly to Turkey, international capacity remained stagnant throughout 2020 but recovered in 2021, so that in the week commencing 04-Oct it is at 80% of 2019 levels.

But it is in the domestic domain where the firmest stand was made against the pandemic.

As the chart below shows, domestic capacity went down to zero on several occasions in Apr-2020 and May-2020, but then rallied strongly from the end of May onwards. That is primarily why Istanbul Airport was able to overtake airports such as Paris CDG and London Heathrow in that year, along (of course) with the severe diminution of both domestic and international capacity at those two airports. 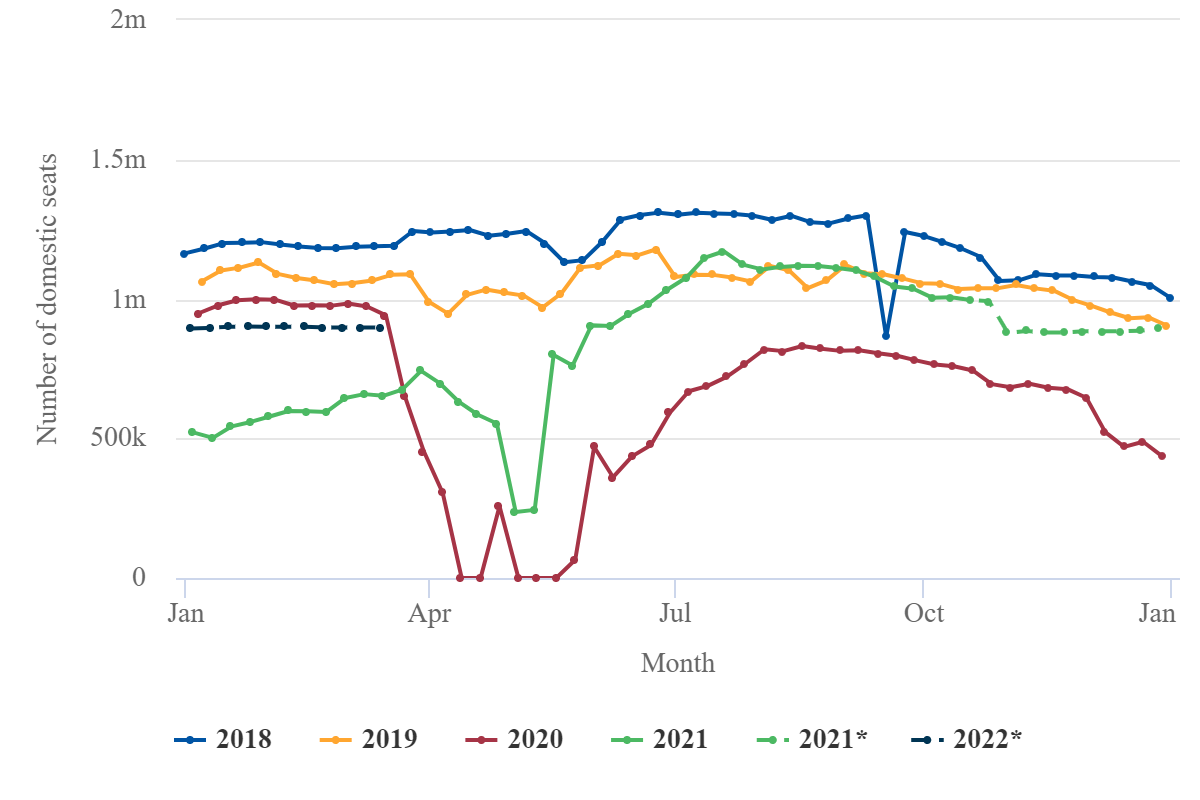 In 2021, apart from a short dip in capacity for six weeks between early Apr-2021 and mid May-2021, that domestic capacity has risen to the point where it crossed the 2019 line at the beginning of July and has kept pace with it ever since. And that offers some explanation as to why not only the two Istanbul airports occupy positions #1 and #4 in the table, but also why they have been joined in the top 10 by the coastal resort city airport of Antalya.

What’s more, the chart line into the second half of 2021 suggests that these airports will retain their status through to the end of the year and even beyond.

On the other hand, it is overly simplistic to attribute these events entirely to Turkey’s domestic scene.

The international capacity line is projected to come close to that of 2019 in Nov-2021 as a relatively lax entrance regime for foreign tourists and the consolidation of the relatively new Istanbul Airport as a European and Intercontinental (meaning the Middle East) transit point come into play. In the week commencing 04-Oct-2021 Turkey as a whole is offering 420,000 international departing seats to Western Europe and 356,000 to Eastern Europe.

Istanbul Airport alone is offering a combined 237,000 seats to Europe as a whole and 96,000 to the Middle East, filling a transit ‘gap’ where the Middle East ‘Big 3’ airlines (Qatar, Etihad and Emirates) had reduced their services (although they are reinstigating more of them now).

Looking at Russia, the story is similar.

Overall capacity fell sharply in Russia from Mar-2020, recovering moderately to the end of the year 2020. In 2021 that recovery has been much stronger, and capacity has just come within 10% of 2019 levels.

But that has not happened yet with international capacity (still -32%); rather, the gains have once again been in the domestic segment where, astonishingly, capacity has been running consistently in advance of 2019 levels since the week commencing 05-Apr-2021 and continues to do so. The largest ‘gap’ opened up so far was of 23% in the week commencing 21-Jun-2021. 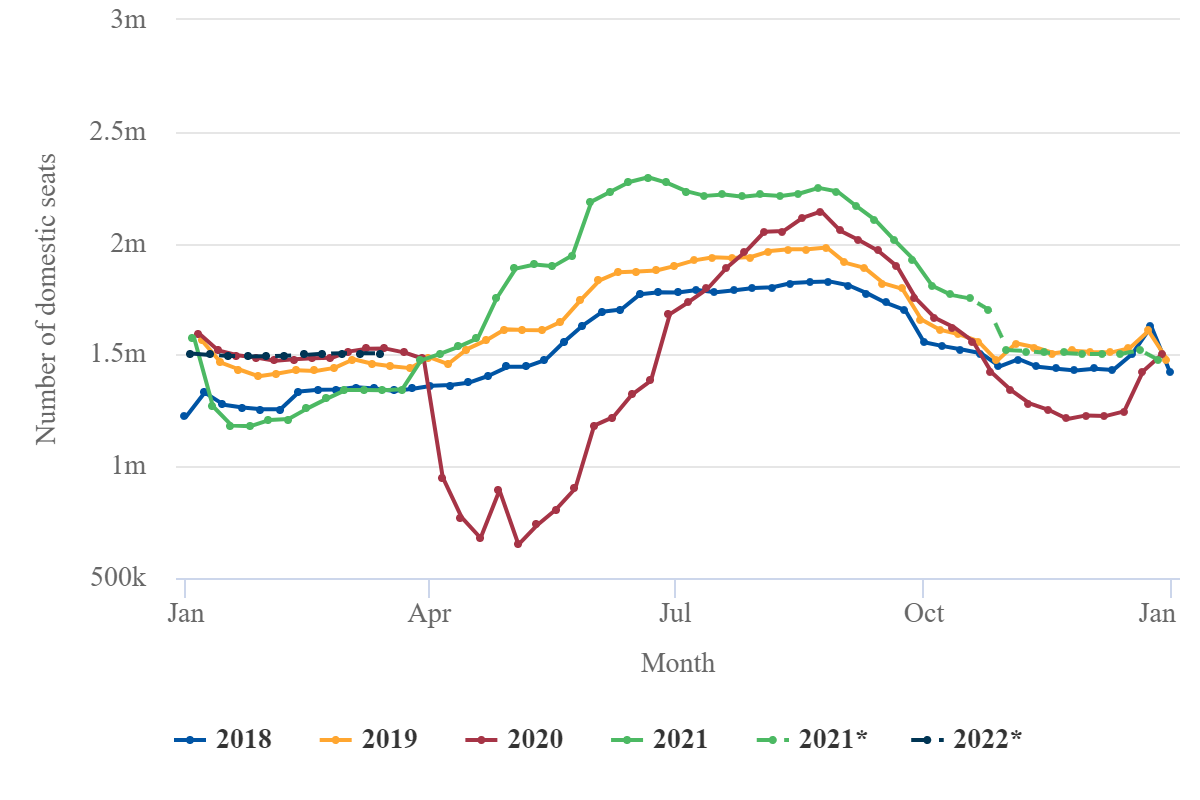 That is why not only three of the four Moscow airports are in the Top 10 table but also St Petersburg Pulkovo Airport.

Between them, Turkey and Russia account for seven of the Top 10 places, and while Paris, Frankfurt, Madrid, also London Heathrow and Amsterdam airports will begin to regain capacity and traffic more quickly now as restrictions are eased, these eastern airports have their moment in the sun. With the added benefit, certainly in the case of Turkey, of attracting international transit passengers who might otherwise have used other airports.

CAPA has provided regular weekly updates on seat capacity in Europe and compared to other regions, as in the following report from 28-Sep-2021, for example.