Israel’s aviation market is set to open up to a much higher level of competition following the signing of an Israel-EU open skies agreement. The eighth and final round of negotiations between Israel and the EU took place last week, leading to an agreement which will gradually liberalise over the next five years air links between Israel and the 27 nations currently within the EU.

Israel’s three main carriers have voiced concerns at the potential effects the new open skies agreement could have, with El Al in particular vulnerable to the prospects of increased competition. A rise in low-cost carrier competition could also follow relaxed aviation regulations, further pressuring the Israeli carriers. 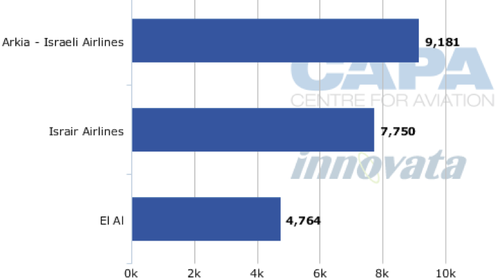 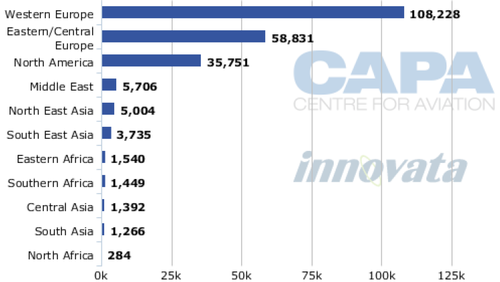 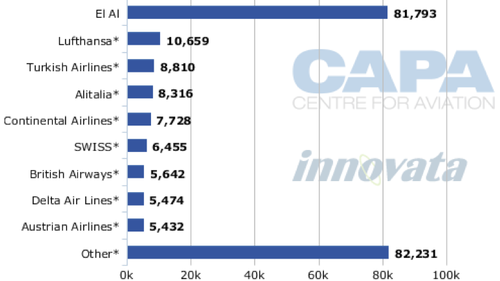 The small size of Israel means a significant majority of airline capacity in the country is from international services. Just 9% of capacity in the Israeli market is domestic. Eilat is the only domestic destination and is served by all three carriers from Ben Gurion Airport and/or Tel Aviv’s second airport, Sde Hov.

All international services in Israel depart from Tel Aviv Ben Gurion. Western Europe is Israel’s largest region overall for international passengers, with Germany the leading origin and destination within this region for passengers to Israel. Not surprisingly, El Al, Arkia and Israir all operate various routes to Germany including to Berlin, Frankfurt and Munich. The largest foreign international carrier to Israel is also Lufthansa, which offers services to Tel Aviv from Frankfurt and Munich.

Israel’s largest market by country remains the US, with over 15,000 seats per week in each direction. New York JFK is El Al’s largest route by seats offered, with 8739 seats currently on offer each week.

The establishment of an open skies agreement between Israel and the EU is bound to have significant effects on the state of Israel’s aviation industry, particularly on national carrier El Al. From allowing increased competition on international routes, El Al will be forced to examine its operation and step up improvements to its network, fleet and product. The airline has some time to make these change as current restrictions in the Israel-EU market will gradually be removed until open skies is fully implemented in 2017.

The airline has yet to announce plans for its long-haul fleet, in particular the replacement of its 747-400s. As El Al has voiced its aim to reduce the number of aircraft types in its fleet, it is possible the airline could elect to expand its 777 fleet when the time comes to retire its 747s from service.

In addition to El Al’s ageing fleet, its network is not conducive to competing with other more efficient carriers such as Lufthansa. The inconsistency of El Al’s schedule is a challenge, with most services having varying departure times based on the day. Efficiency is also compromised as El Al continues to only operate six days per week due to observing the Jewish days of rest from sunset on Fridays to sunset on Saturdays. The aircraft type used on each route also varies depending on the day, which leads to an inconsistent product, particularly for business passengers.

As strong European network carriers increase their services and frequencies into Israel, they are more likely to become preferred airlines for most passengers travelling to and from Israel. This is the case not only for short and medium haul routes to Europe but also long-haul routes to the Americas given the connections offered by large European network carriers such as Lufthansa, Swiss and Air France.

El Al will continue to have a loyal following from the Orthodox Jewish population in Israel and abroad due to the carrier’s strict observance of Jewish religion and customs, such as the Jewish days of rest. But this segment of the market is relatively small and El Al competes in other important segments of the market against foreign carriers, in particular European carriers. As European carriers expand their Tel Aviv operations, it could become harder for El Al to compete for certain types of passengers, particularly business passengers.

As an important part of Israel’s identity and presence around the world, El Al represents the values of its nation’s people rather than being entirely focused on commercial aspects of the airline business. For this reason, it is unlikely the carrier will begin operating daily frequencies across its network. El Al, however, could implement a series of initiatives that could potentially improve its competiveness against European carriers while continuing its practice of operating six days per week.

Even if it is not possible to increase frequencies on key routes to daily due to religious reasons, the adjusting of El Al’s schedules to more consistent timings could help it attract more business passengers. Designating particular aircraft types to certain routes could also improve El Al’s positioning.

El Al, Arkia and Israir met with Israel’s Civil Aviation Authority earlier this month to discuss the country’s proposed open skies agreement with the EU and to seek permission to cooperate with each other. If approved, the airlines plan to cooperate on international routes in response to expected growth in foreign competition on international services.

The Israeli Government agreed to some respite for its three carriers, previously stating it would increase the proportion of security costs it covers for the airlines from 65% in 2011 to 70% in 2012, to 75% once the open skies agreement is signed and finally to 80% once the agreement is implemented. With security costs being a considerable portion of Israeli airline expenses, this will assist the carriers as they seek to compete with increased foreign competition.

An Israel-EU open skies agreement could lead to the growth of Israel’s low-cost carrier market from its low current base. Israel does not have any budget competition in its small domestic market but internationally 7.3% of capacity is currently provided by LCCs, led by airberlin and easyJet.

There are currently five low-cost carriers offering over 1000 seats per week to Israel. There are another seven LCCs operating into Israel with less than 1000 seats per week. With a liberalised aviation market, this could change, and a large amount of new LCC capacity could be placed on routes from Europe. 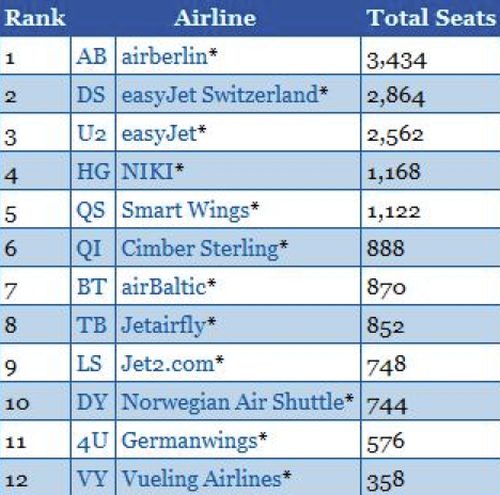 LCCs, however, could still be reluctant to increase operations into Israel due to the significant security procedures and related expenses in place at Ben Gurion Airport.

LCCs will not be the only airlines interested in new opportunities once the open skies agreement comes into effect. Full service airlines which can offer connections from Israel across the world via their key European hubs are likely to consider strengthening their existing services to Tel Aviv or launching new links into Israel. Under the current bilateral agreements, some countries are restricted in opening new routes or increasing frequencies to Israel. For example, Austrian Airlines is one carrier which recently attempted to increase its links to Israel but was denied further traffic rights on the Vienna-Tel Aviv route. The new open skies agreement replaces all existing bilateral agreements currently restricting air travel between Israel and EU members.

The signing of an Israel-EU open skies agreement has the potential to dramatically shake up Israeli aviation. El Al, Arkia and Israir are all vulnerable as competition from European carriers intensifies, particularly El Al which operates an ageing fleet across an inconsistent and ineffective network.

But despite the potential negative effects open skies may have on its national carriers, Israel stands to benefit through increased tourism and economic growth. The potential reduction of prices on services between Israel and the EU as more capacity is added to the market will also make air travel more accessible to those who wish to travel between Israel and Europe. If El Al in particular ends up suffering from the increased competition, it is possible the Israeli Government would be willing to increase its financial support of the flag carrier, taking into account the benefits the rest of the nation stands to see from the open skies agreement.