Is Ryanair growing too fast?

Ryanair has notched up a new monthly traffic record, handling 6.7 million passengers in July, up an impressive 19% year-on-year. Load factor was steady year-on-year at an equally impressive 89%. However, the carrier does not disclose monthly yield data, so understanding the profitability – or otherwise – of the headline traffic numbers is difficult.

It is clear that Ryanair is discounting massively to fill up its rapidly growing fleet and network. In the past fortnight alone, the LCC for example has released two separate EUR1 fare sales covering 1 million seats for travel in the shoulder period from September through to November.

Ryanair’s recent load factor performance has been fairly solid, with only three decreases in the past 12 months, reversing the previous year’s fairly soft performance. In its latest commentary, Ryanair stated its continued growth “underlines that passengers during this recession are increasingly switching from high fare, fuel surcharging flag carriers, such as Air France, BA, Lufthansa and Aer Lingus who are losing passengers, to Ryanair’s lowest fares and no fuel surcharge guarantee”. 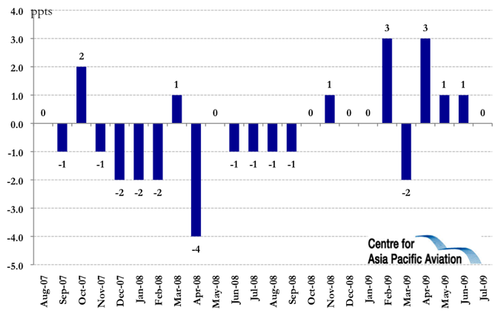 In the first quarter ended 30-Jun-2009, Ryanair’s yield slumped 13%, as the carrier grew traffic by 11%. The carrier stated it remained “cautious” for the remainder of the fiscal year, conceding that traffic growth “is strong, but at much weaker yields due to the recession and the impact of tourist tax in Ireland and the UK”.

Like British Airways, which is having difficultly forecasting its forward revenues, Ryanair stated it has “limited visibility” beyond the next two months, but expect passengers to be “very price sensitive for the rest of the year”.

The carrier stated it expects yields in the current quarter (ending 30-Sep-2009) will be “significantly lower than last year, at or even slightly above the minus 15-20% range previously guided”, even taking in the peak Summer period. Ryanair added, “based on this yield performance in the first half, “we expect the full year yield decline will be at or slightly more than minus 20% and accordingly, our full year net profit will be towards the lower end of the EUR200 million to EUR300 million range, previously guided”.

CEO, Michael O’Leary, remains optimistic, stating “the winners in a deep recession will always be those companies like Aldi, Lidl, McDonalds, and Ryanair who offer the lowest prices and the best service to consumers. We will continue to expand as others fail”.

But Aldi, Lidl and McDonalds are not cutting their average prices by 20%+ and investors remain wary about Ryanair’s growth profile. The airline’s shares gained 0.5% yesterday on the release of the Jul-2009 traffic figures, but remain over 5.5% below the close prior to last month’s first quarter financial results and yield guidance shock.