Is AirAsia too big to fail? It should be

Like most other airlines around the world, AirAsia has run into financial headwinds.  What happens in the next few weeks will determine its future shape; this will almost certainly be different from its present form, but for the sake of aviation and tourism in Asia, it is highly important that it survives.

On 8-Jul-2020 EY served notice of “significant uncertainties with respect to the Company’s ability to continue as a going concern”.

AirAsia is now seeking investors, including a possible raising of some nature from its existing shareholders.

Losing the region's leading LCC would at one stroke threaten a large part of the region's tourism industry – in 2019 AirAsia carried more than 35 million passengers.

On 9-Jul-2020 AirAsia’s auditors EY raised “significant uncertainties with respect to the Company’s ability to continue as a going concern”.

Trading in the stock of Airasia Group BHD was suspended on 8-Jul-2020 for the announcement and shares subsequently ended the day 12% down, falling below MYR70. The price has subsequently stabilised and, at close of business on 14-Jul-2020, was at MYR74, as discussions continue around the various options being pursued by the company.

With Air Asia already carrying a relatively large debt burden when the year began, the grounding of a large part of its fleet (in early Apr-2020 almost the entire fleet was grounded) and closure of international boundaries, for what is largely an international LCC, left the airline with a high cost burden and reduced opportunity to generate revenues.

There are positive signs. As founder Tony Fernandes said on 9-Jul-2020, “On 7 July, we registered our highest post-hibernation sale with 75,000 seats sold in a single day, reflecting pent-up demand and signalling green shoots of recovery….In times of difficulties lie opportunities.  We have weathered many crises and emerged stronger. We won’t waste this crisis and we will come out stronger.”

There are two eras in Asian aviation: before and after AirAsia

Such has the airline’s significance to the region been.

AirAsia has arguably made the most significant impact on the airline industry of any airline in history. Its arrival genuinely meant “now anyone can fly”.

The original LCC model, Southwest Airlines, was the genesis of the low cost concept, which much later spawned easyJet and Ryanair in Europe. They, in their turn, created revolutions in travel.

But each was operating in what were effectively domestic markets, and ones that were already well established aviation environments.

By contrast, AirAsia had to overcome the massive obstacle that, if it were to grow outside its relatively small domestic Malaysian market, it had to overcome national boundaries. And its arrival in 2003 was on a scene dominated by often nationally owned and controlled flag carriers, whose governments often had a strong vested interest in securing the interests of the airline – not the wider travel industry and its consequent vast economic impact.

Additionally, the rapid growth of low cost intra-regional operations spawned and led by AirAsia has done much to stimulate regional integration, as tourism – accompanied by business links – proliferated.

AirAsia has been a remarkable success story – for the region

To achieve the remarkable impact that it has had – against all the odds (and "expert" opinions) – from a tiny bankrupt Malaysian airline to becoming the largest airline in Asia in the space of a little over 15 years, required first of all a ridiculous stretch of imagination. But achieving that goal was down to several factors.

The main impetus came from the dream and extraordinary drive and imagination of one man, Tony Fernandes – necessarily backed by a supportive team.

But even that momentum also needed timing.

The timing was perfect. East Asia was on the move economically and the stout protectionist regimes that prevailed in intra-regional markets were ripe to be disrupted.

The instant impact of ultra-low fares on a whole new electorate also did much to influence new thinking in government circles, provoking a new liberalism in market access thinking.

AirAsia was allowed to expand; it was so clearly in the public interest to do so. There was already an underlying, but as yet unrealised, multilateral move through ASEAN (the Association of Southeast Asian Nations) to produce open skies among its members, similar to a diluted version of the European Union's liberal regime.

One of the important initiatives in this still-international heavily regulated industry was to allow several AirAsia initiatives to establish cross-border joint ventures – locally majority-owned but AirAsia-branded national airlines. This made multiple international linkages – and efficiencies – possible, both within ASEAN and beyond; but it also now makes retrieval of the financial situation more complex.

ASEAN has talked for years of an open skies regime. Now is the time for action

Those joint ventures are a feature which now becomes important, as AirAsia meets the financial challenges delivered by the coronavirus challenge. Thai AirAsia, Philippines AirAsia, India AirAsia and other JVs are in the process of recapitalising, or perhaps sell-down, at the respective national levels.

And for ASEAN, whose tentative moves were both catalysed by and supported AirAsia's expansion, a diminished AirAsia would mark a great step backwards for the regional development.

Hoping for multilateral action at this stage in the global crisis is perhaps wishful thinking, but it is important that ASEAN leaders like Singapore, Malaysia, Thailand, Indonesia, Vietnam and the Philippines step up to support a sustainable framework for a future AirAsia and other airlines.

While every country is focused on its own affairs, a multipronged entity like AirAsia, which belongs everywhere yet nowhere (except Malaysia, where it held a 60% market share in 1Q2020), can easily be second in line behind national flag carriers.

Inevitably, the country with the greatest interest in AirAsia's future, Malaysia, has a key role to play, although whether that will be financial or in brokering a corporate solution remains very much uncertain.

As markets – and demand – reopen gradually, AirAsia is adding capacity, to a stage where it is now operating at around one third of the capacity at the same time in 2019. 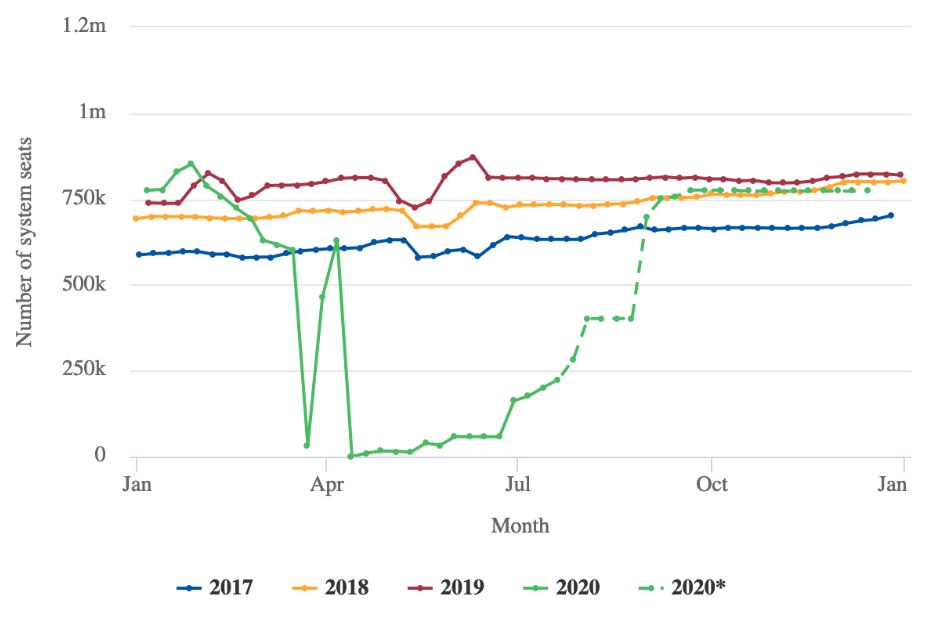 But these levels are well below what is needed to stop the bleeding. And the uncertainty that surrounds the rate of reopening of national borders does little to help any airline to plan its recovery track.

It also makes it near-impossible to estimate the level of funding that will be needed before airlines can become self-sufficient and even profitable once again.

The immediate need is to achieve a war chest large enough at least to ensure a buffer until the end of 2020. What happens after that will determine the future, not just of AirAsia, but of all global airlines.