North and South American airline stocks declined for Friday (17-Sep-2010) as the wider market faltered late in trading on news US consumer confidence plummeted to a one-year low for Sep-2010. The Dow (+0.1%) ended the session up only marginally, after stronger gains in the morning.

In Latin America, Chile’s IPSA (-0.2%) and Brazil’s Bovespa (-0.9%) were both down for the day, mirroring declines in the US due to the weak economic data. However, Latin American markets bounced back for the week, following declines the week prior.

Investors concerned LAN-TAM merger will not go ahead

LAN Airlines (-1.6%) and TAM Airlines (-1.4%) were both down after a report by Bloomberg, the carriers stocks show investors are not confident LAN can complete its takeover of the Brazilian airline, with TAM trading 18% below LAN’s 13-Aug-2010 offer price.

Global Equity Administradora de Recursos employee, Octavio Vaz, told Bloomberg investors are concerned the merger will be blocked or delayed by regulators, despite Brazilian Finance Minister, Guido Mantega, stating the agreement complied with the country’s foreign control limits for airlines. However, Mr Vaz stated investors did not take his comments seriously as it is not Mr Mantega who will make a final decision on whether the merger can go ahead.

In other LAN and TAM news last week, it was reported that LAN and TAM executives were in London studying the possibility of an agreement with British Airways involving a potential 5-10% stake swap. Iberia spokesman, Santiago de Juan, stated British Airways and Iberia are focused on their impending merger and “can’t confirm anything” regarding reports of a planned share swap.

However, LAN denied the reports it is in negotiations with other companies in the industry, reaffirming it is concentrating all efforts on the creation of the LATAM Airlines Group. 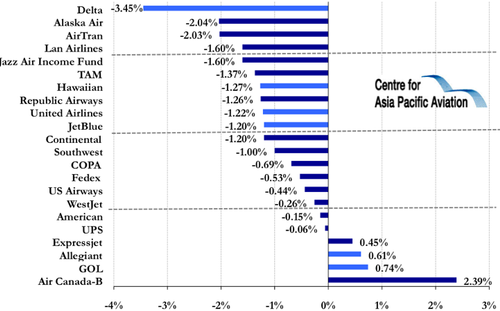