New Zealand’s Infratil dipped 0.6% on Friday, ahead of the release of the company’s monthly operating report for Wellington Airport and its investment airports in Europe.

Infratil reports domestic passenger numbers at Wellington Airport reduced in Dec-2009 and for the 12 months ended 31-Dec-2009, while international traffic rose in both periods. Meanwhile, cargo volumes dropped 24.9% at Glasgow Prestwick Airport, as volumes jumped 43.9% at Kent International Airport in Dec-2009. Infratil shares have lost a further 0.6% in trading on the NZX today.

The bookbuild was well supported, attracting bids from both new and existing New Zealand, Australian and international investors. The clearing price under the bookbuild was NZD1.91 per share. Therefore, institutional shareholders who elected not to take up their entitlements and ineligible institutional shareholders will receive NZD0.26 for each new share not taken up. The shares taken up are expected to be issued on 04-Feb-2010 and commence trading on the NZX on 04-Feb-2010 and on the ASX on 05-Feb-2010.

Auckland Airport shares will continue in trading halt and are not expected to resume trading until market open on 02-Feb-2010. The offer is fully underwritten by Credit Suisse (Australia) Limited and First NZ Capital Securities Limited, the joint lead managers.

Shares in Australia’s MAp lost 5.1% on Friday, following the launch of the pricing period for its distribution reinvestment plan (DRP) on 28-Jan-2010 (to end 10-Feb-2010), in respect of the distribution payable for the six months to 31-Dec-2009.

Security holders representing 8.8% of MAp's securities have a valid election to participate in the DRP for the period. MAp has determined that the securities to be allocated to participants under the DRP will be sourced from on-market purchases of existing securities. RBS Equities will be acting as MAp's broker in the process. Shares have gained 1.4% in trading today. 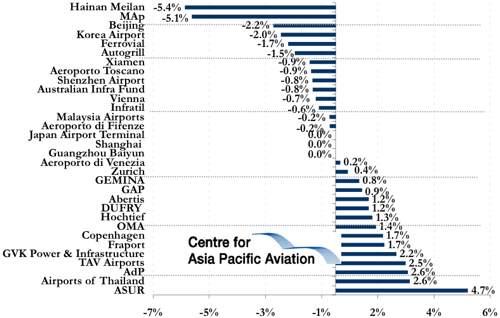