In Europe, Aeroports de Paris’ traffic continued to contract in Oct-2009, led by traffic declines at Paris Orly Airport, which saw a 6.7% deterioration in passenger numbers, down from the -3.4% reported in the previous month. Combined passenger numbers at Paris Charles de Gaul and Paris Orly fell 3.3% year-on-year, while aircraft movements fell 6.7%.

Elsewhere in Europe, shares in Fraport, operator of Frankfurt Airport, gained 3.4% in trading. The group was upgraded from 'hold' to 'buy' by Citigroup, citing a recovery in passenger traffic in 2010 and increased revenues from external activities as the drivers. 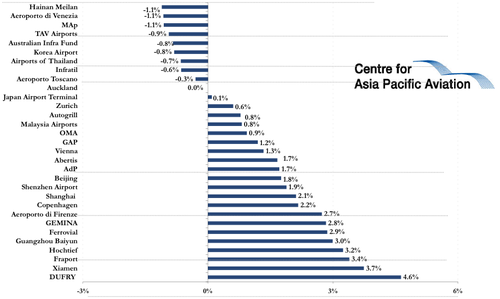