Indian LCC IndiGo announced it has received official approval to launch international operations to Bangkok, Singapore and Dubai from New Delhi and Mumbai, as well as operating between Muscat with Mumbai. According to the Indian Directorate General of Civil Aviation, IndiGo is now India’s equal second largest domestic carrier, level with Kingfisher Airlines at 18.6%.

The carrier will join an increasingly crowded international market from India, with Air India, Air India Express, Kingfisher Airlines, SpiceJet, Jet Airways and JetLite all operating international services from India. India has also been slowly opening its skies to more international competition, notably Middle East carriers such as Emirates and Qatar Airways as well as Asian carrier including Singapore Airlines and Air Asia.

IndiGo announced an MoU with Airbus for 180 aircraft at the beginning of the year. A firm order is expected to follow in several months. The carrier intends to order 30 A320s and 150 of the newly launched A320neo.

Skymark Airlines shares ended their upward run, with the company’s stock price dipping 3.8% in trading on Wednesday. Skymark released a downgraded profit forecast for FY2011, but stated it still expects to achieve an operating profit for 3QFY2011, on the back of steady increases in revenue. 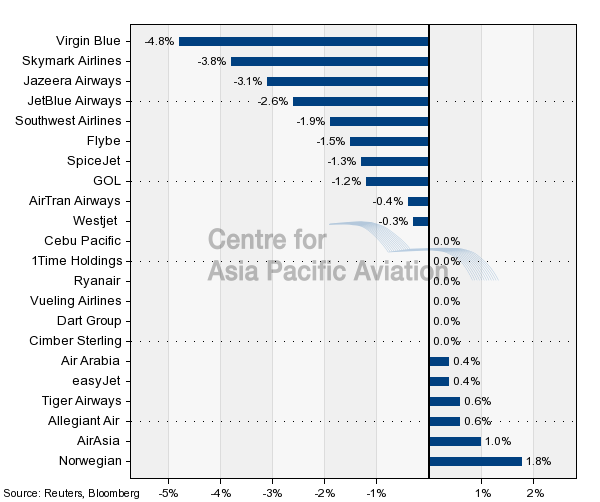