On the surface, India's aviation industry looks to be in rude health, but behind the strong headline traffic figures is growing financial pain. India's airlines reported continued strong domestic passenger growth of 22.3% in Jul-2011 following on from an 18% expansion in the first half of the year. India is now the ninth largest and fastest growing domestic market in the world. The Indian government anticipates that India would become one of the three largest markets in the world by 2020. 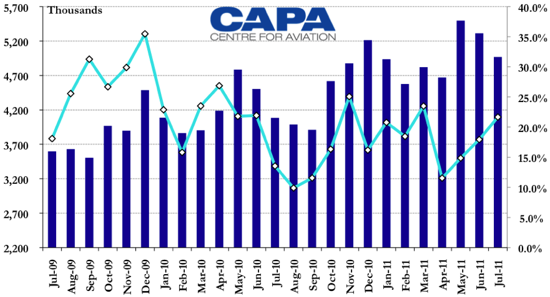 During Jul-2011, Vijay Mallya-promoted Kingfisher was again the largest domestic standalone carrier with around 1.1 million passengers, based on CAPA calculations. Jet Airways/JetLite had a combined passenger level of 1.2 million passengers, or around 26% of the market. 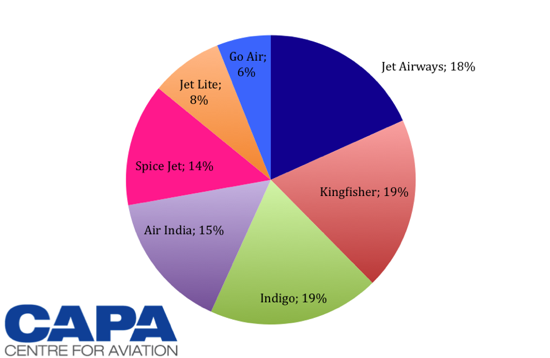 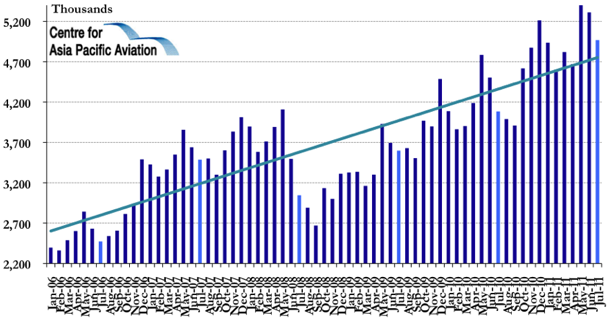 The most dramatic passenger growth in Jul-2011 was, as is generally the case, witnessed by the LCCs, driven by IndiGo with surging growth of around 38% based on CAPA calculations. GoAir (31%), JetLite (+30%) and SpiceJet (+26%) also reported growth of over 25%.

Passenger traffic growth in the Indian domestic market is expected to continue in Oct-2011, with domestic airlines expected to operate almost 30% more flights from Oct-2011 compared with Oct-2010 levels, marking the largest year-on-year increase in flights. The winter schedule will reportedly see 14,750 weekly domestic services as airlines expand their domestic networks and schedules, especially in the south of the country.

Meanwhile, fares are expected to increase in Oct-2011 by an average of around 8% in the domestic market, with the government, which leaves it to market forces to decide fare levels, raising apprehensions that there could be a rise of 30% or more by early next month.

SpiceJet chief commercial officer Samyukta Sridharan stated that the carrier expects load factors to be higher, adding: “We do see a decent demand rise in air travel soon. There is no control order from the government on regulating airfares. There is a possibility of a similar airfare hike as last year.”

Airlines are reportedly contemplating an increase of 8% to 10% on metro routes, while 'exclusive' routes likely to see steeper increase of between 12% and 15%. All major airlines including Jet Airways, Kingfisher and Air India, and also the nation's LCCs, are planning to increase fares, according to local media reports.

Airlines expect domestic load factors to reach 85% to 90% levels in the upcoming three months. Oct-2011 will mark the beginning of the festive season with Dussehra which will be followed by Diwali, Bakhrid and Christmas. The winter vacation for schools will also fall in Dec-2011.  Typically the July to September period is the low season for Indian airlines, with October to December representing the peak period.

Looking further ahead and growth in the Indian market is expected to continue in coming years, driven by a number of factors. The nation’s economy, the third largest economy in Asia, is growing at around 8%, resulting in higher discretionary incomes and greater business travel. The burgeoning middle class is increasingly opting for air travel over rail travel, while growing demand is also being seen in smaller cities, driven by growing regional expansion.

In Jul-2011, India’s airlines handled 1.3 million international passengers, for a 8.5% year-on-year increase, according to the DGCA.

Air India is still the largest Indian carrier in the international market, with a 38.2% seat share and a 46.6% capacity (ASKs) share.  This international network strength provides the struggling national carrier with international connectivity from its still-sizeable domestic network. In this sense, Air India has benefited from access to all the main markets, with 140,675 weekly seats across its international network. However, according to a damning Comptroller and Auditor General (CAG) report released last week, all international routes of the carrier were loss making by 2009/10.

For every one international seat, Air India operates 2.2 domestic seats, although it operates 2.3 more ASKs internationally than in the domestic market.  Jet Airways is the second largest operator of international capacity (seats and ASKs) to/from India, and the largest by frequency, and is quickly catching up to Air India.

Jet Airways is followed by Emirates, the largest foreign carrier to serve India (with around 10.8% of international capacity to/from India), then Air India Express as Air India has transferred many of its services to its low-cost subsidiary. Kingfisher Airlines is the fourth largest Indian airline by international capacity (seats and capacity) but the seven largest overall behind Qatar Airways and Air Arabia. 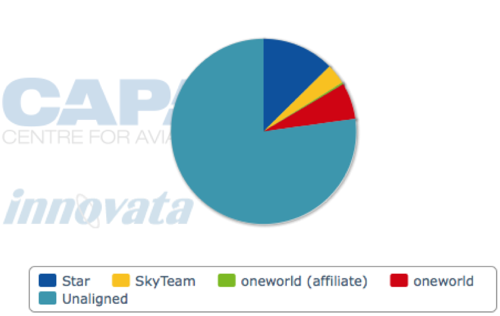 SpiceJet and IndiGo now also serve the international market but their expansion has been much slower, due regulatory limitations on international expansion.  IndiGo Airlines has recently launched its first international flights and has ambitious plans to expand into regional markets but currently has only limited traffic rights, an issue that could impact its future growth and entry into some key markets. SpiceJet is also expanding its international presence. See related article: IndiGo launches international services - targets 15% of seats in this segment by Mar-2012

The domestic India market continues to report strong traffic growth, and was the fastest growing domestic market in Jul-2011, according to IATA. While international growth levels more subdued, the launch of international services by the new crop of Indian carriers - led by IndiGo and SpiceJet, two of the world's fastest growing LCCs - will see growth in this arena pickup in the months and years ahead.

But the paradox of Indian carriers is that they are struggling financially at a time when the underlying market demand and economic environment is strong. Since the start of the year high fuel prices and fare discounting in the domestic market, led by Air India, have combined to weaken financial performance. Meanwhile, international expansion by private carriers is being curtailed due to the government restricting the allocation of traffic rights in an effort to protect Air India.

All three listed carriers, Jet Airways, Kingfisher and SpiceJet reported losses during the traditionally strong first quarter. If these trends continue, the private airlines could lose USD450-550 million in the 12 months ending 31-Mar-2012, while Air India's losses could reach USD1.75 billion to USD2 billion, with only IndiGo expected to post a profit, but even this will be driven largely by sale and leaseback transactions. This represents a quite significant turnaround around from the optimism that existed at the start of the year. The industry will be hoping for a particularly buoyant third quarter, traditionally the strongest of the year. 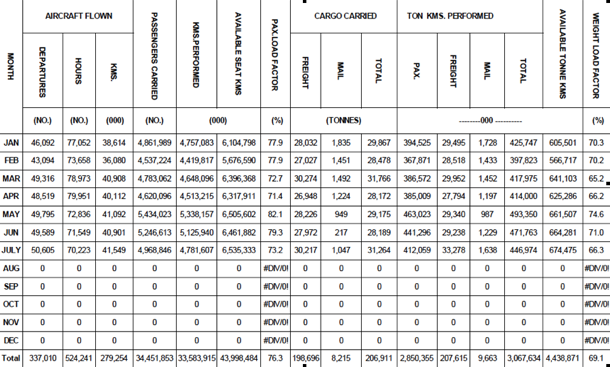 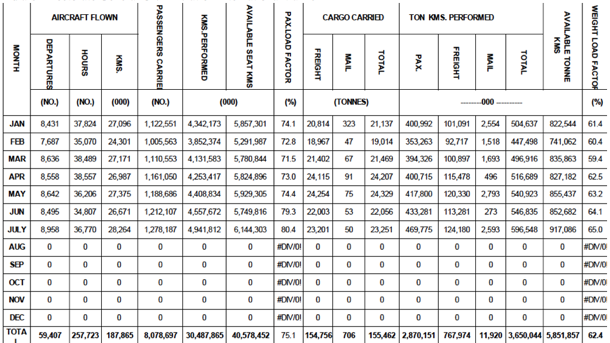