Global stocks surged the most since May-2010 as manufacturing in the US and China grew faster than economists estimated, bolstering optimism in the economy. Shares in the Australian market were also boosted by strong economic data as GDP grew strongly in 2Q2010.

Shares in Virgin Blue surged 11.6% yesterday, with investors appearing to back CEO John Borghetti’s aggressive strategy to lure a greater share of the business market from Qantas, as well as its recent network overhaul which culminated in the removal of a number of loss-making routes. Shares in Qantas were up 2.0%.

Shares in Kingfisher Airlines also gained yesterday (+5.1%) as the carrier announced plans to raise more than USD350 million in funding, through a combination of global depository receipts and a local equity offering.

The carrier also benefited from news that the Reserve Bank of India (RBI) has agreed to ease rules for the restructuring of loans for the nation’s debt-laden airlines. Banks will now be permitted to restructure unsecured aviation loans without classifying them as non-performing assets.

Air China shares, meanwhile, gained 2.9%, following the previous day’s 1.8% decline. The carrier earlier this week entered into a supplementary agreement with Boeing to acquire 15 B787-9 aircraft. The company in 2005 was approved to purchase 15 B787-8 aircraft. 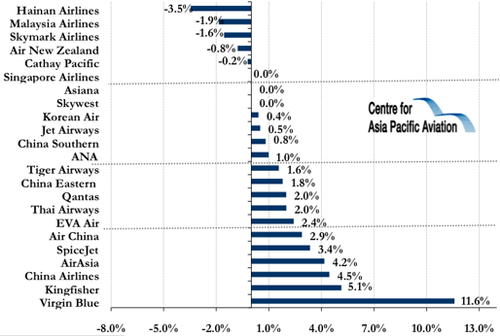