Airline traffic growth in India remained in double digits last month, with traffic now rebounding to well above pre-recession levels, at an average growth rate of almost 21% in the year-to-date. Meanwhile, the stability in the sector has improved, as continued passenger growth combines with a pick up in business class travel - and hence yields.

Indian aviation, which entered negative territory earlier than other Asian nations and the rest of the world, has also been one of the quickest to recover, with domestic traffic now some 34% above Jul-2008 levels (17% above Jul-2007 and 65% above Jul-2006 levels).

However numbers were weaker for a second consecutive month on a month-on-month basis in Jul-2010, from a record high in May-2010. July is a traditionally weak month for travel demand in India, however traffic is expected to pick up again after mid Sep-2010.

Jet Airways’ shares have been the strongest, with SpiceJet also gaining strongly, while Kingfisher shares have been dogged by concerns about high debt levels. Indian airline stocks have also been buoyed by hopes that the strong economy will result in improved demand, especially given the start of the holiday season in October. 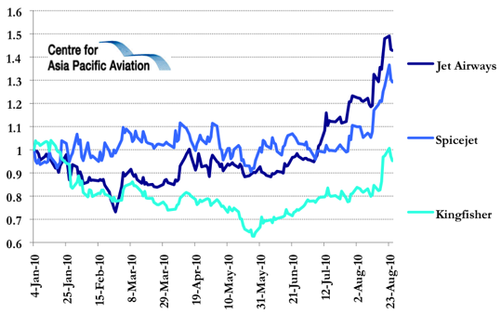 The carriers' share price gains in the month were also boosted by reiterations by Civil Aviation Minister, Praful Patel, on 19-Aug-2010, that the Government is examining a plan to allow foreign carriers to invest in domestic airlines.

The government has also agreed to a one-year extension to a Jul-2010 deadline to phase out 400 foreign pilots from commercial carriers in a bid to increase the number of Indian pilots.

The carriers’ share prices have also been boosted by figures released on 18-Aug-2010 by the Indian Ministry of Civil Aviation that overall domestic passenger numbers in India increased 13.5% to 4.1 million.

Vijay Mallya-promoted Kingfisher remained the largest stand-alone carrier (by domestic passenger numbers) in Jul-2010, handling 815,000 passengers (a 1.7% year-on-year reduction), with an average load factor of 79.3%. Jet Airways, meanwhile, reported a 14.8% increase in domestic passenger levels, to be the second-largest single carrier in the market, although the combined Jet Airways-JetLite grouping handled 1.1 million passengers in the month.

Among the LCCs, Indigo handled 691,000 passengers with a 38% year-on-year increase (to witness the fastest  growth among the carriers) while SpiceJet passenger numbers increased 20.3% to  540,000. IndiGo is now just a small margin behind third position (currently state-owned Air India with 708,000 domestic passengers and growth of 21.6%).

However, Kingfisher, along with Paramount, reported year-on-year domestic passenger reductions, of 1.7% and 83.3% respectively in Jul-2010. Paramount’s domestic passenger levels slumped to only 12,000 in the month due to the grounding of most of its aircraft (Paramount is, however, permitted to operate despite the suspension of its licence by the Indian Directorate General of Civil Aviation (DGCA), based on an interim order handed down by the Madras High Court last month. The DGCA requires a domestic carrier to operate with a minimum of five aircraft – Paramount operates one).

LLCs lead the way in return to traffic growth

The reversal of negative traffic growth in 2010 has been predominantly led by LCCs. Perhaps the most significant recent strategic development in the Indian domestic market has been that it is rapidly turning low cost.

The combined market share of independent LCCs is now over 35%, while the nation’s full service carriers now deploy almost 70-80% of their domestic capacity under budget brands, such as Jet Konnect and Kingfisher Red, pushing the share of LCCs up to around 70%. The national carrier, Air India, is now the only airline in the market without a domestic LCC or low-cost brand, although it is planning to follow suit.

Most load factors above 70%, with the exception of Air India

Most domestic carriers reported load factors of above 70% for the month, with the exception of Air India, with a load factor of 62.5% in the month (the carrier is currently conducting a route rationalisation programme, involving the redeployment of capacity from non-profitable to profitable routes).

At the other end of the spectrum, Paramount’s load factors stood at 86.9%, with other load factors in the 70-80% range. However, the Jul-2010 load factors lagged Jun-2010 levels, with this attributed to reduced travel due to the onset of the monsoon season.

As a whole, Indian carriers have generally been careful in adding capacity back into the market, with single-digit capacity growth anticipated for the full year across the industry. This is likely to increase to double-digit growth in the future. This capacity discipline has provided a much-needed boost to load factors and yields, which will in turn have a flow-on effect into profitability. 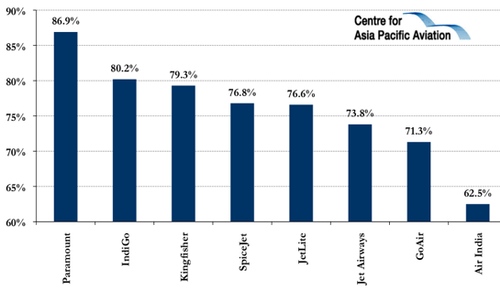 Separately, India’s Minister for Civil Aviation, Praful Patel, commented that Indian airlines would soon be required by law to compensate passengers in the event of long delays and sudden cancellations. Airlines that fail to notify passengers travelling on confirmed tickets will be forced to compensate passengers up to INR2,000 (USD43) for sectors longer than one hour, INR3,000 for one to two hour sectors, and up to INR4,000 for longer sectors.

Domestic growth first returned in Jun-2009, with growth in every subsequent month, following a turbulent period from Jul-2008 onwards, characterised by weak demand and excess capacity. Financially, the domestic airline industry has been in turbulence for the past two financial years, with weak demand exacerbated by escalating fuel prices in mid 2008.

The industry is estimated to have lost approximately USD1.7 billion in 2009/2010, although it will likely be profitable in the 3 months ended 30-Jun-10 due to a combination of improved load factors and yields. The sector is expected to rebound in the current fiscal year (ending Mar-2011), with India’s private carriers including Jet, Kingfisher and SpiceJet, estimated to post a combined net profit of INR12-14 billion (approximately USD258-301 million), compared with a loss of INR30 billion (USD639 million) last year.  Meanwhile, Air India will continue to be loss-making, with India’s Minister for Civil Aviation, Praful Patel, stating Air India’s parent, the National Aviation Company of India Ltd (NACIL) is targeting break-even by 2014-15.

Meanwhile, the traffic outlook for the nation’s carriers is also optimistic, with a further pickup in traffic demand expected post Sep-2010, coinciding with the festival and holiday season.