Indian Civil Aviation Minister, Praful Patel, at India Aviation 2010 air show, stated he expects the Indian civil aviation sector to see recovery by early 2011, based on the current growth trajectory, stating, “we have been able to weather the thunderstorm that struck the world with composure and I am looking at 2010 with cautious optimism and am hopeful that the worst will be over this year ".

Minister Patel added that the country would require at least 3,000 aircraft over the next ten years to keep pace with growth.

Airbus India President, Kiran Rao, stated it is in talks with Indian airlines (current Airbus customers including Jet Airways, Kingfisher Airlines and IndiGo Airlines) and expects to receive new aircraft orders in FY2011. Mr Rao added that he expects India to account for 10% of the company's global commercial aircraft revenue in the next four to five years, up from the current 6-7%. Boeing’s India President, Dinesh Keskar, commented that the manufacturer is “quite bullish on India”, with an expectation of a need for 1,000 aircraft over the next 20 years.

In other developments, Jet Airways Chairman, Naresh Goyal, stated the carrier plans to join a global alliance soon, commenting, “everybody has offered, [but] we haven’t yet decided which alliance [to join]. We are studying everything”.

Among the major Indian airlines, Kingfisher Airlines has sign a MoU to join the oneworld alliance in 2011, while Air India is a Star Alliance member (but has yet to integrate its operations), meaning SkyTeam is the only major airline yet to have an Indian airline partner.

Mr Goyal added that the carrier expects to commence FY2010-11 with a stronger first quarter year-on-year. However, CCO, Sudheer Raghavan, commented that improving yields will be “a challenge” and costs, including fuel and airport charges, are still increasing. The carrier now plans to focus on existing routes, is currently examining the possibility of increasing fares and plans to reconfigure at least 17 aircraft to all Economy class, to increase low-cost offerings and improve load factor.

SpiceJet expects to break-even in Mar-2010

Meanwhile, SpiceJet CEO, Sanjay Aggarwal, stated the carrier would likely break-even by end-Mar-2010. Mr Aggarwal added that it is currently "studying" whether it would increase its fares, and commented that a 10% increase would be "reasonable" in the present circumstances.

The carrier also confirmed plans to raise USD50-75 million by issuing preferential shares by Sep-2010, to support its future international expansion and fleet growth requirements (the carrier  (plans to induct nine additional aircraft to its 19-aircraft fleet by 2012).

Also in the LCC market, IndiGo Airlines President, Aditya Ghosh, stated the LCC is looking at linking more Tier-II and Tier-III cities, with a plan to increase its proportion of services to smaller cities to 60% of the when it increases its network to 235 daily services by the end of 2010. The carrier, which plans to take delivery of nine aircraft in the 12 months to Mar-2011, added that after reporting a 15% increase in yields in 3QFY2010, yields are expected to rise by 10-15% in the current quarter.

For this and more coverage of India's aviation market, subscribe to CAPA's Monthly Essential India report. 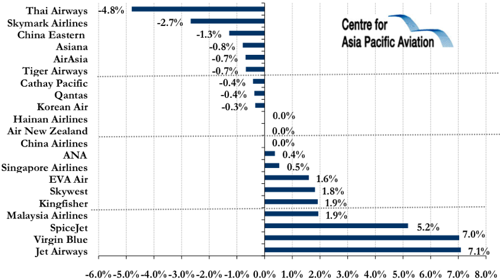