After the dramatic changes of the last five years, the Indian aviation market is seeing the emergence of a more favourable environment. India’s GDP growth slowed from over 9% in 2007/08 to 6.1% in 2008/09. However, given the contraction globally, this was a relatively a good result. The economy appears to be recovering earlier than expected, with GDP growth of 7.9% in the last quarter, ahead of expectations.

Domestic air traffic is also showing a return to growth. After 12 consecutive months of  year-on-year declines in domestic traffic, July 2009 saw a return to positive territory, which  has  continued  since  then. 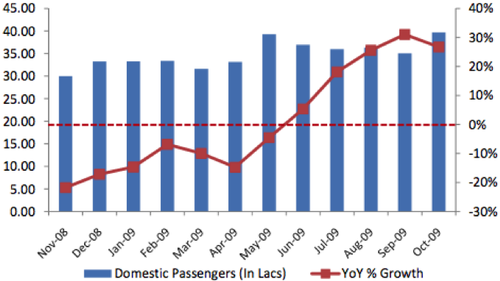 This  is  partly  due  to  the  impact  of  a  lower  base resulting  from  last  year’s  decline, the  industry  is reporting  a  discernible  increase  in  demand  as  business  and  consumer  confidence  increases,  although yields continue to remain depressed.

CAPA India has prepared a 22-page summary of the prospects for Indian aviation in 2010. The report can be downloaded by clicking here.