Latest traffic data from China and India suggest both markets are showing signs of a recovery. Outside the two regional powerhouses, load factors are improving, but yields remain weak.

Air China stated the “growth trend continued” in Sep-2009, recording across-the-board double-digit passenger growth, with overall traffic (RPKs) rising 11.4% (off a negative base in Sep-2008). Load factors were up slightly (+0.8 ppts) to 76.6%. 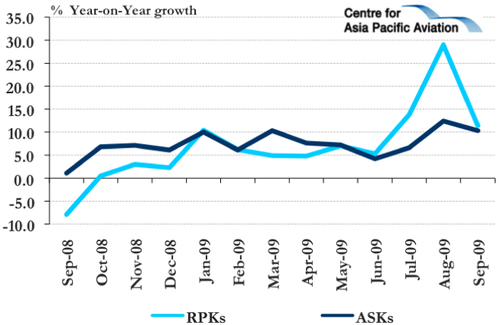 Air China stated that cargo market “had a delightful improvement”, with year-on-year and month-on-month improvements. Cargo volumes were up 27% in the period.

Separately, Dragonair CEO, James Tong, stated that signs of a recovery in the Chinese air freight market are "speeding up the negotiations" between Cathay Pacific/Dragonair/Air China to establish their proposed freight JV in Shanghai. The venture will be established on the platform of Air China Cargo Co, now a wholly-owned subsidiary of Air China. Cathay Pacific will reportedly inject freighter assets into Air China Cargo in return for a 49% holding in the combined venture.

In other Air China news, parent, China National Aviation Holding Co, stated it would sell CNY3.5 billion (USD513 million) worth of one-year bills on the interbank market, with the proceeds to be used to supplement its working capital and repay bank loans.

In the Indian market, the Indian Ministry of Civil Aviation reported that domestic Indian airlines experienced a 31% year-on-year increase in passenger numbers to 3.5 million in the traditionally weak Sep-2009 period, for four consecutive months of domestic passenger number increases, after a 12-month contraction from Jun-2008. 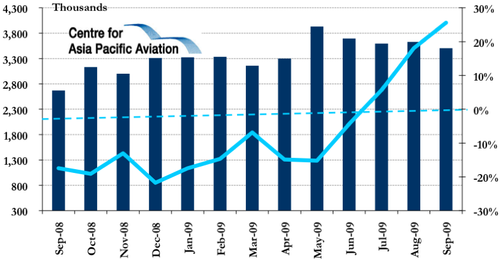 In the nine months to Sep-2009, the carriers handled 32.0 million passengers, for a 1.0% year-on-year increase and the first time in the past 18 months that domestic passenger traffic has shown positive growth.

Singapore Airlines meanwhile reports it handled 1.4 million passengers in Sep-2009, a 10.0% year-on-year reduction, on the back of a 12.5% capacity (ASKs) reduction. 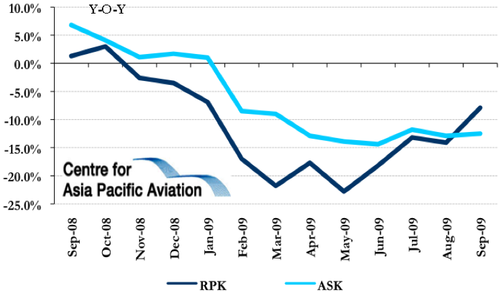 The capacity reduction, which exceeded a 7.9% traffic (RPKs) contraction, in combination with fare promotion during the month, “helped to mitigate the decline in loads”. Overall passenger load factors improved by 4.0 ppts to 80.9% in the month, for the first load factor improvement in over 12 months.

However, the carrier earlier this month stated that while yields have improved in 3Q2009, they would likely to remain negative until the end of 2009. At the time, CEO, Chew Choon Seng, stated that “the trends are moving in the right direction, but we are not out of the woods yet. We hope it will hold, but it's hard to tell”. 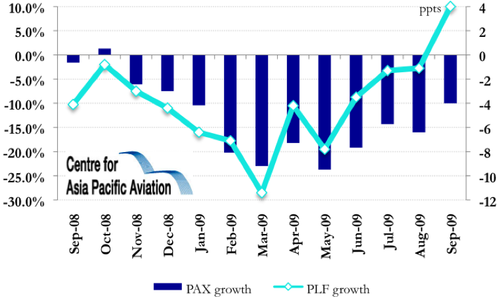 The freight market, meanwhile, remains depressed, with cargo down 16%, for two consecutive Septembers of freight contractions. 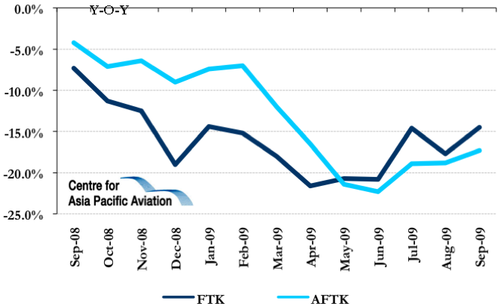 Qantas sees the start of an improvement in demand

Qantas CEO, Alan Joyce, has told The Australian that the carrier is "starting to see an improvement in demand", especially in Economy travel. As a result, the carrier is now considering increasing Economy and Premium Economy seating on some short-haul international services, potentially reducing the number of premium seats. The move is aimed at improving yields by approximately 8%. Mr Joyce stated yields are "still terrible", but volumes are "better than expected".