Brazil’s Ministry of Defence, in a Bill sent to Congress, proposed to raise the foreign ownership cap applying to airline ownership, potentially enabling international parties to acquire up to a 49% stake in Brazilian airlines (up from the current 20% limited). GOL’s shares were 2.3% lower yesterday.

The Ministry, in its submission, stated the measures are designed to “increase the supply, competition, and quality of services”, with additional foreign capital enabling the nation’s airlines to expand in line with increased demand levels.

The ownership regulations represent one aspect under a government proposal to modernise air transport prior to the World Cup and Olympics Games, to be hosted in Brazil in 2014 and 2016, respectively, with large increase in air traffic expected over these periods.

The Brazilian Senate approved a Bill raising the limit for foreign ownership in Brazilian airlines to 49% in Nov-2009, although further approvals from other areas of Government were still required.

Last week, the Director of Brazil’s Civil Aviation Authority (ANAC), Solange Vieiera, stated he expects Brazilian air traffic to grow by “another 10% or even more” in 2010, following a significant expansion (of 17% growth) in 2009.

Mr Vieiera stated that due to this significant growth, “some airports could reach the limits of their capacity”. He added, “we are conducting a study to see which airports are closest to capacity. We will then make preventive investments”.

In the US market yesterday, Southwest Airlines celebrated its 25th Anniversary of service at both Chicago Midway and Lambert-St Louis International Airports. The LCC has expanded significantly at these two destinations over the past 25 years, reflecting its overall strong growth profile up until the global economic crisis hit in 2008, with details of the expansion at the two airport as follows:

Shares in AirTran and Southwest slipped 1.1% yesterday, while shares in JetBlue, Allegiant and WestJet all gained, by 0.6%, 0.7% and 1.4%, respectively. 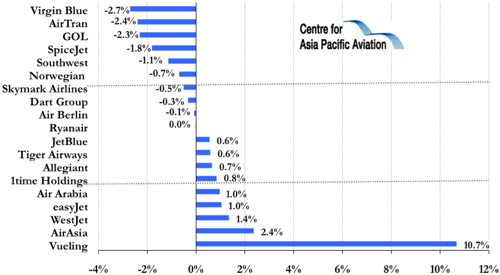