Fitch Ratings' Dec-2010 outlook report for US airlines stated continued positive trends in passenger yields and unit revenue, linked to the steady recovery of high-fare business travel demand, are the critical drivers of credit quality improvements for the sector in 2011. The rating outlook for US airlines is “positive”.

Fitch noted that its mid-single-digit unit revenue growth forecast for 2011 hinges on a continuation of the favourable fare trends that helped drive a rapid recovery in passenger RASM performance in 2010. Increasing confidence with regard to revenue growth will be held in check by growing concerns over global energy demand and expected volatility in crude oil and jet fuel prices.

Fitch added that US airlines' success in addressing major liquidity concerns through capital raising transactions and improved cash flow in 2010 has removed a primary source of ratings pressure, providing flexibility in meeting future cash obligations. However, the ratings agency warned that airlines remain “uniquely vulnerable to devastating external demand and fuel price shocks that have the power to rapidly undermine cash flow and constrain access to the capital markets”.

Despite the improved outlook for 2011 and overall optimism about yield trends, JetBlue in Dec-2010 downgraded its unit revenue (RASM) outlook for 4Q2010 from the +10% to +13% range to +8% to +10%. Passenger revenue per ASM was also downgraded from its previous guidance of +12% to +15% to a +10% to +12% range. The carrier added that ticket sales for the holiday season could be weaker than expected. 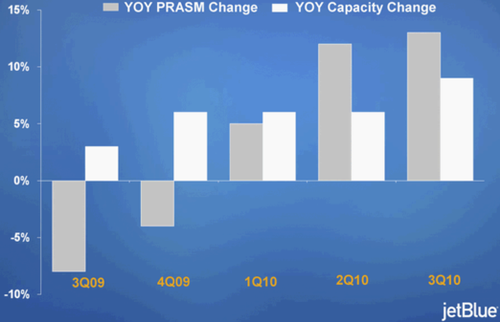 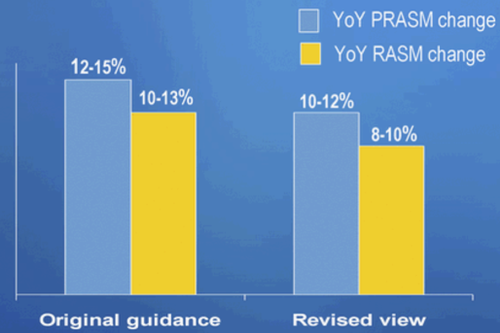 CFO Ed Barnes said: "We had planned on the peaks being slightly stronger than maybe what the peaks are turning out to be. Instead of holding out for high-fare travellers, JetBlue had to fill more seats with passengers at lower fares.”

JetBlue has been adding capacity back into the market faster than many of its competitors and appears to have been overly optimistic with its forecasts. The carrier’s revenue trends, however, continue to trend in the right direction, with continued growth expected in the last quarter. 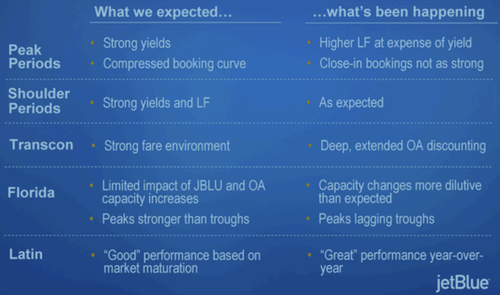 Standard & Poor’s has raised its ratings outlook for JetBlue to "positive" from "stable" on an improved financial profile. “The outlook revision on JetBlue is based on improving earnings and cash flow, which could result in an upgrade over the next year,” S&P stated.

Delta and American stated they are not seeing the kind of weakness that JetBlue reported with Delta CFO Hank Halter stating: "Our demand for Thanksgiving holiday was strong and it was up year over year, and we're expecting similar going forward.” The carrier expects a profit in 4Q2010 and stated it has not seen weakness in upcoming holiday sales.

AMR Corp CFO Bella Goren similarly stated advance bookings through the remainder of the year look strong with business travel also picking up. The carrier expects 4Q2010 PRASM to increase by around 7% in 4Q2010 with advanced bookings stronger than in 2009. The carrier added that it feels confident about its revenue-generating ability for 2011. "We are also encouraged by the fare environment, with fewer sales and fare levels that are actually going up in some markets, especially on international routes,” Ms Goren said.

Southwest Airlines has also noted booking strength for Dec-2010 and added it expected "another solid revenue improvement" in 4Q2010 with RASM up by around 13%. RASM increased by 10-12% in Nov-2010. Southwest CFO Laura Wright called the results "pretty remarkable" considering that the nation is still struggling with 9.8% unemployment and business travel has not fully recovered from the recession.

US Airways President Scott Kirby stated he saw "no evidence that things are sliding backward" in terms of revenue.

In Nov-2010, JetBlue, in addition to United Continental, Southwest, US Airways and Allegiant all reported continued revenue growth in the month, which was also characterised by strong load factors, continued careful capacity management and improved demands.

As the graphs below illustrate, US Airways, Southwest and JetBlue has reported PRASM growth in most months in 2010. 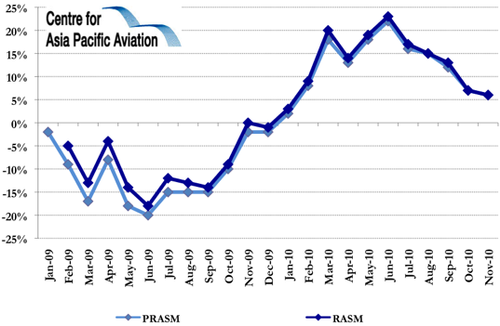 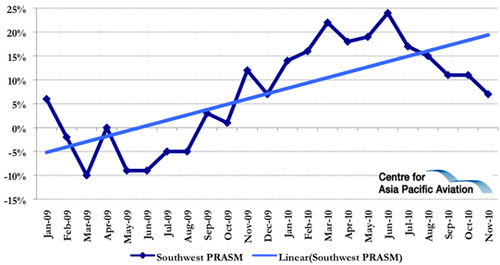 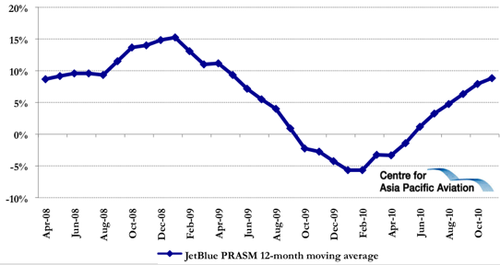 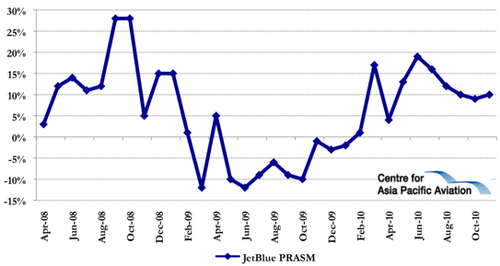 Strong load factors for US majors

Meanwhile, all of the major US airlines reported load factor improvements in the month with all carriers, including Southwest, reporting load factors above 80%.

Load factors ranged from 80.1% for Southwest, which has worked hard to boost its load factor levels, to 83.0% at United Continental. 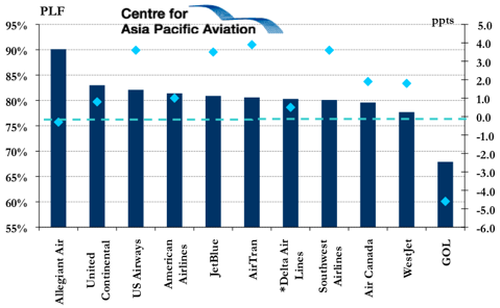 The US majors are also gradually and cautiously adding capacity back into the market, with single-digit capacity growth in the month ranging from 0.6% by US Airways to 6.9% at JetBlue. As is usually the case, capacity growth was more pronounced at the smaller Allegiant, which increased schedule capacity by 9.3% in the month. 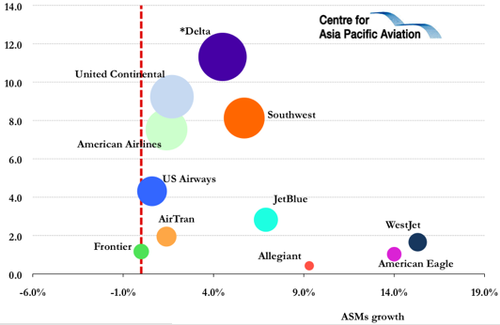 The trend was similar for traffic (RPMs) growth in the month although higher growth was witnessed, led by JetBlue (+11.7%) and Southwest (+10.7%). 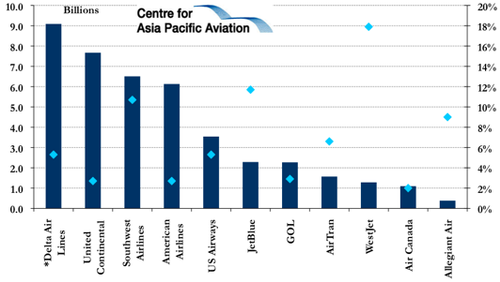 US Department of Transportation’s Bureau of Transportation Statistics (BTS) in Dec-2010 stated US airlines carried 57.3 million scheduled domestic and international passengers in Sep-2010, the most recent month of BTS data. This represented growth of 4.9% year-on-year for the largest monthly year-on-year increase since Sep-2007. The Sep-2010 passenger total was also 5.7% above Sep-2008 levels but remains 3.2% below the pre-recession level of Sep-2007.

Capacity (ASMs) was increased by 4.9% in the month, outpaced by a 6.6% increase in traffic (RPMs), resulting in a 1.3 ppt load factor increase to 81%. Domestic load factors stood at 79.9% and like the overall and international load factors in the month represented an all-time record for any September.

Meanwhile, the Air Transport Association of America (ATA) reported that passenger revenue, based on a sample group of carriers, rose 18% in Oct-2010, marking the 10th consecutive month of revenue growth. Miles flown by paying passengers rose more than 7% while the average price to fly one mile rose 10%. Passenger revenue improved 12.5% domestically and 31% in international markets.

The ATA added that it expects 43.6 million passengers to travel on US carriers over the winter holidays, up approximately 3% year-on-year. Daily passenger volumes are expected to range from 1.7 million to 2.3 million during the holiday.

Improved yields, traffic and profitability for US airlines

ATA President and CEO James May commented that with demand for air travel showing signs of improvement, airlines are “hoping to see industry profitability continue into 2011”.

“A sustained return of industry profits would enable the kind of investment that will benefit air transportation for the long term, which would help everyone,” Mr May said.

IATA noted that since 2007, US carriers have improved profitability successfully by adjusting capacity ahead of demand changes. Capacity (ATKs) was reduced by 6.6% by North American carriers in 2009, with growth of 4.2% anticipated for 2010 and 4.6% in 2010. Traffic (TKPs) is expected to increase by 10.9% in 2010 following a 6.3% contraction in 2009. For 2011, the weak US economic recovery is expected to limit demand (TKPs) increases to 3.7% (below the global average of 5.3%), driving the decrease in profitability. Yields are also expected to stabilise on a worldwide basis in 2011.