The world economy is set to contract by 1.3% this year before re-emerging next year with a 1.9% expansion, according to IMF’s April World Economic Outlook (WEO). It is the latest in a series of cuts to the global economic outlook by the IMF. 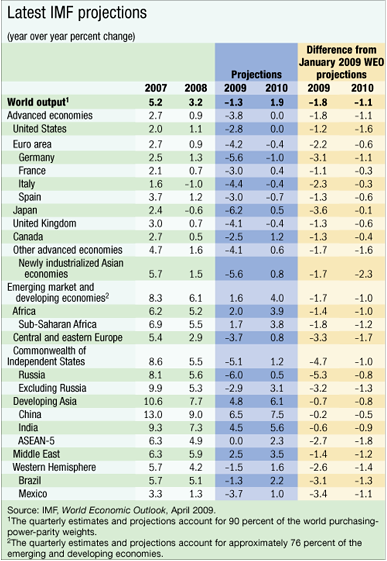 Emerging economies too are suffering badly, according to the IMF, and contracted 4% in the fourth quarter of 2008. The IMF added the damage is being inflicted through both financial and trade channels, particularly to east Asian countries that rely heavily on manufacturing exports and the emerging European and Commonwealth of Independent States (CIS) economies, which have depended on strong capital inflows to fuel growth.

Not out of the woods yet

With leading economic indicators for several major world economies continuing to point to deteriorating conditions over the near term, another downwards revision by the IMF is not out of the question.

2009 was already expected to be the most severe recession since World War II, but the IMF is now lowering expectations about the light at the end of the tunnel. It stated, “at 1.9% [global GDP growth in 2009], it would be sluggish relative to past recoveries”, adding, “confidence in financial markets is still low, weighing against the prospects for an early economic recovery”.

IMF Chief Economist, Olivier Blanchard, stated that growth would not return to its normal level until around the end of 2010. He warned that unemployment “will crest only toward the end of 2010”.

The IMF stated that achieving the projected turnaround will “depend on stepping up efforts to heal the financial sector, while continuing to support demand through monetary and fiscal easing”.