Many European countries are experiencing a swift return of passengers to the routes their airlines are flying as the coronavirus pandemic continues to abate and is no longer the first item on the television evening news – if it features at all.

That is the case in Iceland, which was locked down and isolated internationally for long periods of time in 2020 and 2021 but where, according to the airports' operator Isavia, capacity, passenger numbers and tourism will all return to 2019 levels, or close to those levels, by the third quarter of the year.

There are potentially circumstances, both operational ones and sociological ones, which could yet impede that resumption of normal service.

Iceland’s Isavia is responsible for managing the large (in area) but small (in population) country’s 13 airports, including the main gateway of Keflavík International, as well as air navigation services.

Notably, traffic is expected to reach 98% of 2019 levels in Sep-2022 and to exceed pre-pandemic levels by Oct-2022. Director of airlines and route development Grétar Már Garðarsson said traffic is recovering "faster than expected," as indeed it seems to be in most countries in Europe. 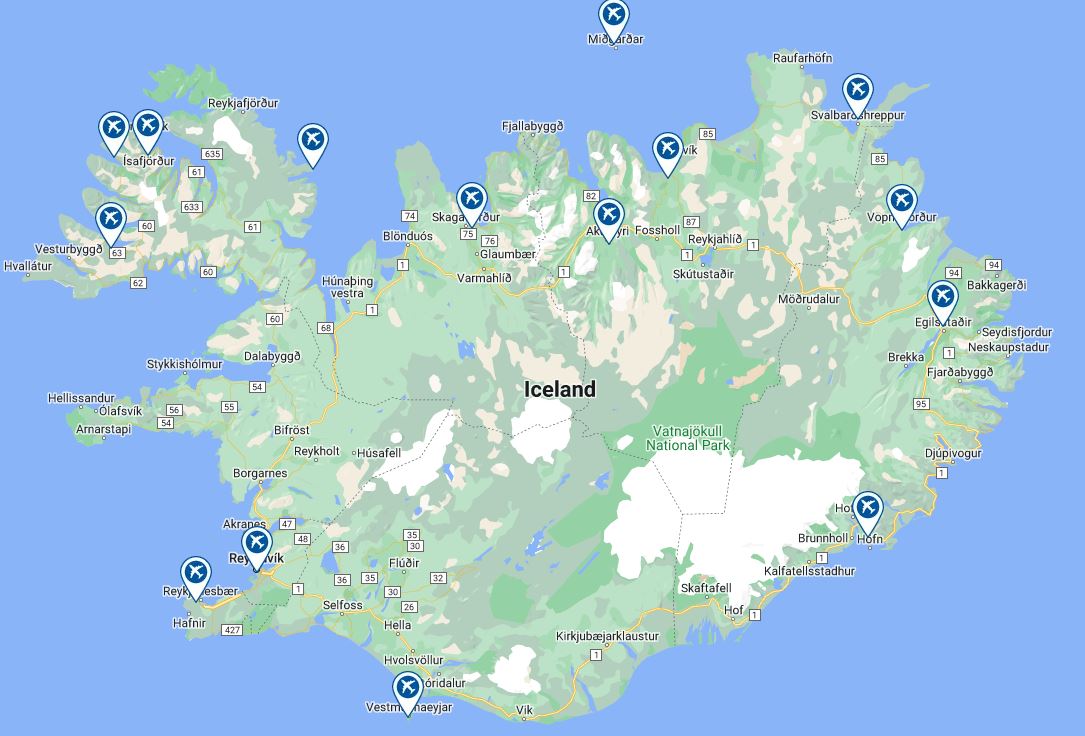 The passenger traffic chart below is from 2010, the year of the volcanic eruption in Iceland (Eyjafjallajökull), which brought it to the attention of the world.

It is evident how traffic began to increase quickly (a better exchange rate for visitors helped, as the Icelandic economy collapsed during the financial crisis), peaking at +36% in 2016, and to more than 10.5 million in 2018 before the collapse of the airline WOW Air brought the figure crashing down again.

Then followed the COVID-19 pandemic. The recovery in 2022 to date has been remarkable, at +546% in the period Jan-Apr, and suggestive of the tourism ‘staying power’ of the country.

Iceland was heavily locked down during 2020 and 2021, with hard-hitting restrictions on the international travel and tourism on which the country thrives.

Tourism a major revenue earner and pummelled by COVID

Tourism provides 39% of Iceland's annual export revenue and contributes approximately 10% to the country's GDP and 15% of the workforce. In 2017, 47% of Iceland’s newest jobs were in some way related to the tourism industry.

The COVID-19 pandemic’s impact on tourism left the country with another drop in jobs and an economic dip.

During the pandemic Iceland experienced a 10-month long halt in tourism. Iceland’s GDP dropped from USD24 billion to USD19 billion in one year, largely because of the loss of tourism between 2019 and 2020.

Transfer passengers back up to 73% of pre-pandemic levels

Moreover, Isavia estimates that transfer passengers will be almost 73% of what they were in 2019, doubling in May-2022 and increasing steadily until the autumn.

Icelandic airlines are reliant on the transfer trade, usually manifested in the form of individual airline sixth freedom carriage rights, and they have been since the immediate post-war days of Loftleiðir Icelandic, when intercontinental passengers between Europe and North America changed flights on the tarmac at Reykjavik Airport in the dead of night as if they were changing buses at the nearby bus terminal.

Icelandair, WOW Air and now PLAY are all locked into the international transfer side of the business

Later, Icelandair built its business model around an ‘off season’ focus on intercontinental transfer traffic, followed by WOW Air, which went out of business in 2019, and latterly by that airline’s successor, PLAY, which has many of WOW’s executives and was originally promoted as WAB air (“WeAreBack”).

Icelandair network map for the week commencing 09-May-2022

PLAY has extended the sixth freedom thin route principle even further with routes like Liverpool (UK) to and from North America – one that reportedly has attracted considerable customer interest.

PLAY intends to have 25 airports on its network by the end of 2022.

Tourism still focused on the short main season in most cases, but the off season is growing in some markets

Iceland’s main season was, and to a lesser degree today still is, concentrated on the period between May and September when there is more daylight than in most of the rest of Europe and temperatures get into double figures Celsius.

Conversely, during the winter months there is considerably less light. In January the sun comes up (when it does at all) at 1100 and sets at around 1500. ‘Sightseeing’ of glaciers, waterfalls and hot springs often takes place in the dark.

Since the 2010 volcanic eruption (and another one took place in 2021, close to Keflavík Airport, again prompting global interest) an abundance of indoor attractions have been added, mainly in Reykjavik, thus the country, or that part of it, does welcome more visitors now in the winter and potentially has a good season to look forward to in 2022.

The chart below shows the peak/trough nature of Icelandic tourism, which hardly varied during the pandemic.

It should be pointed out that while this chart is representative of arrivals from most countries, there are some statistical outliers.

The most notable one is the UK, which went from ‘aspiring’ to ‘mature’ market over the course of the past two decades and where the position is reversed, many people having now visited the country during the high season.

Even though the statistics are skewed by the overlapping travel restrictions in both countries, the trend now is for Iceland to be regarded as much as a winter short-break tourist destination from the UK, and that trend might spread to other European countries and possibly North America.

There will be 24 airlines at Keflavík this summer

Mr Garðarsson adds: “Isavia has not issued a passenger forecast since before COVID-19 due to the great uncertainty that has prevailed. Recovery is faster than we expected. According to the passenger assumptions we made at the beginning of Feb-2022, the total number of passengers at Keflavík Airport was expected to be almost 4.6 million. Now that number has risen by more than one million.”

There will be 24 airlines flying to and from Keflavík International Airport this summer, compared to 25 in the summer of 2019. There are now 75 destinations this summer, which is only slightly down on the 80 in the summer months of 2019.

Isavia expects the number of tourists in Iceland this year to be in the range of 1.4–1.5 million. Previous forecasts assumed 1.2 million passengers.

Seat capacity reached 2019 levels at the beginning of May-2022

Keflavík’s COVID recovery pattern, as measured by seat capacity, is outlined below.

Mr Garðarsson also pointed to 2022 being one of the largest construction years in the history of Keflavík International Airport.

According to the CAPA Airport Construction Database, total investment in the airport through to 2040 is USD2.4 billion, increasing capacity to 25 mppa, and covers terminal expansion, specifically a 4000sqm extension of the east wing of the passenger terminal; a new air traffic control centre; and a third runway.

When a contract was signed in Nov-2021 the runway was expected to be constructed by the end of 2022, with the terminal scheduled for completion in spring 2022.

In its most recent financial statement, for the full year 2021, Isavia reported revenue of ISK20.8 billion (EUR145.4 million), +41% year-on-year; but a net profit (loss) of ISK321 million (EUR2.2 million), which was reduced from a loss of ISK13.2 billion in the previous comparative period.

A ‘return to normality’ could be adversely affected if PLAY doesn’t play the part...

There is evidently high expectation in the air in Iceland that 2022 will see a return to the ‘normality’ that existed before the coronavirus pandemic, and most of the indicators are suggestive of that.

But there are some potential caveats.

Firstly, the challenge put forward to Icelandair by PLAY. At present, PLAY’s capacity share at Keflavík stands at 13%, which is much less than WOW achieved in its heyday, but it is set to grow quickly. Icelandair can live with that.

Once Icelandair’s total capacity share falls below 50% (currently 58%) it can take on a completely different demeanour. At the height of its competition with WOW it tried to take over that airline until it realised how bad its finances were.

Icelandair retains the size and scope to challenge PLAY directly by increasing capacity and dropping fares on the routes that PLAY operates, or neighbouring ones. The worst thing PLAY could do is to ‘play’ into Icelandair’s hands by expanding too far too fast, as WOW did.

And PLAY might benefit by looking to the east rather than the west for long haul routes, if it has the right equipment to fly them. WOW had just started a Delhi route when it folded, something Icelandair never did operate, or showed any intention of operating.

And once the pandemic is over, international travel from Asia Pacific is set to explode.

As the management of PLAY is similar to that of WOW, one might consider overexpansion very unlikely to happen, but the entire country is renowned for its economic bravado, which sometimes verges on recklessness.

...or if the population turns against mass tourism

Another factor to take into account is how the general population will take to being overrun by tourists once again. Although many people work in the tourist industry, not all do by any means.

The population is only 350,000, with broadly 200,000 of them in the Reykjavik metropolitan area – which is much the same size as a mid-ranking European town.

That is the equivalent of 455 million foreign visitors to the UK (population 67 million) – in 2018 there were actually 37.9 million.

Such are the numbers of tour buses turning up at the main sites within striking distance of Reykjavik, (the Gullfoss waterfall, Geysir hot springs and Thingvellir, the site of the original and world’s oldest parliament and of the tectonic plate dividing Europe and America) that they had to be rationed, while clearing up the daily detritus in what is promoted as one of the cleanest countries on Earth was a job that lasted long into the night.

In downtown Reykjavik, on the main shopping street, Laugevegur, it was possible even in the depths of winter to imagine you were in any country other than Iceland – the number of foreign tourists easily outstripped the number of locals, who complained that while they were able to buy any amount of tourist tat from a plethora of outlets, finding grocery shops and other essentials was getting ever harder.

And that isn’t to mention the loss of long term accommodation to short term tourist lets, which drove up the price of apartments and houses for the indigenous population.

So while the economic boost from the return of tourism may be considered invaluable in the short term, the attitude to tourism may well have changed during the past two years, as it has to air travel.

And that might well be something Isavia should factor into its forecasts.

Birgir Jónsson, CEO of the Icelandic start-up PLAY, witnessed the pressures of running an airline during his time at WOW Air.

Now, taking the positives from that operation and learning from the mistakes, he believes that PLAY will prove more successful serving Europe and North America from Iceland as well as bringing a low-fare option into the trans Atlantic market through its mid-Atlantic home.

The executive spoke to CAPA TV on the sidelines of the CAPA Airline Leader Summit - 'Airlines in Transition 2022’ about latest industry trends, the start-up of the airline, the operational efficiencies of the A320neo and A321neo in the markets being served, using Iceland’s location to its advantage, how low fares are key to its strategy, the need for additional peak capacity at airline’s Keflavík International airport hub, digital transformation in the industry and keeping control of the consumer, and the growing importance of sustainability.

Further Reading from the CAPA archives

The expansion of Akureyri Airport in the north of the country was reported on by CAPA in Jan-2022: Iceland’s second city airport gets terminal expansion; tourism boost needed

For more on the failed WOW air-Icelandair merger, refer to this CAPA report from Nov-2018: Icelandair-WOW Air merger: impacts Keflavik Airport and others