In the West Nordic region in the Atlantic Ocean (Greenland, Iceland and the Faroe Islands) Iceland has become the go-to destination for many people over the last 10 years. The other two countries are coming up on the rails in the way of attracting tourists but still have some way to go.

Under a new initiative Icelandair and Air Greenland are better coordinating their schedules by way of Keflavik Airport, which becomes the de facto international gateway for both countries. It should make all manner of travel easier between Iceland and Greenland and beyond, although not having flights directly into the downtown Reykjavik Airport may have a downside.

But the bigger issue here is whether this is a one-off decision or whether it will lead to wider airline and tourism cooperation within what is a definable region – one that offers visitors experiences they would be hard pressed to find anywhere else.

Icelandair and Air Greenland have announced that they have signed a letter of intent (LOI) to increase cooperation in linking their networks.

They are two of three flag carrier airlines for the West Nordic countries in the North Atlantic – the other being Atlantic Airways of the Faroe Islands.

Iceland got its independence from Denmark in 1944, but Greenland and the Faroes remain semi-autonomous Danish dependencies.

Iceland, Greenland and the Faroe Islands 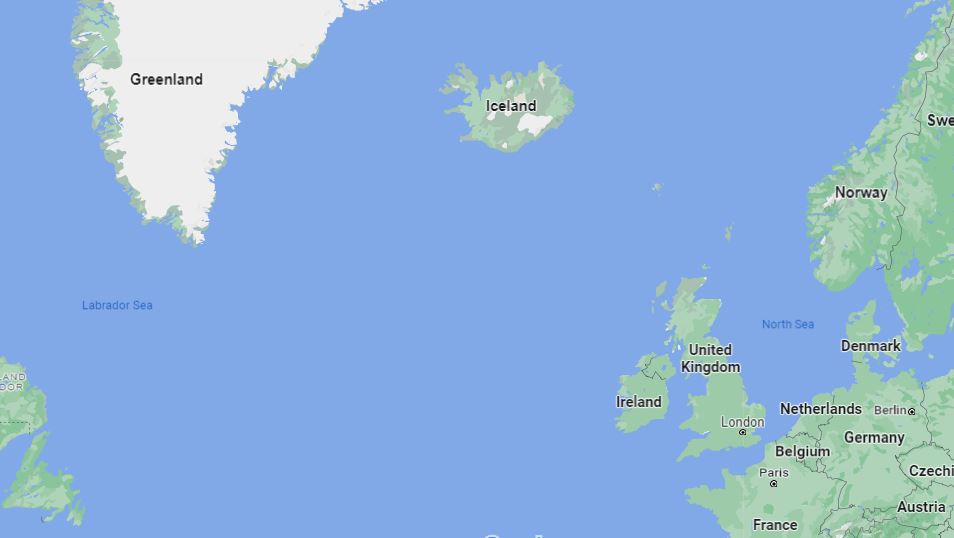 The total population of all three countries together is only 472,000, and the population rate per square kilometre is one of the lowest in the world.

But they attract a disproportionate number of tourists – especially Iceland, where annual tourist numbers are typically more than five times the indigenous population – and they often work in unison to promote the North Atlantic region for tourism purposes.

NB. 2010 is selected as the start date as that was the year of the volcanic eruption in the Eyjafjallajökull glacier, which kick-started a rapid growth in tourism to Iceland, together with a fall in the value of the krona.

There is no tourism chart for Greenland, but tourism increased significantly between 2015 and 2019, with the number of visitors increasing from 77,000 per year to 105,000. (Source: official statistics report).

The latter number, 105,000, is almost twice the population of Greenland.

There are probably too many tourists in both countries, but they bring in too much money to be cancelled

Several agencies consider both countries to be overpopulated by tourists, and there has been some adverse reaction among the indigenous population in Iceland, where in the height of the main summer season it is often a case of ‘spot the Icelander’ – even in the capital, Reykjavik.

But they are both too reliant on the income the tourist business provides to consider capping it, let alone reducing it.

The tourism sector directly contributes around 9% of GDP in Iceland, employing 16% of the workforce, while Greenland, which is not as well developed touristically, was making around USD67 million a year from tourists in 2019 before the COVID-19 pandemic, and that figure is less than 3% of GDP.

The Faroe Islands are better equipped to act as a semi-independent entity.

The weather, bleak as it is, is more hospitable than is Greenland’s; but the latter, the largest country of the three by far, has to offer, by way of its location, long haul services just to reach the capital city of the supporting state, Denmark.

Air Greenland (as ‘Greenlandair’) did attempt to operate services to the east coast of the United States in the late 2000s, and even to promote connecting flights from Europe, but they were not sustainable.

In stark contrast – during a period of more than 60 years Icelandair has built a trans Atlantic brand in its various incarnations, offering extensive travel options between Europe and North America using the ‘Sixth Freedom of the Air’ principle. This has permitted ‘one change’ travel that otherwise would be much more time consuming between secondary level cities on both sides of the Atlantic.

More importantly, it has enabled Icelandair, the national airline despite its private ownership, to offer a wide range of destinations for Icelandic travellers (who count among the most frequent travellers in the world) and equally ease of access to Iceland for business and leisure tourists abroad, and year-round.

The strength of the Keflavik hub is clearly illustrated in Icelandair’s current network.

But there are also five points in Greenland that are served, either from Keflavik International Airport, the main gateway, or the Reykjavik (domestic, downtown) airport, and a reallocation of these services between airports forms part of the cooperation agreement.

Increasing connectivity through Keflavik Airport is the aim

The airline companies – Icelandair and Air Greenland – see common opportunities for cooperation that will link their networks: Air Greenland's extensive network in Greenland and Icelandair's network from Keflavik International Airport, which is to be extended.

The cooperation will benefit both companies' customers and increase connectivity in their markets to, from, via and within Greenland and Iceland.

Icelandair has now integrated its regional operations with the international network by moving services to destinations in Greenland from Reykjavik Airport to Keflavik International Airport. This change provides more convenient connections to and from Air Greenland's extensive network in Greenland to Iceland and Icelandair's extensive route network in Europe and North America.

In other words, international travellers bound for the main towns or remote destinations (many of which are served by helicopter) alike in Greenland will not have to change between airports in Reykjavik (and Keflavik is 50km/31 miles away from the city centre area of Reykjavik, even if the road connection has been much improved and a high-speed rail connection that is to be built through a lava field, part of which erupted twice in the last year, is planned).

And of course, the reverse is also true.

Greenland too has its leisure, VFR and business travellers, and has developed commercial and other exportable skill sets of its own, especially those connected to the fishing industry, environmental research and social issues.

The one potential downside is that there is no longer a travel option between the Greenland airports and Reykjavik Airport.

That facility may close eventually anyway. That is one option, along with retaining it and building a new one. (And coincidentally, ironically even, domestic flights within Iceland continue from Reykjavik Airport. A direct service from Keflavik to Akureyri, the ‘second city’ in the north was tried but was not economically sustainable).

There is no prospect of any air services operating between Keflavik and Reykjavik, either in isolation or as part of a multi-sector domestic (e.g. Keflavik-Reykjavik-Akureyri) service or international (e.g. Reykjavik-Keflavik-Kangerlussuaq) one.

That means that two- or multi-centre vacations involving Iceland and Greenland are rendered slightly more difficult, because the surface transport journey to and from Keflavik can take up to two hours at busy times, taking into account bus availability and demand.

Most people on such vacations would welcome flying directly into and out of the downtown airport, as to/from the city centre is walkable, at only 1.5 km distance.

Ideally, this cooperation should presage a more comprehensive regional programme

All this raises a wider question about the development of tourism throughout these three West Nordic countries and what can be done to promote it further without damaging the environment, which is its major selling point.

There will be – for sure – ever-growing demand for the three countries, all of which can be combined, at a pinch, on a one-week or 10-day vacation, and which are all quite different from each other. Middle class Chinese and Indians, suffocating in their overpopulated, congested, smog-bound cities, would love it.

This action may or may not go some way towards easing the journey of travellers between Iceland and Greenland, but what is really needed to untap the full potential of travel to the West Nordic region is a much broader cooperation, possibly including an international/domestic pass system, between all three of the flag carrier airlines. That might possibly stretch to include external private carriers such as Iceland’s LCC 'Play'.