Iberia’s 2013 pre-exceptional operating loss was an improvement on its 2012 result, but it has now seen six successive years of losses and has accumulated more than EUR1.1 billion of operating losses since 2008. Over this period, capacity cuts have not been matched by cost reduction, but revenues have tumbled more rapidly.

This reflects the difficulty in cutting the significant fixed costs in the airline business, particularly in a highly unionised legacy carrier, and the lag between the reduction of capacity (and revenues) and the removal of costs.

It has been a long path, and the end has not been reached, but the 2013 results suggest that the restructuring of Iberia may now be having a beneficial impact on its financial performance. Moreover, recent productivity agreements with unions give some reassurance that industrial relations are also on an upward path. Sustainable levels of profitability are far from assured, but, with a return to profit slated for Iberia in 2014, they can at least now be contemplated. 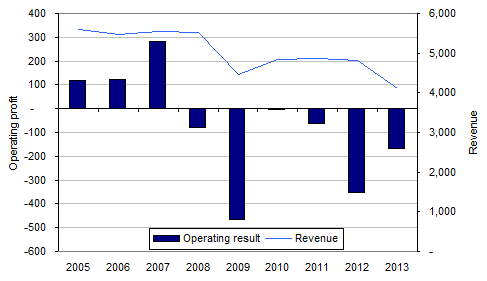 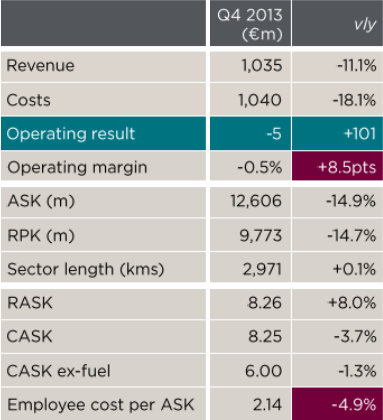 In the early stages of the merger, IAG’s diagnosis of Iberia’s problems was that labour productivity was low and salary levels were uncompetitive. This is borne out by CAPA’s analysis of the labour productivity of European airlines, based on 2012 reported results.

Faced with difficult union negotiations over solving these problems directly and immediately, it created Iberia Express to give itself bargaining space and also launched the Iberia Transformation Plan. Iberia Express is a short-haul operator, designed to carry feed to and from the Madrid hub at a lower cost than the mainline Iberia operation.

Headcount reductions are ahead of the Mediation Agreement

The success of Iberia Express, and the Mediation Agreement of Mar-2013, has helped management to bring pilots and cabin crew unions in the mainline carrier to agreement over improved productivity.

After a phase of very challenging industrial relations, the Mediation Agreement of Mar-2013 provided for headcount reductions and pay cuts. Pilots and cabin crew had a 14% salary reduction and ground staff underwent a 7% reduction. The Agreement also imposed an incentive to reach agreement on productivity improvements, by imposing a further 4% salary cut that would be returned upon reaching a deal on productivity.

During the course of 2013, Iberia reduced headcount by 2,507, a reduction of 12%. This rate of reduction was more or less uniformly achieved across all the key staff groupings of pilots, cabin crew and ground staff. From the date of the Mediation Agreement in Mar-2013 to the end of the year, job cuts proceeded slightly faster than originally planned. 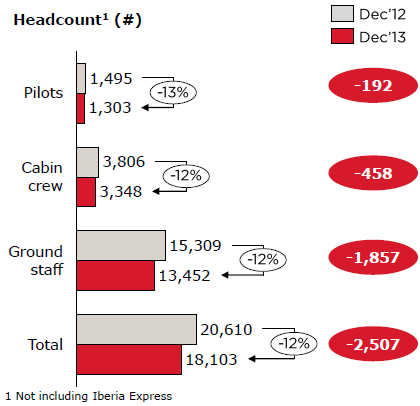 Under the Mediation Agreement, savings of EUR196 million were achieved in 2013, with EUR97 million from job cuts and EUR99 million from pay cuts. 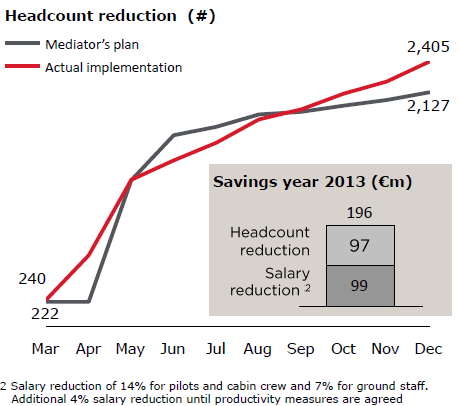 In Feb-2014, IAG announced that Iberia had reached agreement in principle with the pilot union SEPLA “to introduce permanent structural change and improve the airline’s viability”. The agreement is subject to the approval of SEPLA’s general assembly and Mr Walsh hopes this will happen in a few weeks’ time (speaking at IAG’s 2013 results presentation).

It involves productivity measures including increasing flying hours in line with Iberia’s most efficient competitors and changes in crew complement. It confirms the 14% pay cut of the Mediation Agreement, but provides for the return of the additional 4% cut.

The SEPLA agreement keeps salaries and allowances frozen until 2015, after which increases will be linked to Iberia’s profitability. The maximum increase will be 3.5%, out of which up to 1% will be retained in the base for the following year. Importantly, too, new pay scales are established, with new entry pilots starting on a salary of around EUR35k in short-haul. In addition, new caps in the seniority scales will reduce long term seniority driven wage inflation.

The new agreement also provides for a possible extension of a voluntary redundancy plan for pilots. The Mediation Agreement provided for 258 pilot redundancies and so the new accord increases Iberia’s flexibility to adjust its pilot complement in accordance with market conditions and strategic priorities. 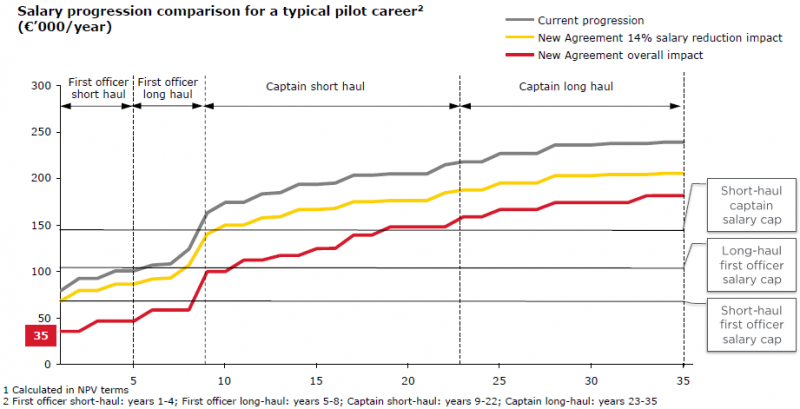 The SEPLA agreement also allows for the continued operation of Iberia Express as an independent company with its own pay scale. Pilots may transfer between Iberia Express and the mainline operation without changing the former’s pay structure and conditions. Mainline pilots transferring to Express will receive a one-off compensation payment. Under the agreement, Iberia Express may grow its fleet to 25 aircraft by 2017, from the existing 18 (according to the CAPA Fleet Database, Iberia Express has 18 Airbus A320 aircraft as at 4-Mar-2014).

Crucially, the group now has flexibility to grow both Iberia-branded operations on its short-haul network and to deploy pilots between the two. As Iberia executive chairman Luis Gallego said, “Iberia Express will help make Iberia profitable and stronger, by providing short-haul feed, and will provide Spanish competition to low-cost carriers”.

Mr Walsh does not see any problem of brand confusion between Iberia and Iberia Express. On the contrary, he believes that there is an “opportunity to do things with Iberia Express that we might not do with Iberia”. For this reason, it was “important to secure the ongoing independence of Express”.

In spite of the recognition in the SEPLA agreement of Iberia Express’ right to grow, this may remain a source of some discontent among pilots. As previously reported by CAPA, the union’s chief Justo Peral said “it now makes no sense to continue Iberia Express” in light of the productivity agreement and it would only be “logical” to continue operating the LCC with a “limited fleet” and to be used to fend off other LCCs from Madrid Barajas Airport, given its operating costs (Preferente, 20-Feb-2014).

Iberia’s agreement with cabin crew also provides for improved productivity, through increased flying hours, more duty days and new working practices for short haul. As with the pilots, the 14% pay cut is confirmed and the additional 4% cut is returned.

The same terms apply regarding a pay freeze to 2015 and subsequent increases being linked to Iberia’s profitability. New starting salaries will be set at around EUR20k, “market levels” according to Iberia, and technical changes to seniority and promotion levels will reduce seniority-driven wage inflation. There may also be a possible extension of a voluntary redundancy plan beyond the 627 cuts in the Mediation Agreement.

Ground staff are yet to reach agreement

“The fact that we have agreement in principle with pilots and cabin crew is a very significant move forward”, Mr Walsh told analysts at the IAG results presentation. “We are clearly optimistic that we can reach agreement with the ground unions…, but, if I was to classify them in terms of significance, I would say the pilots and the cabin crew are significantly more important…, because it does enable us to do certain things…”. 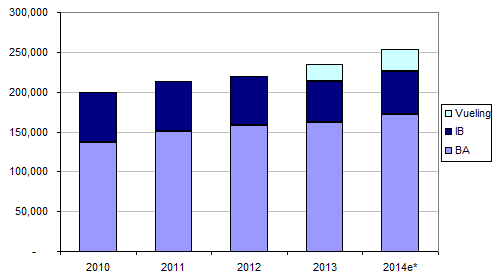 Nevertheless, this growth in 2014 is mainly a bounce-back from capacity that was lost to strike action in 2013 and Mr Walsh remains cautious about expanding Iberia until its restructuring is fully complete. “We still need to assess what the underlying demand environment is like in Spain”, he told analysts, “we still believe there is room for further economic recovery before we are encouraged to commit any additional capacity to the market, but I think it’s going in the right direction”.

IAG remains resolute in leaving Iberia out of its significant new aircraft orders until its recovery is fully established. This does risk further erosion of its historically strong position from Europe to Latin America, for example at the hands of Air Europa, but Mr Walsh is right to wait until there is more evidence that Iberia can generate a sufficient return on any investment.

“The big improvement is going to be coming from cost reduction”

Since its last year of profit in 2007, Iberia has seen its CASK increase by 3% and its RASK fall by 6% (to 2013). Although RASK recovered somewhat from the slump of 2009, the chart below highlights that CASK reduction is likely to remain the key to restoring sustainable profitability. 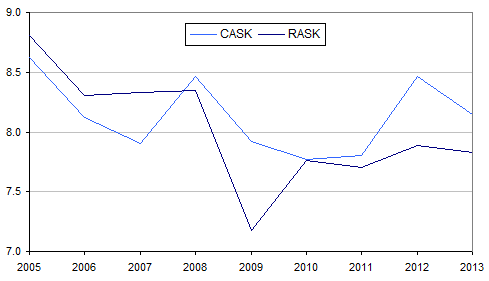 This was recognised by IAG CFO Enrique Dupuy at the 2013 results presentation, when contemplating a planned return to profit for Iberia in 2014. “The big improvement is going to be coming from cost reduction”, he said.

“…the landscape is completely different”

It seems that the battle to save Iberia from losses mired in an unproductive labour force is on the way to being won. This is an all-too-rare example of an airline management team setting a clear path and sticking to it, in the face of strong opposition from unions.

IAG has not deviated from the message that the only alternative to restructuring is for Iberia to shrink further and to risk becoming financially unsustainable. This message has also been reinforced by Mr Gallego, who was appointed by IAG CEO Willie Walsh to run Iberia in Mar-2013.

Mr Walsh was not being complacent when he told analysts: “When I look at where we are with Iberia today and where we were 24 months ago, or even 12 months ago, the landscape is completely different”.

Mr Walsh recognises that there is still work to be done: “We will bring Iberia into profit; it’s not going to be a level of profitability that’s acceptable this year, but it’s going in the right direction. There is a significant turnaround in financial performance, a significant improvement in the brand positioning of Iberia and the quality of Iberia in the Spanish market and in the markets it’s operating in…”.