Shares in Iberia were up (+0.8%), while British Airways eased (-2.0%) as the UK carrier’s CFO, Keith Williams confirmed negotiations regarding a potential merger with the Spanish carrier have intensified.

Mr Williams told Bloomberg, “we have met the Iberia management team on a few occasions now and the talks have picked up pace…If we follow what is being said in Spain and the economic slowdown they are seeing there, a number of commentators can now clearly see the benefits for Iberia in a merger".

Iberia announced last week that it intends to reach a pre-agreement on the merger by the end of Sep-2009. Meanwhile, BA expects to gain approval for its proposed antitrust immunity with American Airlines and Iberia from the US by the end of Oct-2009.

Lufthansa getting closer to JetBlue

Shares in Lufthansa were up 0.2% yesterday, as the Frankfurt DAX closed 0.7% higher. The German carrier confirmed its commercial cooperation with US-based JetBlue would offer extended travel options in the USA and Puerto Rico by the end of Sep-2009, pending approval by the US Department of Transportation. The agreement will initially offer connecting services between 12 JetBlue destinations and Lufthansa’s network of 180 destinations in Europe, the Middle East, Africa and Asia. 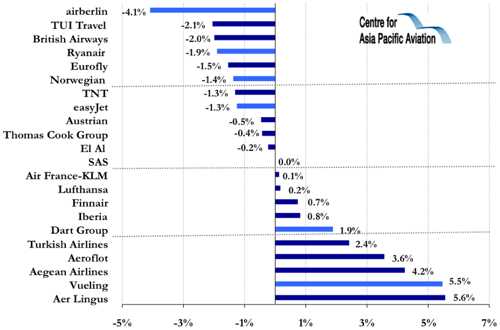