European airline shares declined on Thursday (23-Sep-2010) as the wider market fell on news Ireland’s GDP was down 1.2% in 2Q2010, compared with 1Q2010. However, markets made some recovery in afternoon trading after a rise in US home sales.

Iberia (+0.8%) rose after it confirmed it will not exercise its right to terminate the merger agreement with British Airways, having reviewed BA's pension recovery plan to its satisfaction. The merger is still subject to approval by both airlines' shareholders.

The carrier also gained on news the Spanish Government reached an agreement with unions on the minimum transport services on the day of the General Strike on 29-Sep-2010. Under the agreement all the country's airports will open, and that 40% of intercontinental, 20% of European and 10% of national services will be operated. There will also be 50% coverage on services from the mainland to the islands and on services between the islands. Iberia stated it would relax penalties for flight cancellations in relation to the proposed strike.

Martinair to stop commercial services and focus on freight

Air France-KLM (-1.9%) declined after KLM subsidiary, Martinair, stated it would suspend the commercial operations of its four B767 aircraft by 2011, to focus on freight transportation. Approximately 600 of the company's 1,800 employees would be affected by the decision. The carrier currently has 11 aircraft dedicated to its freight services.

Norwegian Air Shuttle (-3.5%) suffered the biggest decline of the day. CEO, Bjoern Kjos, stated the LCC plans to order widebody aircraft from either Boeing or Airbus in Oct-2010 as it prepares for the launch of its first long-haul routes. 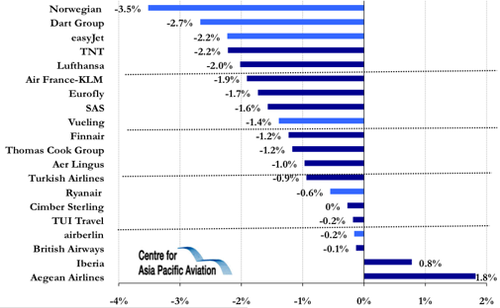