European airline shares ended Wednesday’s (22-Sep-2010) session lower after wider markets tumbled to a two-week low. Markets were down on the US Federal Reserve’s downbeat analysis of the economy.

Iberia (-2.3%) declined after notifying the Spanish Securities Market Commission (CNMV) of its decision not to exercise its right to cancel the merger contract with British Airways (-1.2%) in relation to the agreement reached between the latter and the trustees of its pension funds. This decision represents another step forward in the merger process, which will be completed when the Shareholders General Meeting takes place, expected in Nov-2010. British Airways’ employees' pensions deficit of GBP3.7 billion has been point of contention in the planned merger and gave Iberia an escape clause if it was unsatisfied with BA’s plans. In Jun-2010, BA announced a recovery plan to address the pension deficit setting aside at least GBP330 million p/a until 2026.

Lufthansa (-1.9%) was also down, after Nomura Holdings Inc. cut its rating of the carrier’s shares from "buy" to "neutral". During trading, the carrier approved the acquisition of 40 Airbus aircraft and eight Embraer regional jets. The order is valued at approximately EUR3.5 billion at list prices. The orders comprise: 20 A320 family aircraft and three A330-300s for Lufthansa; eight E195s for Lufthansa Regional; Two A320s, two A321s and five A330-300s for SWISS and; eight A319s for Germanwings. The Lufthansa Group's Airbus order backlog has increased to 91 aircraft.

Ryanair (-2.4%) slumped after CEO Michael O’Leary stated the LCC's future growth rate is likely to slow to 5% or lower.

The carrier plans to increase fixed salaries for executive board members by up to 25%, at the same time reducing bonus payments to conform with legal requirements.

Elsewhere, SAS (-3.4%) plummeted. Estonian Economic Ministry formally signed the sales-purchase transaction for Estonian Air during the day, increasing its stake to 90%. SAS will sell the majority of its 49% stake in the carrier, reducing its ownership level to 10%. 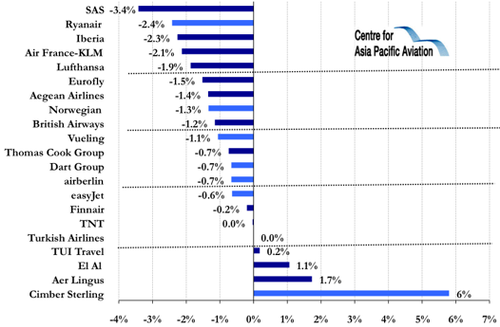