Iberia (-1.5%) and British Airways (-1.2%) declined with the majority of European airlines on Friday (26-Nov-2010) ahead of a final vote by shareholders on the GBP5 billion merger at a meeting in London today (29-Nov-2010). Shareholder approval, which is widely expected, will lead the way to the creation of International Consolidated Airlines Group (IAG).

SAS (-3.0%) was one of the biggest decliners of the day after competitor Icelandair Group raised (26-Nov-2010) its EBITDA forecast for FY2010 from ISK10.5 billion (EUR68.8 million) to ISK11.5 billion (EUR75.3 million) as the group reports positive operational results in 4Q2010 so far and forward booking remains “promising”.

Lufthansa (-1.7%) also declined for the day after subsidiary Eurowings stated its pilots staged a half-day strike in Germany during trading to protest planned job reductions. The strike grounded 46 services. Vereinigung Cockpit stated services were cancelled at Berlin Tegel, Dresden, Duesseldorf, Hamburg, Cologne and Nuremberg Airports. Some 140 of the carrier's 305 pilots participated in the strikes. Lufthansa plans to reduce the carrier's fleet from 34 to 15 aircraft resulting in the loss of 180 pilot jobs.

Thomas Cook Group (+1.7%) was among the few gainers for the session. CEO Manny Fontenla-Novoa stated the company is seeking to agree on a JV with a Chinese travel company by 2012. China is the third part of the company’s emerging markets strategy which also includes India and Russia. The agreement is likely to be similar to the one Thomas Cook completed with the Russian venture Intourist. 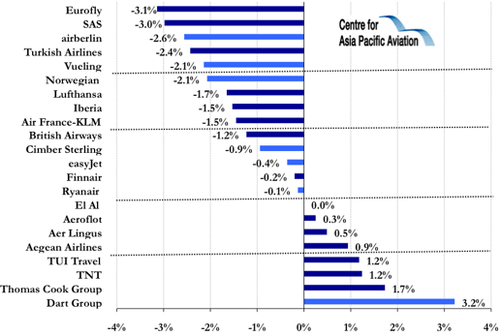