Iberia and British Airways shareholders to vote on merger next week; airberlin down

Iberia (+4.5%) rose on a day of mostly gains for European airline shares on Friday (19-Nov-2010). The carrier gained on news British Airways (-0.9%) and Iberia’s shareholders will vote on their GBP5 billion merger on 29-Nov-2010. The merger is widely expected to gain shareholder approval, which will see the formation of holding company International Airlines Group, which will oversee a staff of 57,000 and a fleet of 408 aircraft.

Elsewhere, Norwegian (+6.6%) also continued to gain after last week expanding its contract with Star Tour. Eurofly (+4.5%) was also up. 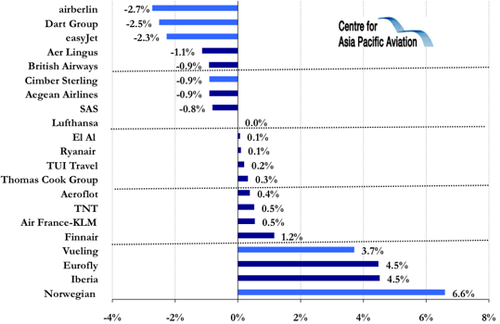