European airline shares finally made gains on Wednesday (21-Jul-2010) as wider markets rose for the first time in a week. Markets were pushed higher by the banking sector after better than expected financial results from US bank, Morgan Stanley.

Iberia (+5.6%) and British Airways (+5.4%) were the day’s biggest gainers after the carriers confirmed they have received the final regulatory approval, along with American Airlines, to operate a joint business on trans-Atlantic routes. The oneworld alliance airlines have been granted anti-trust immunity from the US Department of Transportation (DoT), following European Union approval on 14-Jul-2010. The airlines plan to launch the trans-Atlantic joint business this autumn and will co-operate commercially on flights between the EU, Switzerland and Norway and the US, Canada and Mexico. Fellow oneworld members Finnair and Royal Jordanian also received antitrust immunity from the US DoT.

easyJet's (+0.8%) gains were dampened by news the carrier has been given 90 days by founder, Sir Stelios Haji-Ioannou, to address its punctuality issues. Sir Stelios Haji-Ioannou stated that if the LCC fails to resolve the issue, he will withdraw the brand license and the airline will be forced to change its name. Sir Stelios’ warning follows recent reports that showed that over 50% of easyJet’s Gatwick services were late. 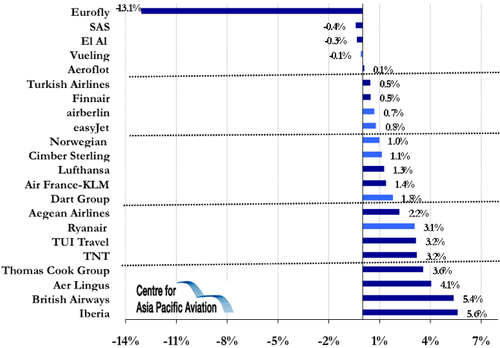