The outlook for the world’s airlines in 2010 and 2011 received a further boost with IATA again upwardly revising its 2010 outlook on an “exceptionally strong third-quarter performance” and a “stronger-than-expected cyclical rebound in airline profitability”.

In achieving this performance, the industry has benefitted from a substantial improvement in yields, an upturn in the market and improved capacity management resulting in improved supply-demand conditions. However, margins remain low and the sector's recovery is patchy with European carriers under-performing those in other regions. The recovery is also expected to “pause” in 2011 after the strong post-recession rebound with “tougher conditions” expected in 2011.

On the outlook, IATA noted: “Airline profit cycles usually last 7-10 years, from peak to peak, implying that there are 4-5 more years to go before this cycle peaks. Nonetheless next year, 2011, may see smooth upward progression being interrupted as oil and jet fuel prices rise and some economies in Europe look set to be driven back into recession by debt crises.” 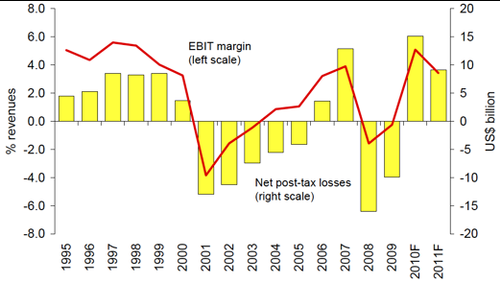 Almost doubling of net profit estimates for 2010 and 2011

With the upgrade, IATA, representing 230 airlines covering 93% of scheduled international traffic, has almost doubled its estimates for 2010 and 2011 net profitability from forecasts made in Sep-2010.

IATA is now projecting a profit of USD15.1 billion in 2010, an upward forecast from the USD8.9 billion forecast in Sep-2010, which was in turn up from the USD2.5 billion profit forecast in Jun-2010 and a USD2.8 billion loss forecast as of Mar-2010. The profit outlook was based on an improved forecast of passenger traffic growth of 8.9%, up from a previous estimate of 7.7%, while average oil prices were in line with previous projections of USD79/ barrel. Comparatively, the industry lost USD9.9 billion in 2009.

For 2011, a net profit of USD9.1 billion in now anticipated, a notable improvement from the previously projected USD5.3 billion.

However, IATA noted that the industry’s profits would be hit by stable yields, rising fuel prices and weak traffic volumes originating from the developed economies cause some slippage in airline profits next year. The yield forecast for 2010, meanwhile, has remained unchanged at 7.3% to decline to 0.5% growth in 2011. 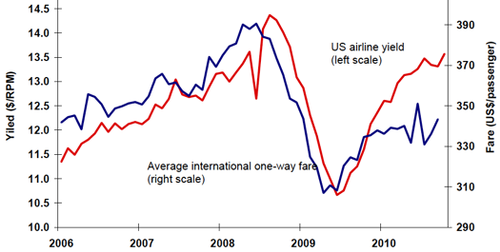 Net margins are expected to fall from an anticipated 2.7% in 2010 to 1.5% in 2011, but represent an improvement from -2.1% in 2009. Mr Bisignani labelled these margins as “pathetic”, continuing: “If airlines were charity organisations, this would be a great result.  As a business, it clearly shows that we remain a sick industry. We are not even recovering half the cost of capital which is 7-8%.  Even in a profitable period, the industry continues to destroy shareholder value.” 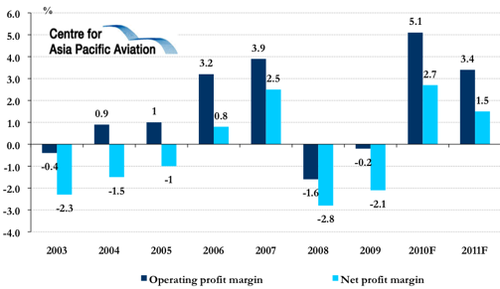 Airline revenues are expected to total USD565 million in 2010, an increase from the previous revenue forecast of USD560 billion. Revenues of USD598 billion are forecast for 2011 with this comparing to USD482 billion in 2009.

IATA, meanwhile, has trimmed its forecast for air cargo growth, an important indicator of world trade and hence economic recovery, from 19.8% to 18.5% as the post-recession rebound from restocking abated. The freight yield growth was also reduced from 7.9% to 7.0%.

IATA added that passenger and cargo demand is expected to increase by 5.2% and 5.5% respectively in 2011, both slightly better than previous forecasts of 4.9% and 5.3%, while the average oil price was expected to rise to USD84/barrel next year. Yields are also forecast to be better-than-expected at 0.5% up from a previous "flat" forecast. 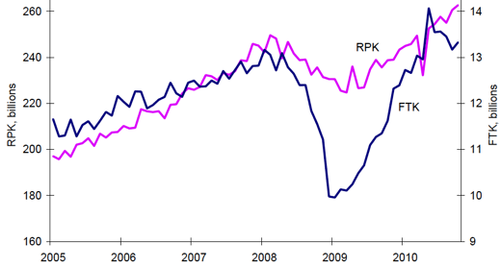 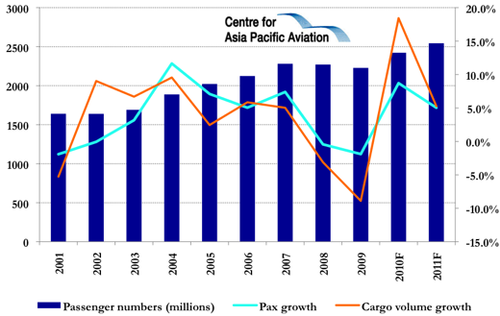 IATA also noted that the USD6.2 billion upgrade to raise forecast net profits in 2010 to USD15.1 billion represents just 1.1% of revenues. IATA stated: “Because profits are so small, relatively minor improvements in revenues or costs can generate large changes in profits.”

IATA also expressed concern that the cyclical rise in profits represents a rise to just over 4% in returns on invested capital”, with IATA labeling this as “very inadequate”. IATA continued: “It shows that the industry can pay its bills, renew its fleet and service its debt. However, it still cannot offer any return to its owners and shareholders for the risk they undertake. Despite the cyclical rebound in profits, the structural challenges that keep profitability in the industry inadequate, remain.” 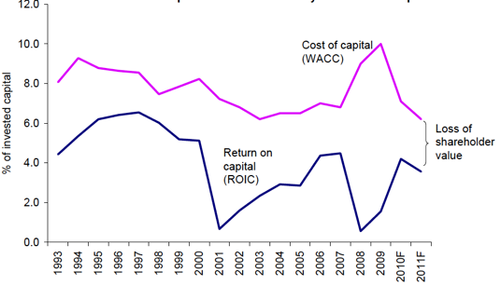 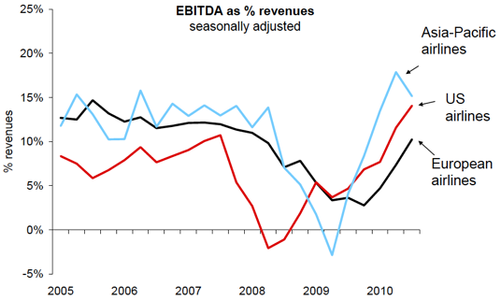 Geographic differences will continue to remain. Emerging markets such as Asia Pacific look set to continue to grow strongly but a weak Europe is expected to make the business environment for airlines more challenging than it was in 2010. Traffic, both freight and passengers, meanwhile, has returned to pre-crisis levels.

In 2010, more than half the profit is expected come from Asia Pacific carriers at USD7.7 billion in 2010.  This is the largest absolute profit ever for this region with IATA noting that “the power of China is driving this forward”. The US contributes another third with USD5.1 billion. This is largely the result of the capacity cuts that started when fuel spiked in 2008. The other star is Latin America, which is delivering a further USD1.2 billion, completely disproportionate to its 4% share of industry revenues.

IATA also noted that rapidly developing markets are shifting the industry’s centre of gravity to the East. There has also been a big shift in “where the money is measured in market capitalisation”. Today, the largest airline in the world is Air China at USD20 billion, followed by Singapore Airlines at USD14 billion, Cathay Pacific at USD12 billion, China Southern at USD11 billion, LATAM USD15 billion (LAN USD11 billion and TAM USD4 bilion), and then Delta and Lufthansa at USD10 billion each.

While IATA noted that “any increase in profits is a welcome step in the right direction”, there is still considerable weakness in the industry. Of key concerns is that despite a 70% improvement in the profitability forecast for 2010, net margins will stand at just 2.7%, with IATA commenting that this shows “just how far this industry has to go to achieve a normal level of profitability”.

Mr Bisignani labeled these margins are “pathetic” adding that it highlights that the industry remains “fragile and balancing on a knife edge.” He also warned: “Any shock could stunt the recovery, as we are seeing with the results of new or increased taxation on airlines and travelers in Europe.” 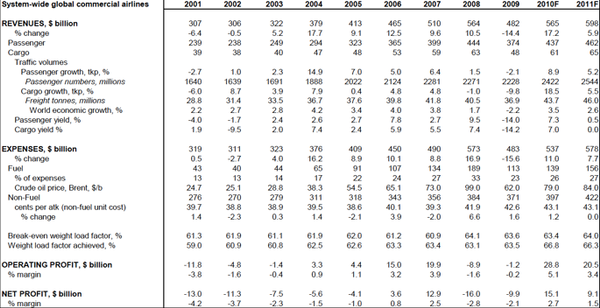